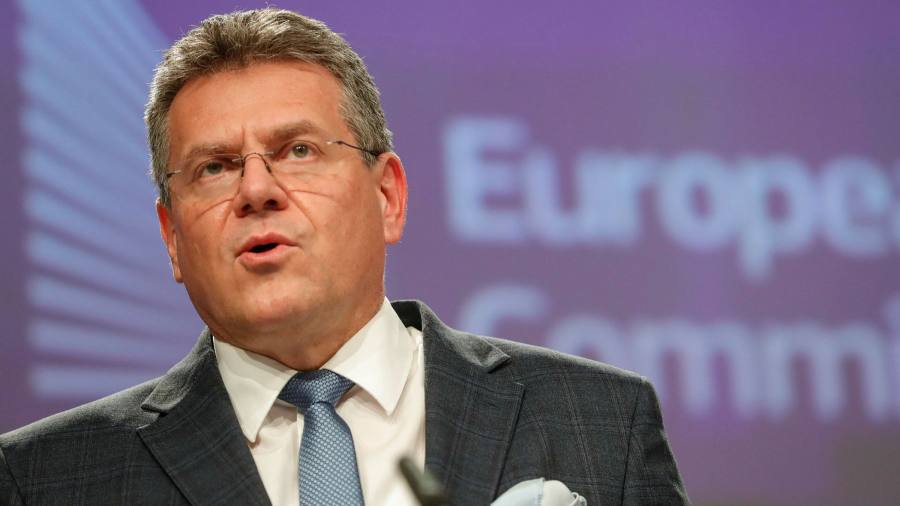 Brussels wants to formalise a series of proposals aimed at easing frictions on the border between Great Britain and Northern Ireland, as it seeks ways to address the stand-off with UK prime minister Boris Johnson.

Maroš Šefčovič, the EU’s Brexit negotiator, told MEPs this week that he wants to turn a previously proposed EU package of solutions to the trade row into draft legislation to show that they provide workable ways around the impasse over the Northern Ireland Protocol, which governs post Brexit trade on the island of Ireland.

The move comes as the commission is urging the UK to engage over the protocol after London announced plans to table legislation of its own that would override parts of the deal.

Šefčovič also told MEPs that the bloc was ready to take retaliatory measures if the UK went through with its threat to disapply measures in the protocol.

Commission officials told the FT that they are working on a package of possible goods to hit with tariffs, although Brussels’ first step would probably be to restart legal action against London for failing to implement full border checks in Northern Ireland. It paused the process in July 2021 to support negotiations between the two sides.

In the past the EU has also discussed scrapping the post-Brexit Trade and Cooperation Agreement should the UK ditch the protocol. This would introduce tariffs on all UK goods exports to the single market, and it remains a last-resort option for Brussels. 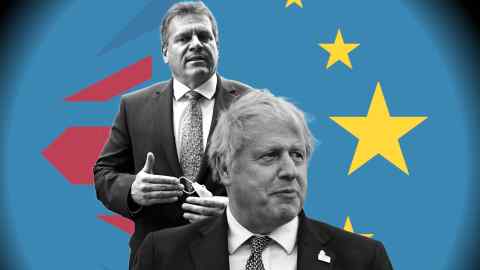 London says it has to act unilaterally on the deal because of political tensions in the region. On Friday, Northern Ireland’s Democratic Unionist party blocked the election of a new speaker at the region’s legislative assembly until the protocol was scrapped, effectively blocking the formation of an executive.

The DUP and other unionists, who want to remain part of the UK, argue the deal undermines the region’s ties mainland Britain because it puts a trade border for goods in the Irish Sea to avoid one on the island of Ireland.

However, Šefčovič has told the Financial Times that it would be “unacceptable for us” if the UK attempts to rewrite elements of an international agreement that was less than two years old.

Šefčovič reiterated in the private meeting with MEPs that the EU would not renegotiate the protocol, but said the commission was ready to show its willingness to find solutions to problems affecting trade by transforming a package of ideas into legal text.

The commission last year put forward legislative proposals to ensure the continued supply of British medicines not approved by the EU to Northern Ireland in a bid to address worries about access to drugs in the region. The new rules were adopted by the EU’s council of ministers in April following a vote in the European parliament.

They were part of a wider package of measures Šefčovič published in October, the remainder of which he is now prepared to put into draft legislative form. These include creating “red and green channels”, in which goods that were clearly destined to remain inside Northern Ireland, such as supermarket deliveries, would only need to provide a single customs form per load.

Brussels would also cut health checks on animals and food by 80 per cent. But the offer depends on the UK granting full, real-time access to its customs databases.

EU ambassadors gave Šefčovič broad support for his plan at a meeting on Wednesday, according to diplomats briefed on the encounter.

“There will be a calm and graduated response,” said one, who added: “several member states referenced the Ukraine/Russia war and were very annoyed that the UK would go down this route at the moment”.