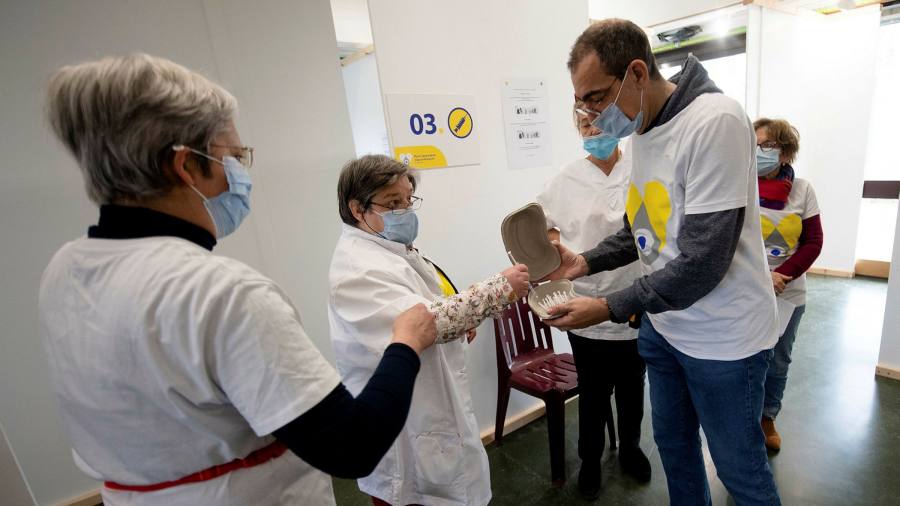 The European Medicines Agency has said there was a “clear scientific conclusion” that the Oxford/AstraZeneca vaccine was “safe and effective”, days after more than a dozen European countries halted use of the jab.

Emer Cooke, head of the EMA, said on Thursday that the agency had concluded that the vaccine was “not associated” with an increased risk of blood clots that had been noted recently by some scientists, adding that the benefits of the vaccine outweighed any possible risks.

But Cooke said that based on the evidence currently available, the drugs watchdog still could not rule out “definitively” a link between more rare and more serious side effects reported recently. The agency recommended a campaign to raise awareness about adverse events that would “help to spot and mitigate any possible side effects”, Cooke said.

The EMA decision comes days after more than a dozen European nations suspended or limited use of the shot, dealing a fresh blow to the continent’s ailing vaccination campaign and further denting confidence in the Anglo-Swedish company’s jab.

While countries including Austria and Italy had already suspended batches of the AstraZeneca vaccine, this week’s wider suspension came after German researchers noted an apparent raised incidence of rare blood clots that led Berlin to halt its inoculation programme.

The unexpected rise in serious and rare side effects included cerebral thrombosis coupled with a lowered count of the particles that help blood clot.

The UK drugs regulator on Thursday said that five such blood clots had been recorded in the UK after administration of the vaccine, but stressed that no link had been established, urging Britons to continue to take the vaccine.

The AstraZeneca jab has faced multiple challenges since it came on to the market. Early data generated by clinical trials were criticised by some experts as being inconsistent. Some European nations also limited use of the vaccine in some age groups, citing a lack of population-specific data.

Those fears appeared to be easing in recent weeks as evidence emerged from the UK, where it has been administered to millions of people, until this week’s blood clot-related suspensions.

Some have decried this week’s moves to suspend use of the vaccine as political, citing the fact that several European capitals co-ordinated their suspensions.

But politicians in France and elsewhere have also signalled they are ready to resume vaccinations with the AstraZeneca jab as soon as possible if they are given the green light by the EMA.

The EMA’s endorsement comes as the UK health service warned that supplies of the AstraZeneca vaccine would be squeezed in the next month, potentially complicating what been a highly successful vaccination campaign that has rolled out shots to nearly 22m people.

The UK is far ahead of its European peers in vaccinating its population, with the FT’s vaccination tracker showing that, as of Monday, the UK had administered 40.5 doses per 100 individuals, versus the EU’s 11.8.

European countries have struggled to secure vaccine supplies, with AstraZeneca disclosing recently that it is aiming to deliver less than half of its agreed doses in the second quarter of the year.

Most of that reduction stems from supply issues, though evidence also points to single nations not deploying doses already available quickly enough.

The company and Catalent, one of its key European suppliers, have defended their manufacturing processes after the EMA said that, as part of its investigation, it was also probing possible manufacturing defects as a potential cause for the reported side effects.