Essay: For a gay country boy, Naomi Judd did build a bridge 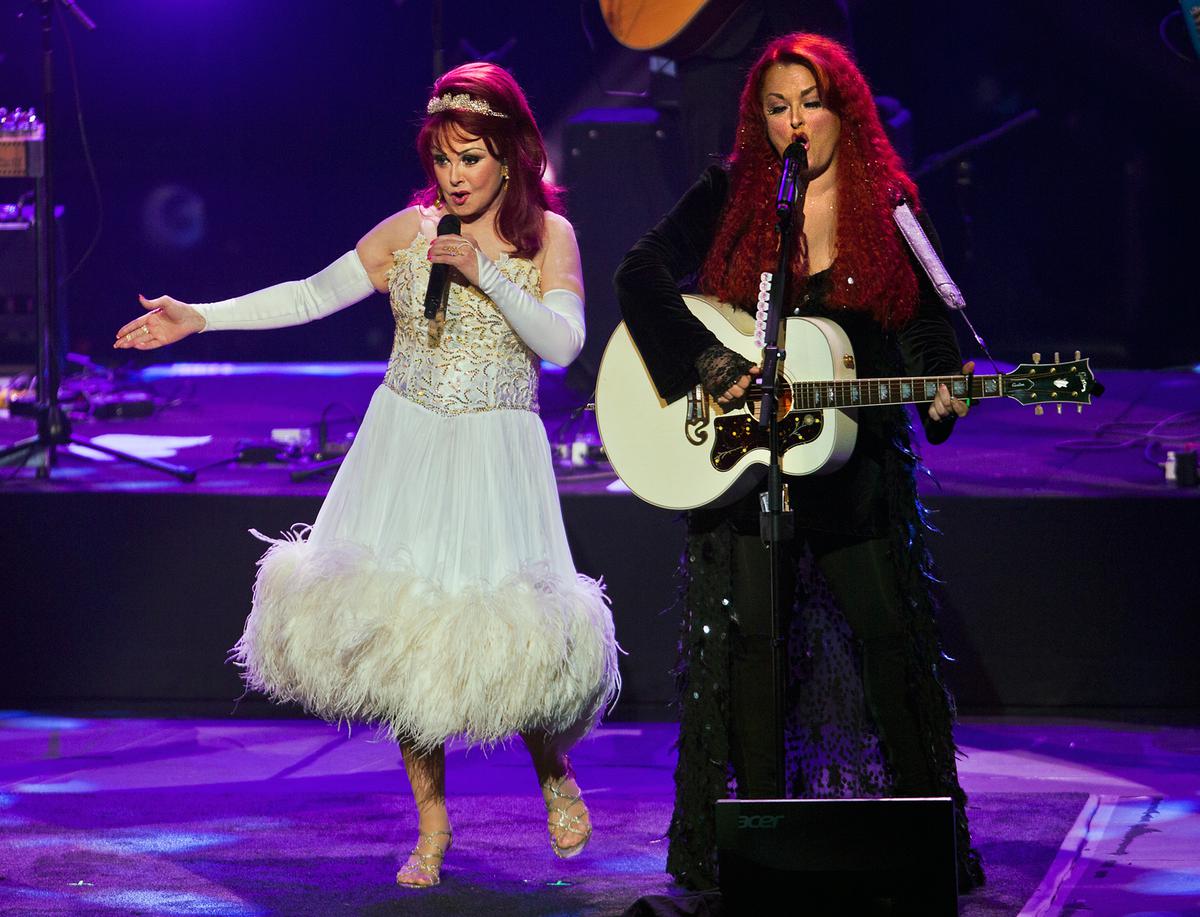 Naomi Judd and Wynonna Judd — The Judds — perform during opening night of “Girls Night Out,” their nine-show run, on Wednesday, Oct. 7, 2015, at the Venetian.

Somewhere in Michigan in the early 1990s, a teenage farm boy clings to a chain-link fence at the edge of the county fairgrounds. He is angling for a distant, and free, glimpse of Naomi and Wynonna Judd.

They step into view briefly, gliding on high heels to the edge of the grandstand stage. From this distance, illuminated by a spotlight, they are a blur of sparkling sequins and red hair. Naomi, the mother of the duo and the de facto emcee, says something, but even amplified, her words float away in the hot August night.

Soon, though, a gentle strumming and Wynonna’s throaty voice carry to him: “I would whisper love so loudly, every heart could understand that love and only love can join the tribes of man.”

I’m not sure what it was, but for me and for most people, the chemistry between Naomi and Wynonna and the feelings they stirred inside the listener were almost tangible. My first (and only) sighting of them is forever etched in my mind.

After word Saturday of Naomi’s death, I’m now realizing how much I’ve been through with them.

When I was a preteen beginning to reckon with my sexuality and dealing with bullies, and the Judds sang “Mama He’s Crazy,” I understood the narrator’s insecurities — why would anyone want me?

After my grandfather died, I listened to “Grandpa” over and over, crying that he would no longer be able to tell me about the good old days, which he actually used to do. (The song has since lost its luster for me a bit — the good old days weren’t really that good. But I still always think of my grandpa.)

And after my father died, I wanted to be at that breakfast table they sang about in “Love Is Alive,” soaking up all the love that sat there.

Those voices. That hair. Those gowns. For a lonely gay boy in the rural Midwest, they were a calling card, and a lifeline of sorts.

Wynonna was clearly the bigger voice of the duo. But without Naomi’s harmonies and stage presence, I doubt her daughter ever would have become the one-name star she is. And would Ashley have made it in Hollywood without her mother’s support?

As I grew older, the story of the Judds impressed me, and I saw bits of it in my own life. Naomi’s single motherhood, a nurse trying to score a recording contract, clicked with my view of my newly widowed mother, another country woman, trying to keep it together while still raising children.

If Naomi could do it, so could she. And so could I.

When cancer visited one of my leg bones after my senior year in high school, I thought of Naomi and her hepatitis diagnosis. Eventually she triumphed over it. So did I.

I went off to college, got married (well, committed — same-sex marriage wasn’t yet legal in those days) and ended up in New York. Like Naomi, I had persevered and made it out.

There, I cultivated a new circle of friends, many of them also from Michigan. One night a Judds song came on, I forget which one, and one of my new friends began singing along. It turned out we all loved the Judds. I had to go to all the way to New York City to find my country people.

Soon we two couples became inseparable, taking camping trips together several times a summer. When my husband and I moved to Philadelphia and they stayed in New York, we continued our campground reunions, and there was never a camping trip without a Judds singalong around the fire, under the starlit Pennsylvania sky.

Both couples have since divorced, and I have remarried — making sure to impress an appreciation of the Judds upon my new husband — but we all remain close and in touch. The lack of animosity between us reminds me of that line in “Love Can Build a Bridge,” perhaps Naomi’s crowning achievement as a songwriter: “Love and only love can join the tribes of man.”

I once sang that song at a piano bar, and a man in the audience approached me afterward, impressed by the song (probably not by my performance). It was so beautiful and artful, he thought it was a Broadway song. No, I said, just an old country song. He was shocked.

In this world, at this time, can love really join the tribes of man? It was not a question when the Judds asked, “Don’t you think it’s time?” Naomi knew the answer all along.

For 50 years, Roe has been wrong