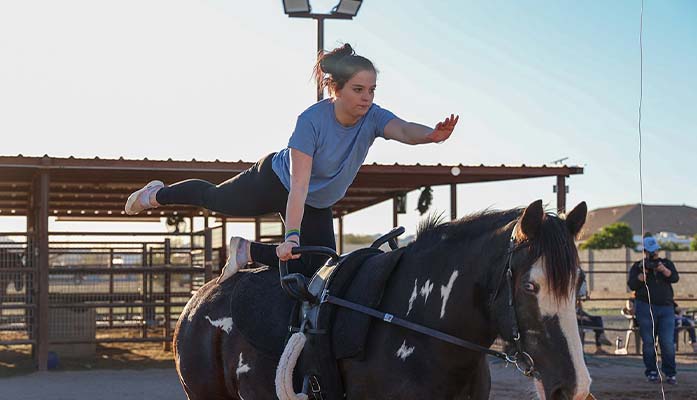 SAN TAN VALLEY – The first time Jarred Sallus tried equestrian vaulting, he was with his girlfriend, Kadriya Musina, in her native Russia. Within eight hours of his arrival, he was upside down on a horse.

Sallus returned to the stables the next day, ready to learn more about the sport. His excitement led to the couple in 2019 co-founding Salt River Vaulters, a non-profit organization that makes it possible for children or adults with disabilities to participate in equine therapy and therapeutic vaulting.

Sallus, whose early life struggles with behavioral issues saw him sent to boarding school in Sedona, soon found that horses were an avenue that could lead toward a peaceful, more tranquil life. Following boarding school, Sallus moved back to California, starting his journey with Luna, a horse that is now used at Salt River Vaulters. 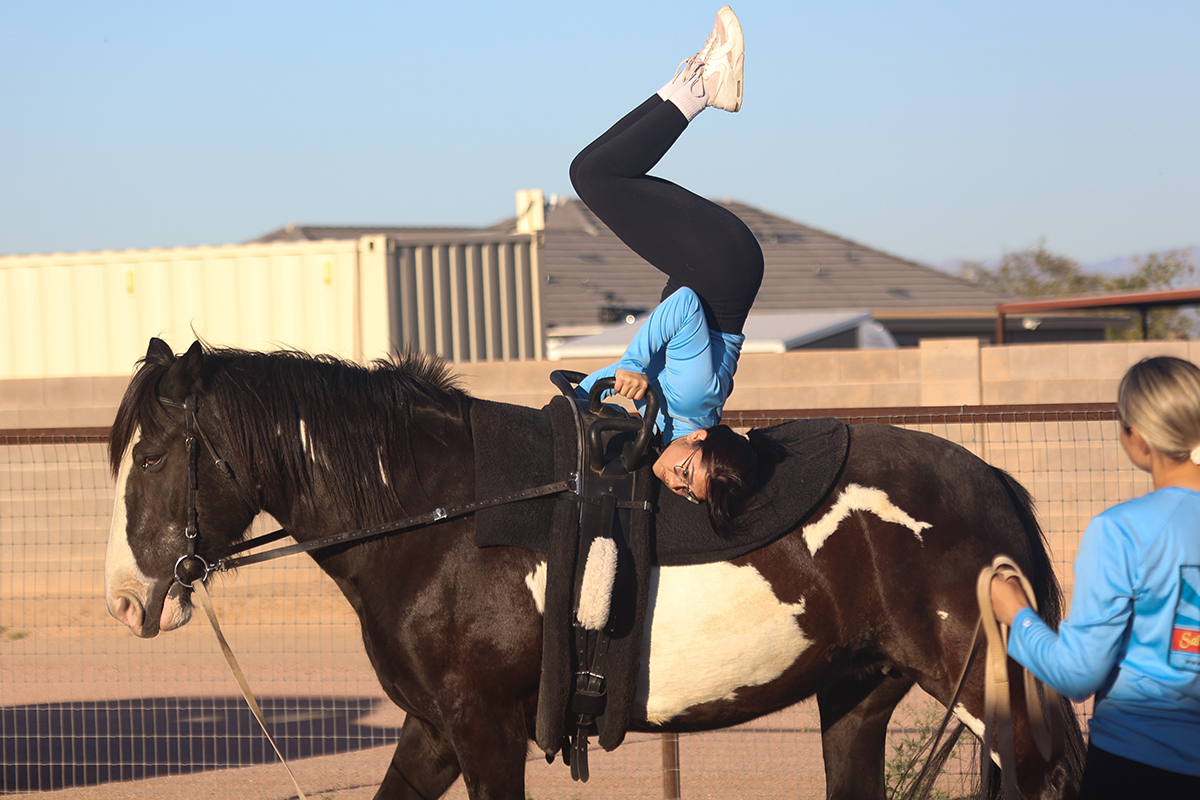 Equestrian vaulting is “essentially gymnastics on horseback,” Sallus said, and competition includes compulsories and freestyle options. Salt River Vaulters start their beginners with compulsory exercises including vault-on, flag, stand and flank, moves that can help the athletes’ physical and mental growth. Pas de Deux features two people on a horse, and also includes aspects of gymnastics in the routine.

Athletes can participate in competition as an individual or with a team, and are scored on their flexibility and balance, as well as covering all areas of the horse. The horse is judged on its gait and quality, and each athlete must face on all four sides of the horse.

The United States held its first equestrian vaulting competition in 1969, according to US Equestrian, although the sport did not reach Arizona until Salt River Vaulters. When the couple returned from Russia, Sallus said he felt a void, realizing “there’s nothing here.”

After searching for a comfortable and safe area for the vaulters, Musina and Sallus, now married, found running their non-profit organization from their backyard in San Tan Valley was best, which also allowed them to expand the amount of classes.

“I love helping the kids with disabilities. I think it’s probably my favorite thing,” Sallus said. “They just have a joy with them that they bring to lessons, and just their smile.”

It’s not about making money, and it’s more than a business, Musina-Sallus said. “It’s about changing the lives of kids and adults and people in general because horses are changing lives,” she said. 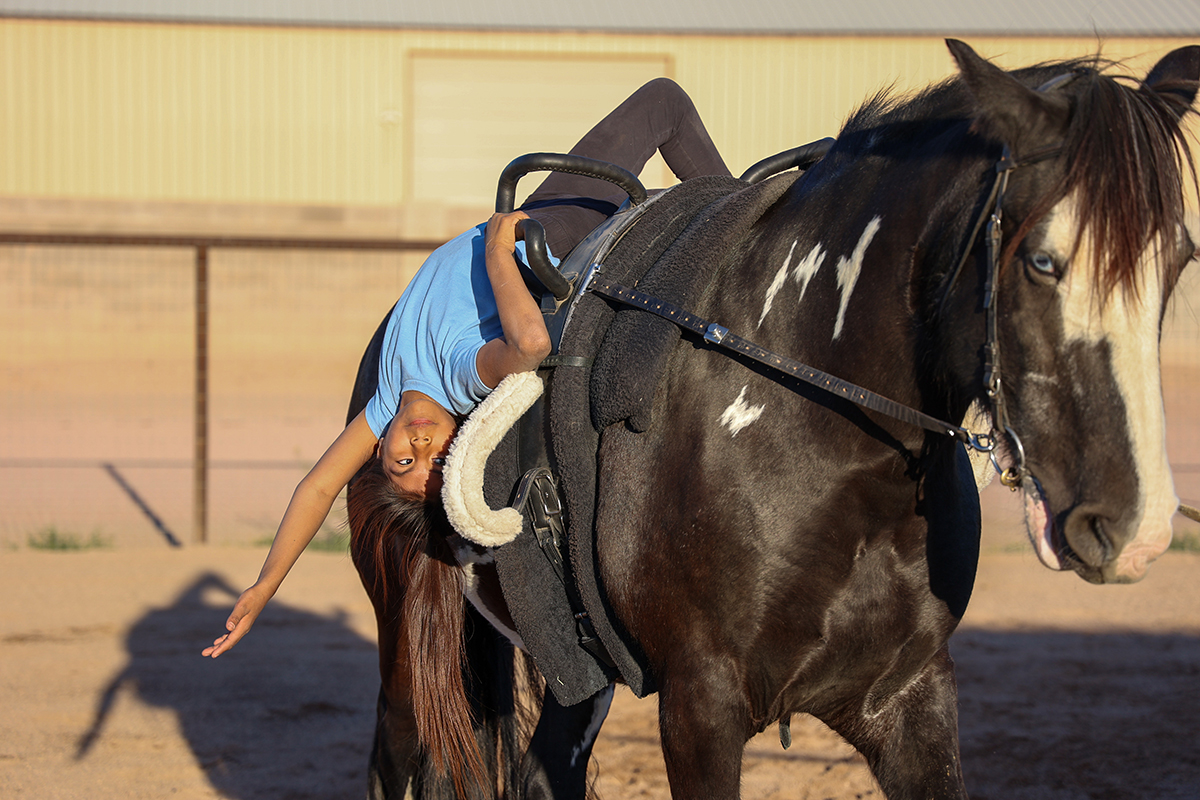 The goal of Salt River Vaulters is to help students branch out of their comfort zone and strengthen their mental and physical state. Musina-Sallus believes students stop doubting themselves, and overcome their fears, once they start equestrian vaulting. (Photo by Mary Grace Grabill/Cronkite News) 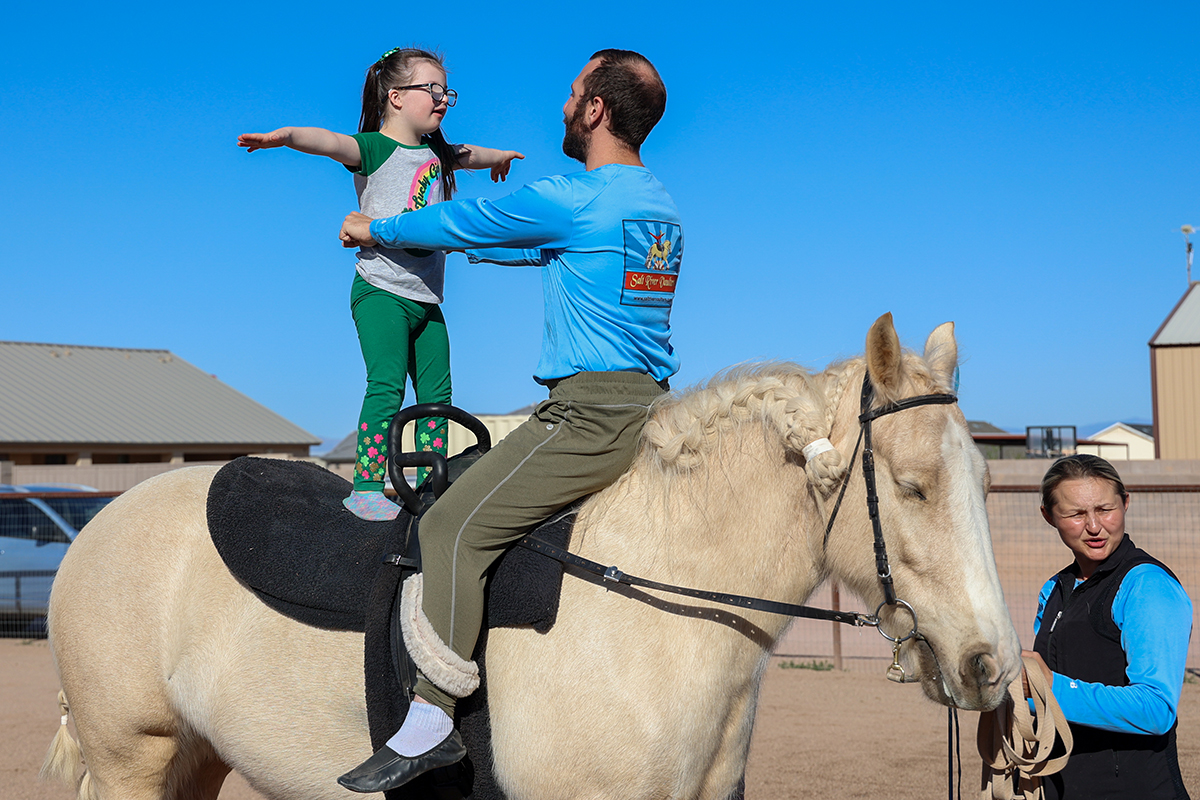 Jarred Sallus saw horseback riding as an outlet for his behavioral problems while growing up.. Now he helps children with disabilities comes out of their shells while vaulting. (Photo by Mary Grace Grabill/Cronkite News) 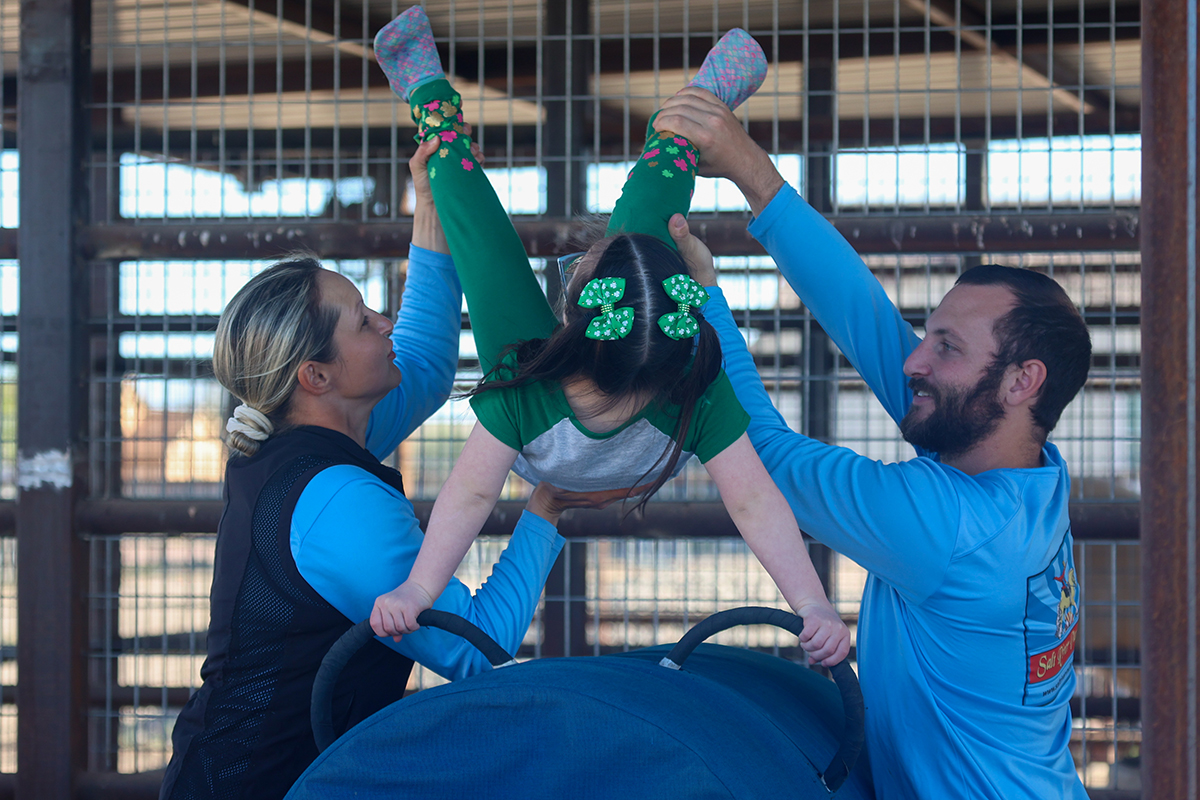 Jarred Sallus and Kadriya Musina-Sallus want to show how a horse can change a person’s life through equestrian vaulting. They have impacted many and continue to grow their vaulting club for all. (Photo by Mary Grace Grabill/Cronkite News) 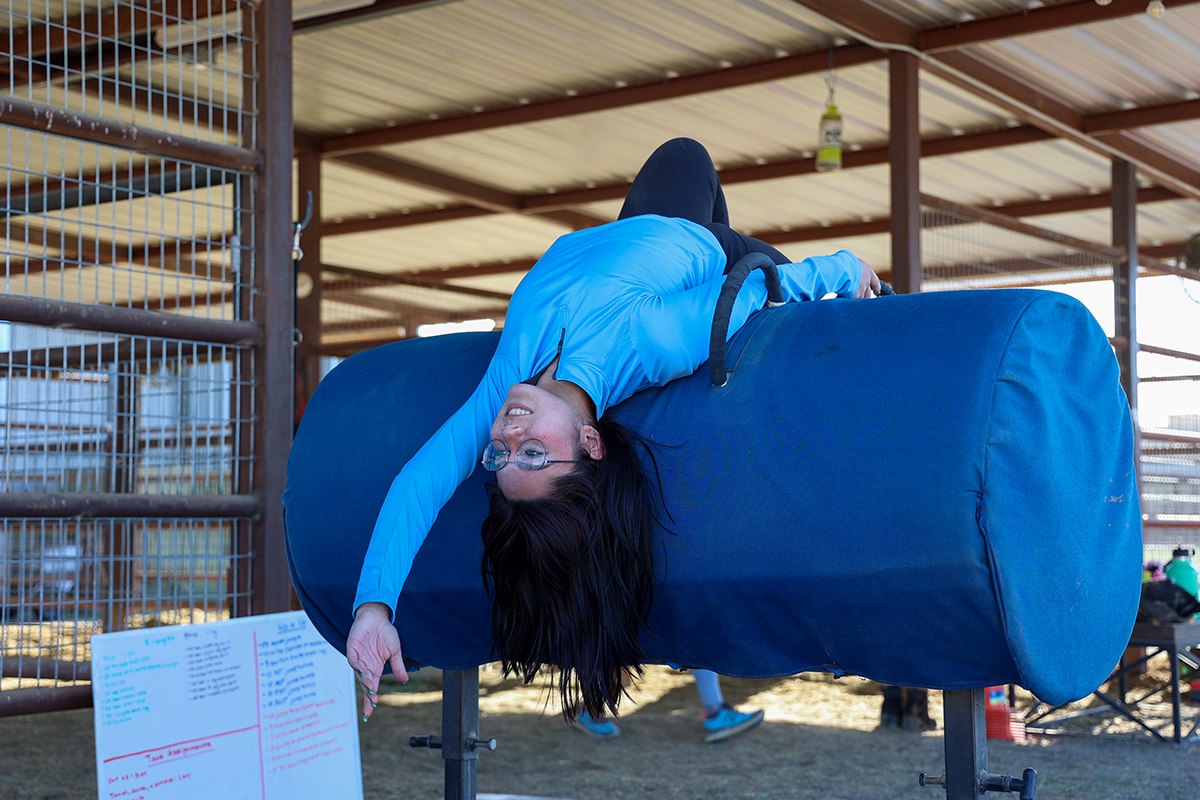 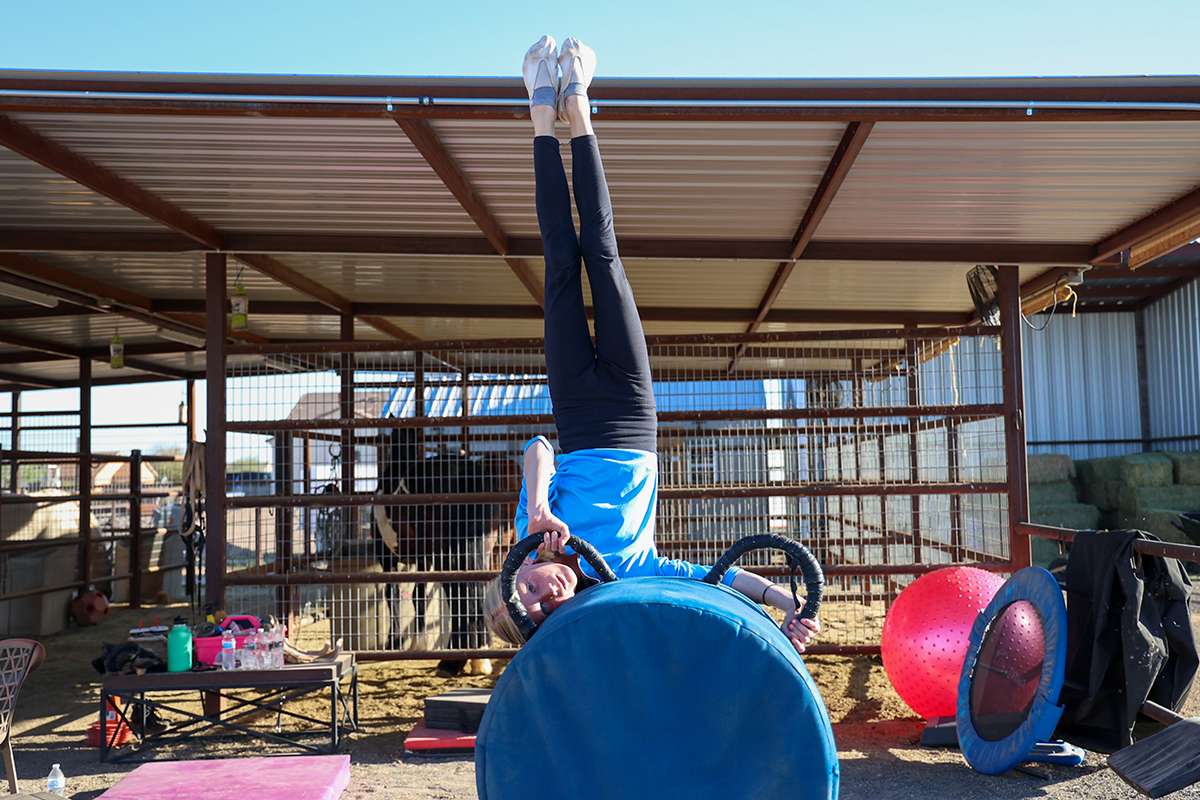 Before executing moves on the horse, students of Salt River Vaulters must perfect the skill on the vaulting barrel, allowing them to then safely execute the compulsory exercise on the horse. (Photo by Mary Grace Grabill/Cronkite News) 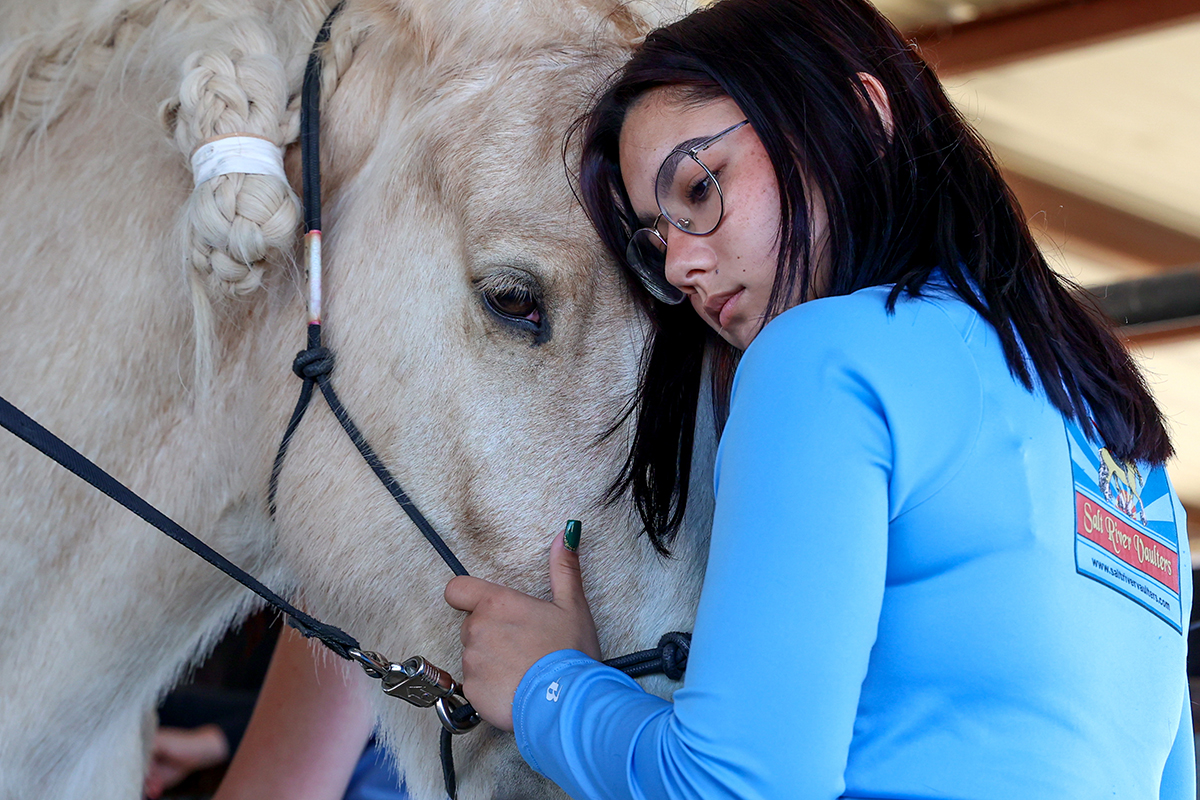 Jocelyn Kronick hopes to be a part of Salt River Vaulters as they continue to grow their non-profit organization, impacting the lives of children who have disabilities. (Photo by Mary Grace Grabill/Cronkite News)

Allyson Ward, 16, has sensory processing disorder and autism, which makes attending school, dressing herself and finding the motivation to get through the day difficult. But two months ago, Ward’s life gained purpose when she discovered Salt River Vaulters.

Building a powerful connection with horses has enabled Allyson to emerge from her shell.

She has also developed a strong connection with Musina-Sallus and the horses.

“Me and my coach have become really close,” she said. “And then I’m really close with the horse Jewel. She’s my favorite.”

“The main reason is to help people in general with disabilities and able-bodies to have experience, to know what a horse vaulting and therapy and communication is with the horse,” Musina-Sallus said. “In general, how horse can affect your life and help you because it’s a whole another energy that comes from the horse. And it kind of changes you.”