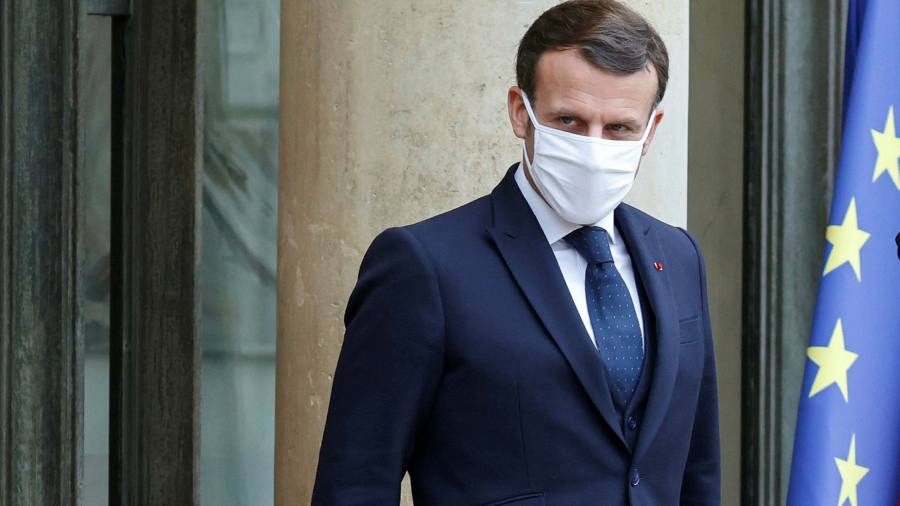 It was an uncharacteristically fretful and tired-looking Emmanuel Macron who last week cast doubt on the effectiveness for the elderly of the Oxford/AstraZeneca coronavirus vaccine and remarked that the UK’s successful inoculation campaign would not change its “total” dependence on road freight from the EU.

At the time of his comments at the Elysée last Friday — he said the vaccine appeared “almost ineffective for those over 65” when in fact there was not enough data to judge either way — the French president was poised to make a decision that may prove fateful for his political future on whether to impose the country’s third nationwide lockdown.

However, evident disagreements between French ministers and health officials over how to tackle the year-old coronavirus crisis — and the slow rollout of vaccinations in France and the rest of the EU compared with the pace set in the UK and US — have raised questions about Macron’s chances of re-election in next year’s presidential poll.

A Harris Interactive opinion poll published last week showed Macron had lost ground to Marine Le Pen of the far-right Rassemblement National, his main rival, polling 23-24 per cent against her 26-27 per cent in voting intentions for the first round in April next year.

A more incendiary finding, leaked to the French media but not published by Harris, showed that in a hypothetical contest between the two in the second and final round, Macron was set to beat Le Pen by only 4 percentage points at 52-48, compared with his convincing 66-34 victory in the 2017 election.

Other polls, however, are less dramatic, with a new Ipsos poll giving Macron a 12-point lead in the second round, and political commentators are cautious about drawing too many conclusions about election outcomes more than a year ahead of the vote — even if they criticise Macron’s performance.

“Is there even a [French Covid] strategy?” asked Virginie Martin, a political analyst at Kedge Business School, pointing out that France was ranked 73 out of 98 countries in the Lowy Institute’s Covid Performance index based on the number of cases, deaths and tests. “We have the impression of being always reactive, of being half a step behind.”

Martin said almost half of France was angry with Macron’s government and the situation, but added that this polarisation of society had not translated into a common front against the president because people were angry about different and sometimes contradictory things.

Many do not want vaccines at all, while others complain France is vaccinating too slowly (just over two doses per hundred people so far, compared with five in Denmark and 15 in the UK). Some reject lockdowns and masks as infringements on their liberty, while others want the government to be stricter; and some believe the whole pandemic is a plot.

Nobody really knows what should be done or shouldn’t be done . . . Covid has acted as a way of freezing the political landscape

“Radical positions going from the extreme left to the extreme right are not always along the same lines,” said Martin. “He [Macron] is winning it — not well, and the situation is bad — but he’s not losing.”

Other analysts, supported by several recent opinion polls, agreed that opposition parties were also not having a “good” coronavirus crisis, especially the Socialist party and the centre-right Les Républicains whose voters were lured en masse by Macron’s “neither right, nor left” campaign four years ago. Party leaders were struggling to gain traction for next year’s election when so much news coverage and public debate remained focused on the pandemic.

“People say no one would necessarily do better than Macron — or worse,” said Chloé Morin, an analyst at Fondation Jean-Jaurès think-tank. “Nobody really knows what should be done or shouldn’t be done . . . Covid has acted as a way of freezing the political landscape.”

For Vincent Martigny, politics professor at the University of Nice, the issues are not just about the administration’s performance and popularity during the pandemic but also about the increasingly prominent role of French presidents in day-to-day decision-making since the days of Nicolas Sarkozy.

“I don’t think Macron is damaged politically so far, at least no more than he was before. But this ‘hyper-presidency’ is not a good way to deal with pandemics,” said Martigny.

“Nowadays one has the feeling that everything derives from the president . . . It’s good when you have to take quick decisions in the short term, but not when the pandemic lasts more than a year and people are starting to get tired and angry.”

Morin made a similar analysis, finding it an “extraordinary” comment on the state of French democracy that Macron was portrayed by his officials as courageously taking the crucial decisions about the pandemic on his own.

Macron, meanwhile, shows no sign of slowing down despite his own bout of Covid-19 in December. On Tuesday night, he appeared in a surprise TF1 television interview to defend the EU’s cautious vaccination policy and promise that all French adults who wanted would be inoculated “by the end of the summer”.

If that promise is fulfilled, it would not only save lives but might tilt the political balance in his favour again in time for 2022.