Embrace Thanksgiving by learning about issues faced by Natives 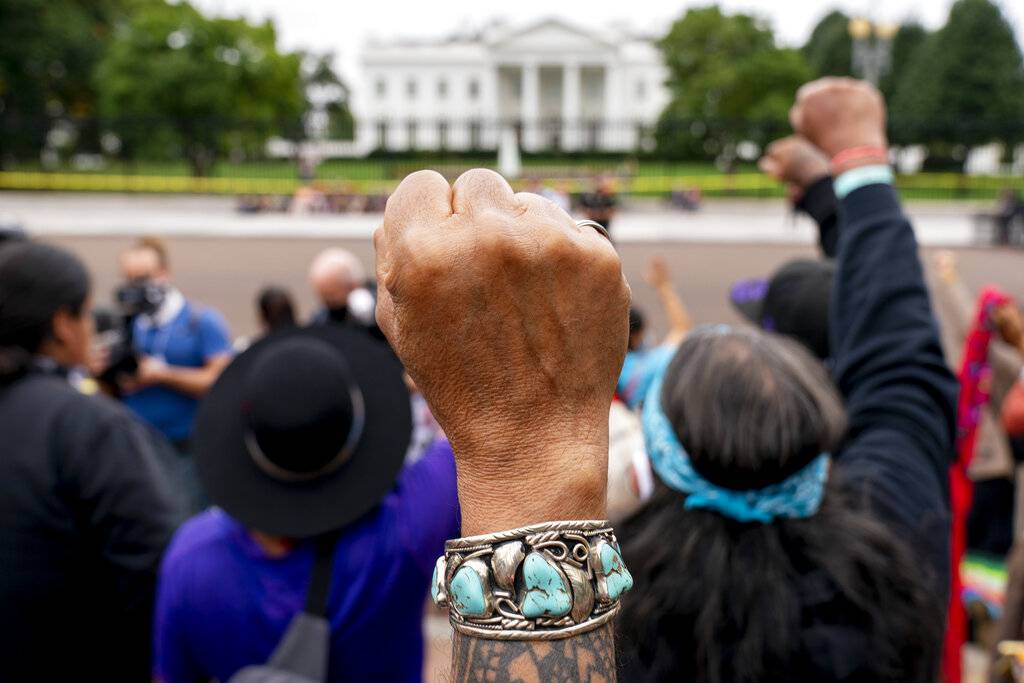 Wolf Ramerez of Houston, center, joins others with the Carrizo Comecrudo Tribe of Texas in holding up his fists as Indigenous and environmental activists protest in front of the White House in Washington, Oct. 11, 2021. President Joe Biden has announced steps to improve public safety and justice for Native Americans.

Myths and legends have always fascinated the human mind. We search for answers to the unexplained, for greater design or purpose in the everyday mundane and for our role in a story that is bigger than our individual lives.

Like the great epics of literature, myths and legends are important to our society — not because they’re true, but because they speak to our ambitions, aspirations and desires. They speak to who we want to be more than about who we actually are.

The myth of Thanksgiving is no different. Yes, the story of the Pilgrims and the first Thanksgiving at Plymouth Rock has dubious origins that conceal violence and genocide. And yes, we should all take the time to learn the truth and facts behind that myth. But the myth of Thanksgiving doesn’t simply exist in the past. Like most stories, it has continuously evolved to suit the needs of different generations and it’s still evolving today.

In this way, Thanksgiving invites us to learn more about the Indigenous people of the Americas right now, at a time that is critical to their survival as a sovereign people and culture. It also invites us to reflect on whether the legacy of the United States will be exclusively as conqueror and abuser or whether we will live up to our ideals by embracing a more just, peaceful and unified path forward.

This weekend, we invite you to embrace the role of pilgrim in the myth of mutual understanding suggested by Thanksgiving, and take time to learn about issues of importance to Native American people.

Right now, in the United States, Indigenous people are at a critical juncture in their long struggle to preserve their legal rights and cultural identity. Numerous court cases in the coming year will determine everything from tribal land holdings and water rights to the authority of tribal courts in bankruptcy and child custody cases. One case even takes up the question of the legal sovereignty of Indigenous nations.

Simultaneously, tribal leaders are seeking to enforce treaties long ignored by the U.S. government and to gain greater authority and autonomy over tribal resources and land holdings. A 2016 article in The Atlantic described the challenge of current tribal land as “dead capital”: “They (tribes) may possess a certain amount of land on paper, but they can’t put it to use by selling it, buying more to take advantage of economies of scale, or borrowing against it.”

The result is that tribal communities face higher levels of poverty, less funding and access to education and health care, and a lower life expectancy. Even common illnesses like influenza are nearly twice as likely to result in the death of an Indigenous person as opposed to their white counterparts.

Perhaps worst of all, there is an ongoing crisis of missing and murdered Indigenous women. According to the Coalition to Stop Violence Against Native Women, American Indian women are 10 times more likely to be murdered than non-Native women. They’re also far more likely to be abducted and sold into the sex trade.

These are just a sampling of the many important issues facing indigenous communities today. And many of these issues have a direct impact on non-tribal communities as well. Poverty, crime, the inability to access education or health care, and the future of land and water rights all have direct impacts on non-Indigenous people and thus are worth investing time to learn about and understand.

Fortunately, learning is easier than ever. While the best sources of detailed and nuanced information are still books and articles, as tribes increase their efforts to reclaim their legal rights and cultural identity, Native stories are also becoming increasingly popular in film and television.

“Reservation Dogs,” “Dark Wind,” “Alaska Daily,” “Prey” and “Rutherford Falls” are making their mark on the industry by offering complex and nuanced Indigenous characters and storylines. Gone are the days of white people playing stereotypical Native characters whose only possible attributes are as either a warlike savage or a “magical Indian.”

And in many cases, it’s Native voices — writers, directors and actors — who are telling these stories, giving you the viewer an opportunity to engage in the lives and histories of Indigenous people in an entirely new way.

Thanksgiving is upon us, so let’s be like the pilgrims of our Thanksgiving myth and take time this long weekend to learn about the issues that confront modern Indigenous Americans. Learning about contemporary Native American reality is a noble way of recognizing this holiday.

If you encounter something interesting or gain a new insight, send a letter to the editor so we can share it with other readers after the holiday. After all, Thanksgiving is about coming together.