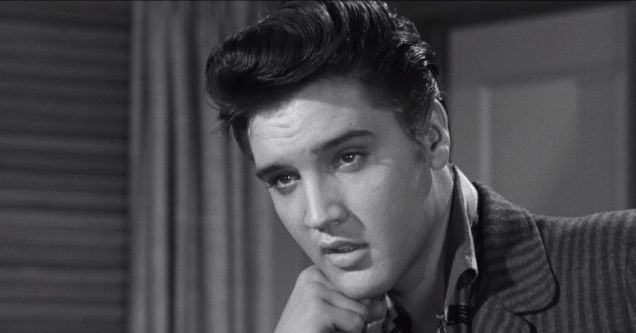 It’s true — Elvis Presley is back in the building. Thanks to the outrageous cinematic glamour of Baz Luhrmann, the King is returning front and center to the public eye. With Austin Butler embodying the legendary rock star’s hip-shaking spirit, Elvis turns the tables on his often fraught relationship with morally scant manager Col. Tom Parker (Tom Hanks).

While viewers are in for a rhinestoned treat of classic bangers, cowlicks, and girls throwing their bras on stage, Elvis’ film career makes up a huge part of the film’s narrative. Setting his sights on the likes of James Dean, the king of rock ’n’ roll’s ultimate dream was to become a full-fledged movie star. After being shipped off to the army in order to fix his unsavory “Elvis the Pelvis” image, the drastic identity switch-up seemed actually possible for a guy who always made the world his own.

In a lot of ways, his dream came true. With at least 31 feature films under his belt, Elvis became the cash cow of the silver screen, quickly billed as one of Hollywood’s highest-paid actors. To many people, his film career was a complete failure. A domino chain effect started in the fall of 1960, with mixed reviews and box office disappointments leading to the King being branded as “kind of a joke” and far from a serious actor. Presley didn’t even like most of his work, with reports claiming he’d neither watch nor pay to see his films. Even so, the majority of his fan base loved his movies as much as his music, with notable titles that undoubtedly became cult classics.

While Elvis takes us through a whistle-stop tour of the King’s time on screen, here are his best movies to watch at home before you go.

We’ve all sung the song countless times, but the synonymous movie has a life all its own. Starring as musically gifted race driver Lucky Jackson, Presley sets out to win the affections of sexy swim instructor Rusty (Ann-Margret) while competing in a Vegas Grand Prix race. Sounds trite and predictable, but Elvis’ 15th film is one of his best. Grossing over $9 million at the box office, the American Film Institute nominated Viva Las Vegas in 2006 as one of the greatest movie musicals of all time. Beloved for its killer hot-moves dance scene and catchy tunes such as “C’mon Everybody” and “What’d I Say,” Elvis and Ann-Margret were praised for their sizzling chemistry by critics and fans alike. To fresh eyes, the film might seem like a mix between Grease and West Side Story, and that’s for good reason — original West Side Story cast member David Winters was the chief choreographer. Elvis is in top form with classic Hollywood showmanship, while equally as dashing in grubby coveralls and tinkering with a car’s engine. Thanks to the fun-loving poolside number “The Lady Loves Me,” there’s a sense of hot girl summer before we even knew what it was.

Viva Las Vegas is available for rent or purchase digitally at Amazon, Apple, Google Play, and other VOD vendors.

Only the best musical numbers stand the test of time, and the iconic prison cell jaunt in Jailhouse Rock is one of them. Following the story of construction worker Vince Everett, his arrest for manslaughter changes his life when he learns the guitar while incarcerated. There’s a heady romanticism in its black-and-white lens. The use of profanity and bad boy character didn’t exactly win over a 1950s audience, yet it still managed to bag a few awards. With a fiery connection with on-screen love Peggy (Judy Tyler), there’s no doubting one thing — Presley is a total badass. Maybe he was subtly flipping the bird to the claws dug in by MGM’s head honchos. Maybe he just got really method. Whatever it was, there’s a lot more packed in than meets the eye, and it’s in stark contrast to much of his later work.

Jailhouse Rock is available for rent or purchase digitally at Amazon, Apple, Google Play, and other VOD vendors.

Presley’s eighth film saw him hopping over to the islands of Hawaii, fresh from the army’s clutches into the arms of his girlfriend (this time played by Joan Blackman). The stakes are relatively low, but there’s a smooth seductive charm held in Presley’s dulcet tones and the big blue sea. Referred to as “harmless” by New York Times critic Howard Thompson, Elvis proves that sometimes a face-value story is just what you need. Blue Hawaii has a lot to lust over, with an idyllic setting to die for, smoldering soldier charm, and 14 peppy tracks that tide the 102-minute run time over. Keep an extra eye out for a young Angela Lansbury as Presley’s mother (who saw that coming?).

Blue Hawaii is available for rent or purchase digitally at Amazon, Apple, Google Play, and other VOD vendors.

Voted by Variety as Presley’s best film of all time, King Creole tells the story of a teenage dropout who winds up as a singer. The movie is arguably where Elvis comes closest to living out his Marlon Brando dreams, spearheaded by director Michael Curtiz, who had previously worked with Humphrey Bogart and Errol Flynn. Once again living up to his no-good status, it’s here audiences see the slinky yet stern performance of hit single “Trouble.” While still maintaining expected romantic entanglements with a leading lady (Carolyn Jones), it’s the most notable instance of Elvis shifting to the darker side. Through a moody black-and-white picture, Presley’s Danny Fisher deals with crooks and gangs, facing off with henchmen in dark alleys. Set in Mexico, King Creole was a pivotal moment in the King’s rocky relationship with the country. It’s not hard to see why teens literally busted down the doors of local cinemas to watch.

King Creole is available to watch for free with a library card on Hoopla, and is available for rent or purchase digitally at Amazon, Apple, Google Play, and other VOD vendors.

Screen testing for Love Me Tender only a few weeks after his breakout hit “Heartbreak Hotel,” it’s here that Presley’s wayward journey to cinema stardom began. Elvis’ debut transforms him into Clint Reno, a young man whose brothers all fought for the Confederate Army in the Civil War. While not the sexiest in subject matter, performances of the title song help the King to find his acting chops. Elvis originally screen tested for the producers of Casablanca, and had believed to be starring opposite Katharine Hepburn in The Rainmaker. Paramount Studios switched his projects and signed him to a contract a week later. You only need to watch Baz Luhrmann’s Elvis epic to see how that turned out.

Love Me Tender is available to watch on Starz, and is available for rent or purchase digitally at Amazon, Apple, and other VOD vendors.

In his penultimate year of filmmaking, it was time to pull out the big guns. Heading back to the racetrack as NASCAR champ Steve Grayson, Elvis’ back taxes get him into trouble with the IRS. It’s a rather unglamorous segue but comes good in swinging ’60s numbers and a soundtrack of 12 fresh hits. No longer relying on the unsung Hollywood starlet to pander to his golden credentials, Presley stars opposite the queen of pop, Nancy Sinatra. Originally supposed to star Sonny & Cher, Speedway was a box-office success, providing a backdrop of nail-biting races, door punches, and well-deserved slaps.

Speedway is available for rent or purchase digitally at Amazon, Apple, and other VOD vendors.

It Happened at the World’s Fair

One of Presley’s movies mentioned in the mind-boggling montage of Elvis, “Elvis the Pelvis” once again makes a return. Taking place at the 1962 Seattle World Fair, romance is in the air for crop-dusting pilot Mike Edwards and nurse Diane Warren (Joan O’Brien). A visual mashup of North by Northwest and Bedknobs and Broomsticks, the movie has a fantastical sense of whimsy, harking back to the musicals of old. The film serves as Kurt Russell’s film debut, while more interestingly, Vicky Tiu — who went on to be the first lady of Hawaii — also features.

It Happened at the World’s Fair is available for rent or purchase digitally at Amazon, Apple, and other VOD vendors.

The Trouble with Girls

Rounding out Elvis’ 13-year acting career, The Trouble with Girls shows an Elvis Presley who’s over it. Integral to understanding the context of Baz Luhrmann’s Elvis, Trouble follows Walter Hale, who’s embroiled in scandal following the murder of a local pharmacist. MGM is clearly trying to raise the stakes in a type of drama that’s no longer working, and a leading man that’s lost his passion. A charming comedy nonetheless, it performed well on the cinema drive-in circuit, though the same can’t be said for cinemas. Period dramedies are always a good time, and The Trouble with Girls is likely the only example of Elvis playing an un-Elvis role.

The Trouble with Girls is available for rent or purchase digitally at Amazon, Apple, and other VOD vendors.

Art often imitates life, and G.I. Blues is no exception. Presley plays Tulsa McLean, a soldier returning home after being stationed in Germany — exactly like Elvis himself. A shining example of all-American family values, the film has every possible U.S. stereotype wrapped up and packaged with a guitar to match. His fifth movie, G.I. Blues is widely considered the beginning of the commercial film formula Elvis was molded into. Still, he can’t go wrong with an absolutely classic romance, even serenading a Punch and Judy puppet for good measure.

The Trouble with Girls is available for rent or purchase digitally at Amazon, Apple, and other VOD vendors.

Aloha from Hawaii via Satellite

Amidst the Las Vegas residency years, Elvis was reluctantly able to tour the nation. One of his most famous televised concerts was Aloha from Hawaii, in which he sports the sideburns and jumpsuits he came to be known for a few years before his death. Watched by 1.5 billion people in over 36 countries, it marked the first time satellite technology was used to broadcast a live concert globally. Rising to the occasion, the King effortlessly lived up to his reputation, adorned in a lei and gyrating his hips to legions of thrilled fans. The filming itself is an astounding feat, providing an artistic take on multiple perspectives of the Presley power. Whether you love him or hate him, Aloha from Hawaii makes for an emotional watch that’s packed with pride.

Aloha from Hawaii via Satellite is available to watch on YouTube.

A weekly roundup of the best things from Polygon