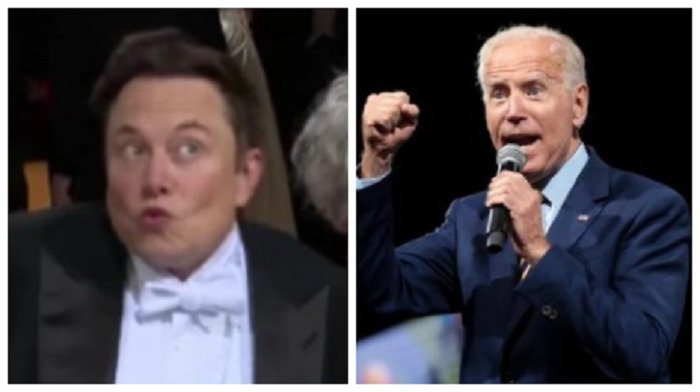 Elon Musk heavily criticized Joe Biden Monday, saying the person controlling his teleprompter is the “real President” and suggesting inflation under the current administration is going to lead to America resembling Venezuela.

Musk made the comments on a podcast recorded during the All-In Summit being hosted in Miami.

“It’s hard to tell what Biden is doing to be totally frank,” the Tesla CEO asserted.

He compared the President to Will Ferrell’s Anchorman character, Ron Burgundy, a news anchor who reads anything written on the teleprompter, regardless of how it affects his career.

While the comments were made half in jest, Elon Musk’s comparison of President Biden to Anchorman may just be onto something.

In a speech paying tribute to Bob Dole in December 2021, Biden read aloud from his notes, “End of message.”

Biden Reads “End of Message” Off of His Notes During Bob Dole Eulogy pic.twitter.com/JQLBIF2xyP

Reports also surfaced indicating the teleprompter wields enormous power in the White House. Or rather, the fake White House.

Aides to President Biden prefer he use a fake White House stage for events rather than the Oval Office because it can be equipped with an easily read permanent teleprompter.

STICK TO THE SCRIPT: It appears there’s a reason behind the ‘fake White House stage’ built next door. https://t.co/KIzWMpuOpk pic.twitter.com/FAYwwGMuMA

Much to the horror of liberals everywhere, Elon Musk continued to shred Biden saying that by comparison to the Trump administration, the current President doesn’t get a whole lot done.

No need to leave Trump aside, Mr. Musk. Considering a good portion of his administration was actively working against him, President Trump accomplished quite a bit.

The tech mogul pointed the finger at the government’s out-of-control spending, saying “the obvious reason for inflation is that the government printed a zillion amount of more money than it had.”

“If the government could just issue massive amounts of money and deficits didn’t matter, then, well, why don’t we just make the deficit 100 times bigger?” he asked. “The answer is, you can’t because it will basically turn the dollar into something that is worthless.”

“Various countries have tried this experiment multiple times. Have you seen Venezuela?” he continued. “Like the poor, poor people of Venezuela are, you know, have been just run roughshod by their government.”

Tesla CEO Elon Musk is sharply criticizing President Biden’s stewardship of the economy and warning that if prices skyrocket any higher, the U.S. could end up like Venezuela. https://t.co/XfpFguQgoa

With empty shelves having plagued grocery stores in America over the past year and a new crisis involving a lack of adequate baby formula for parents of infants, Biden is well on his way to making this country resemble Venezuela.

This is beyond frustrating. While shelves here at home are empty, pallets of formula make their way to the border courtesy of the U.S. government. https://t.co/0DyFRcDDZd

Despite having voted “overwhelmingly for Democrats” by his own admission, Musk has been a frequent critic of President Biden.

Earlier this year, he taunted Biden for failing to mention Tesla’s investment in electric vehicle production during the State of the Union address, fact-checking him in real-time.

In doing so, Musk once again asserted there is somebody behind the President controlling the puppet strings.

“Tesla has created over 50,000 US jobs building electric vehicles & is investing more than double GM + Ford combined,” he said adding, “FYI to (the) person controlling this twitter.”

Criticism of the way the Biden administration has handled his electric vehicle company has been a theme, with Musk also saying the administration is “not the friendliest” to Tesla when it comes to promoting their investments in electric cars in the United States.

“Biden has pointedly ignored Tesla at every turn and falsely stated to the public that GM leads the electric car industry,” Musk told CNBC.

The feud between @elonmusk and @POTUS isn’t about Elon getting recognition. It’s about the 90,000+ employees and thousands more contractors who are getting snubbed by the president. Elon is defending his employees who are some of the best talent the country has!

Musk’s acquisition of Twitter remains ongoing and he said he is “still committed” to the purchase of the social media company. It is currently on hold pending details about spam and fake accounts on the platform.