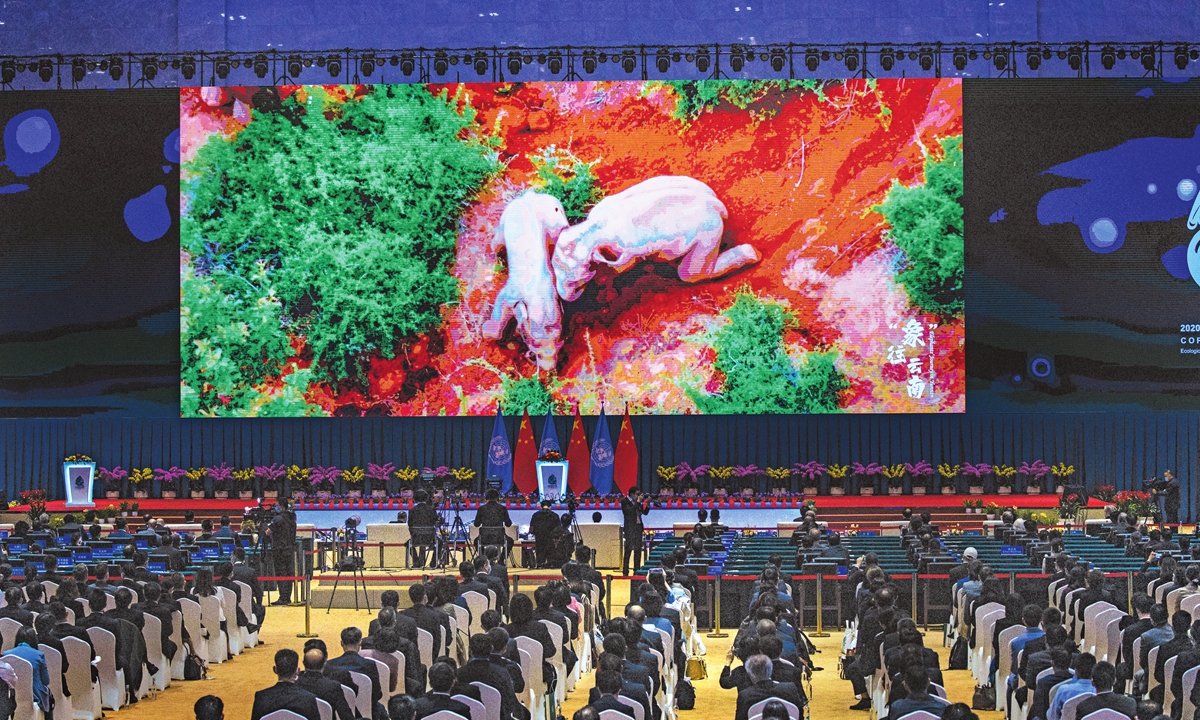 A video on the activities of a herd of wild Asian elephants that went astray in Southwest China’s Yunnan Province in September is shown on a big screen at the 15th meeting of the Conference of the Parties to the UN Convention on Biological Diversity (COP15), in Kunming, capital of Yunnan Province, on Monday.  Photo: Li Hao/GT The elephants take a nap during their trip in Southwest China’s Yunnan Province. Photo: courtesy of Yunnan forest fire brigade 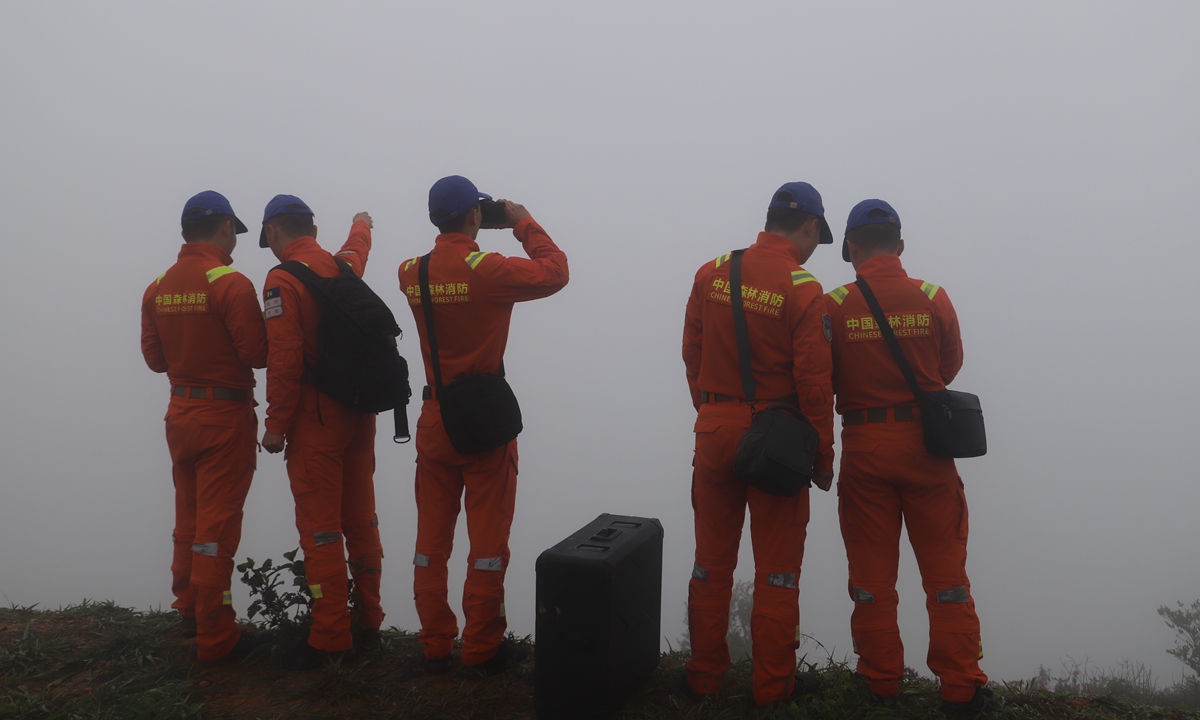 During the 15th meeting of the Conference of the Parties to the Convention on Biological Diversity (COP15) in Kunming, Southwest China’s Yunnan Province, the herd of wild Asian elephants that had been on an exodus once again becomes the center of attention, with those sharing their journey recounting details and international delegates praising China for its proper handling of the matter.

Earlier in August, the famous herd left and wandered more than 500 kilometers in Yunnan, and finally crossed the Yuanjiang River in preparation for their trip back home. Over the course of their 17-month odyssey, they became the focus of the world’s attention due to their carefree appearance while roaming in the wild, and because it reflected the progress China has made in its wildlife conservation efforts.

Another group that has gained global attention with this herd are the “elephant runners,” who accompanied the elephants on their journey of hundreds of kilometers, observing and recording them, and ultimately helping them return home. At the COP15 meeting, they revealed to the Global Times the behind-the-scenes details of their own story. “Being treated with snacks like bananas and corn, they gained more weight compared to the time we first met,” Yang Xiangyu, head of the elephant monitoring team, told the Global Times on Thursday in Kunming during the ongoing COP15 meeting.

Yang and nine other members started to track and monitor the herd of wandering elephants when they marched toward the city center in Eshan county late May, almost 400 kilometers north of the nature reserve they left over a year earlier.

As a forest fire fighter in Yunnan, Yang had never seen an elephant or done any work related to tracking elephant herds before that.

Yang said that drones used to track wildfires are now being widely applied to track elephants, which they used to warn local governments and villagers about their trail and help guide them toward safer routes.

“I used to worry about losing sight of these naughty giant creatures when changing the drones’ batteries. They can run at a rather high speed of two to three kilometers per hour, even in mountainous areas,” Yang said, “Give them 10 minutes and they can escape from the tracking of drones.”

“So we had to drive closely to follow them,” recalled Yang, whose team changed observation spots 13 times one night in order to catch up with the herd after it had run over 30 kilometers.

Based on the trails that Yang’s team recorded, local authorities have formed a task force and mobilized hundreds of people to escort the elephants and keep them away from more densely populated villages and town centers.

During their “odyssey,” millions of Chinese and even international viewers tuned in to watch the adventurous journey on television and on live-streaming sites and even tracked their real-time movements on social platforms, turning the giant creatures into an online sensation.

So is the monitoring team member, Zhang Xiong, who gained fame through an aerial photo taken with the drone. The heart-warming image captured a touching moment when the elephants lay down to take a nap in a forest, with the older members forming a circle around the calf to protect it.

“It is time for the Asian elephants to seriously think about their weight after eating so happily during their months-long epic adventure,” Zhang joked when talking about the herd’s current situation. “The babies have grown up a lot and even dared to leave their mothers’ sight from time to time at their nature reserve in Xishuangbanna.”

“They have a strong sense of family, very much like us,” Zhang told the Global Times on Thursday, recalling even more lovely elephant family moments that he witnessed. Older elephants would walk in front to clear away obstacles for the babies. The mother elephant used her feet to help the baby stop and regain balance when going down the mountain. After finding that a baby elephant had been left behind, the herd turned back and waited for it for over 40 minutes.

Even after spending days and nights during the past three months with the elephants, Zhang still feels that his knowledge of these animals is insufficient. “Their smartness is beyond my imagination. They know when drones are following them and sometimes even chase their shadows for fun,” he said.

When crossing dangerous areas such as rivers and highways, the herd would send a male adult elephant as a scout to observe from a higher position. After it comes back, the herd will then decide how to proceed.

To Zhang, it was evident that the elephant herd’s trust in humans grew over time. In the beginning, they didn’t eat food given by people, but later gradually trusted them and behaved more and more casually by taking snacks and fruits that humans gave them, such as corn cobs and bananas.

“Trust is important, so humans first gave them signs that they were friendly, and they could feel it. We also need to increase our knowledge about them,” noted he. “I hope that everyone will learn more about wildlife living among us to secure their welfare and living space.” 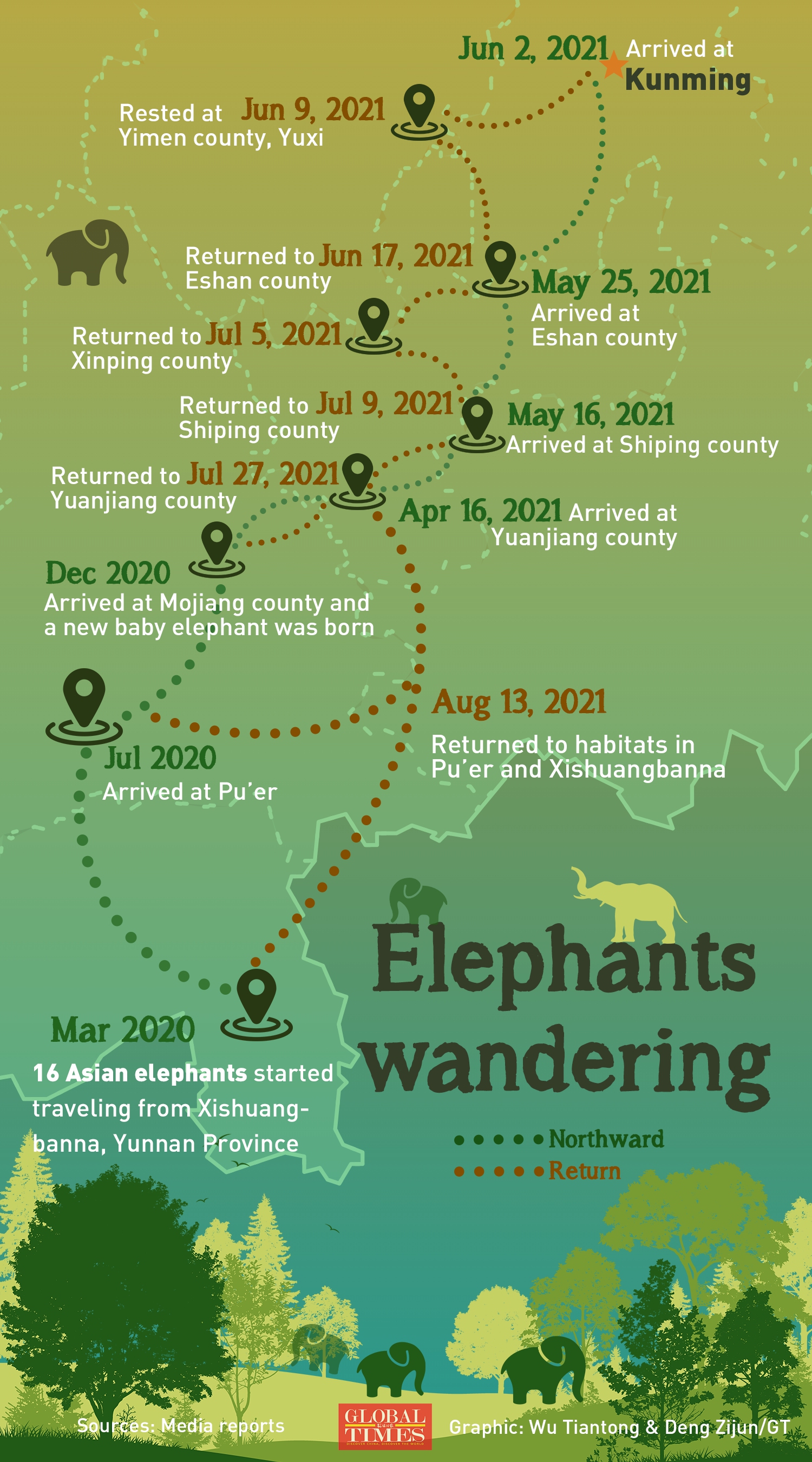 The 16 Asian elephants that started their northward journey in March 2020 from Xishuangbanna returned to their habitat in Xishuangbanna, Southwest China’s Yunnan Province in August, spending hundreds of days and covering over 1,300 kilometers in their wandering. More than 25,000 people were deployed and 180 tons of elephant food were provided to ensure the safety of the elephants and local residents.

Asian elephants are primarily found in Yunnan and are under A-level state protection in China. Thanks to enhanced protection efforts, the wild elephant population in the province has grown to about 300, up from 193 in the 1980s.

During the COP15 meeting, wildlife conservation experts also discussed on Thursday further conservation plans for the species, featuring the establishment of national parks promoting a harmonious coexistence of humans and elephants while being managed by different countries in collaboration.

Chen Mingyong, a professor at Yunnan University’s Asian Elephant Research Center, told the Global Times on Thursday that most Asian elephants in East and South Asia will likely be managed under a national park model that is co-managed by multiple countries including Laos and Myanmar.

“But there are many issues that need to be studied in detail before we can start building a mature system, including how large the scope of the Asian elephant national park should be, what their survival needs are, and how many elephants the existing bases can support,” Chen said. “We have had special meetings to discuss this.”

Chen noted that China has done a good job in building conservation fences, including trails from one protected area to another. “But the protection and management of the habitat require continued work by the teams.”

“We want to understand and build what they need, so in the future the wild elephants will be able to comply with the national park plan.”

On Wednesday, Vice Governor of Yunnan Province Wang Xiangang also noted at a news conference that Yunnan will establish a sound, scientific and long-term management mechanism in line with the growth of Asian elephant numbers, including continuing to study the issue of compensation for accidents caused by Asian elephants and speeding up the creation of the Xishuangbanna Tropical Rainforest National Park.

China’s efforts to protect Asian elephants and other wildlife have also won international praise. During the COP15 meeting in Kunming, several foreign envoys and representatives of international organizations hailed China’s handling of the wandering elephants as a vivid illustration of the country’s biodiversity conservation achievements.

Professor Shahbaz Khan, Director and UNESCO Representative to China, the Democratic People’s Republic of Korea, Japan, Mongolia and the Republic of Korea, told the Global Times that this is not only about the elephants. The story has reached a level where people now know how to take care of a very important species like the Asian elephants, as another baby elephant was born during their journey. People also know how to use technologies like drones to track them, and have a system where people who are affected by the elephants can be compensated.

“This needs a new way of thinking of how nature and humans can coexist,” Khan said.

Thomas Ostrup Moller, the Ambassador of Denmark to China, told the Global Times that Chinese authorities managed the situation well by warning people that the elephants were coming close to their areas, and also respected the elephants’ right to be on the planet, and paved the way for their return.

On Tuesday, Chinese President Xi Jinping noted that the adventure of the wandering elephants across Yunnan reflected the remarkable progress China has made in building an ecological civilization.

Observers say the odyssey of the wild elephant herd in Yunnan and the measures and attitudes taken by Chinese wildlife conservationists are a perfect footnote to China’s growing environmental awareness and harmonious coexistence between humans and animals, as the story reflects the way China is taking action to build a community of life together.