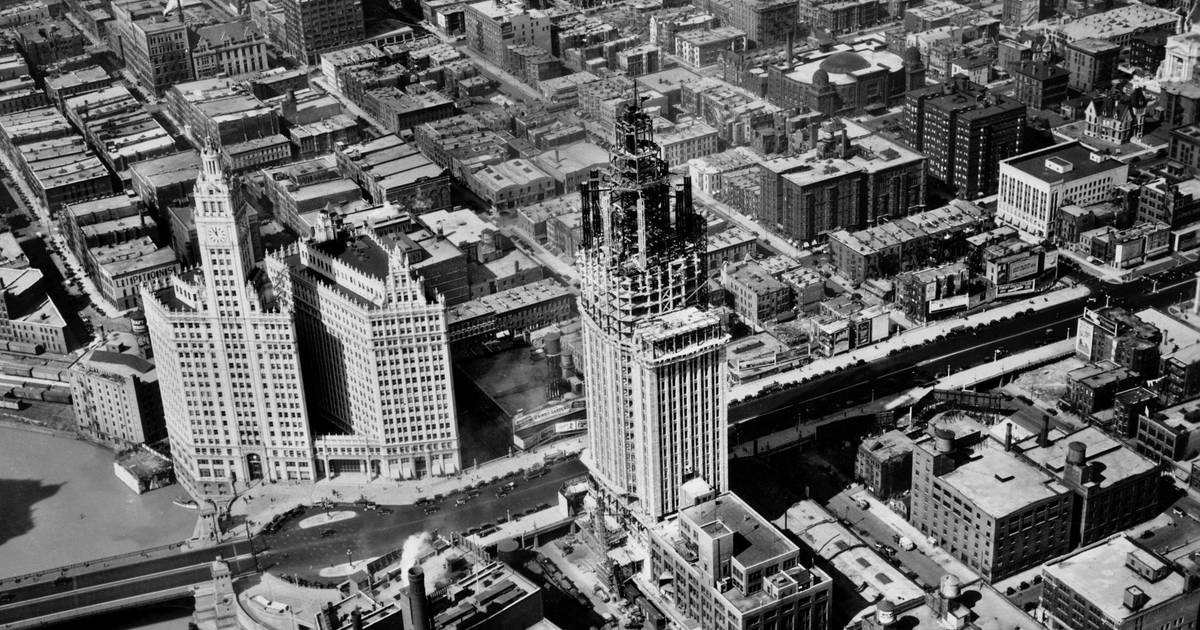 No one can predict the future but shortly before his death in 1899, Joseph Medill, having spent more than four decades growing the Tribune, sat down and wrote a hopeful note: “I want the Tribune to continue to be after I am gone as it has been under my direction: an advocate of political and moral progress and in all things to follow the line of common sense.”

Medill had built the paper’s circulation to a robust 100,000 and it was engaged in intense circulation wars with Chicago’s rival papers, which included The Daily News, the American, the Record-Herald, the Inter-Ocean, the Journal, and the Evening Post. All, and many small neighborhood and ethnic publications, fought for readers in a city of 1.7 million people and growing. It was a city, as British newspaper editor Will T. Stead proclaimed, “Gigantic in your virtues and gigantic in your vices. I don’t know in which you glory most.”

But it was by no means certain that the Tribune would survive, let alone prevail. The paper was nearly sold a number of times in the early years of the 20th century and shadowed by familial tussles in the wake of Medill’s death. But it continued to cover the city.

Some of the news was hopeful but there was much tragedy, and the ways in which those stories were covered by the Tribune not only set the tone for other papers but attracted tens of thousands of new readers.

Trolleys and other vehicles stop on Randolph Street outside the main entrance of Chicago’s Iroquois Theatre shortly after a fire broke out on Dec. 30, 1903. (Associated Press)

One was the fire that swept through the Iroquois Theatre on Dec. 30, 1903. Men, women and children were there to see a play titled “Mr. Blue Beard” when fire erupted. The crowd rushed to the exits only to find many locked. The toll was terrible: more than 600 dead. The Tribune printed a list of all the victims, a then virtually unprecedented tally. The fire prompted widespread changes to public building codes, including the requirement that exit doors swing outward.

As the news kept coming, good and bad, and plentiful, salvation for the paper arrived in 1911, when Medill’s grandsons, Robert R. McCormick and Joseph Medill Patterson, gained control of the Tribune. In 1914, they assumed co-editorship of the paper, alternating month by month. That was an unusual arrangement, somehow fitting though since McCormick and Patterson made an oddly complementary pair.

McCormick was remote and mechanically inclined. He found ways to run the paper more efficiently, establishing paper mills in Canada as reliable sources of the newspaper’s vital commodity. Patterson, as Lloyd Wendt wrote in “Chicago Tribune: The rise of a great American newspaper,” “preferred to be called Joe and was affable, democratic, a free thinker, and he seemed to enjoy the company of common people more than the social and club life into which he had been born.”

He was primarily responsible for such new attractions as advice columns, such as “How To Keep Well,” which was launched in 1911, and comics (see page 16).

Photographs became more prominent and were especially, sorrowfully effective in July 1915, when the SS Eastland sank in the shallow Chicago River, killing 844 Western Electric employees and their families on the way to a company picnic. The Tribune was there and featured in the paper a photo of the boat on its side, with survivors and victims clinging to the hull, the “highlight” of the paper’s extensive coverage, which consisted of 11 pages of photos and text and a list of the dead. It is still considered one of the worst maritime disasters.

WARNING GRAPHIC CONTENT: Rare glass-plate negatives, found in the Tribune’s basement archive, capture the aftermath of one of Chicago’s worst maritime disasters: the sinking of the SS Eastland in 1915. To view a digital graphic novel of the disaster, click here. In this photo, a victim is carried up the SS Eastland as the steamship lies on its side in the Chicago River after slowly rolling over and drowning 844 people July 24, 1915. (Chicago Tribune historical photo)

Circulation continued to climb, reaching beyond 250,00 by 1915. When World War I came, McCormick was off to serve in the U.S. Army, where he had acquired (and would forever keep) the rank of colonel. Patterson was a war correspondent and after the U.S. entered the war was a combat officer. The newspaper carried on.

During this fervid period, the city was quickly modernizing, the old and new mixing with style and awkwardness. For instance, in 1921, city delivery of the paper was accomplished with 68 horse-drawn wagons and 48 motor trucks. “They consume in a month,” noted a company publication at the time, “33,000 pounds of hay, 28,000 pounds of oats and 12,000 gallons of gasoline.”

As the Tribune was thriving, into the decade came a new competitor: radio. The advent of radio struck at the very heart of what newspapers had been doing more or less alone until then: delivering the news first. Radio was faster. Many newspaper owners feared the new medium, refusing even to print program schedules. McCormick was not fearful but rather had the foresight to understand that radio had terrific potential and need not spell the end of newspapers.

In 1924, he acquired one of the first experimental stations and changed its call letters from WDAP to WGN — for World’s Greatest Newspaper, the immodest slogan that the paper began to use on its cover in 1911. WGN would be the first station to broadcast the World Series, Indianapolis 500 and Kentucky Derby, and broke new ground by introducing microphones in the courtroom during the 1925 Scopes “monkey trial” in Tennessee.

In the years after the war, the city had begun to swell with new residents. African Americans came here from the South, drawn by job opportunities. They would form a vibrant cultural community that soon gave birth to Chicago’s versions of blues and jazz and gospel music.

But they also encountered racism as virulent as that they were fleeing. Tension between the newcomers and such established ethnic groups as the Irish, Polish and Germans, led to a string of bombings of African American homes between 1917 and 1921, as well as an eight-day race riot in 1919, about which the Tribune reported extensively, including this sorrowful sentence: “Negroes who were found in street cars were dragged to the street and beaten.”

This was also a period that featured the opening of the Field Museum and the Chicago Theatre, the Black Sox scandal and the birth of the National Football League.

The Tribune was successful in the circulation wars and in 1922 initiated an international design competition for its new headquarters. The building, designed by New York architects Raymond Hood and John Mead Howells, was completed, a Gothic skyscraper rising 36 stories above Michigan Avenue at the river, across from the newly finished Wrigley Building. Naturally, given McCormick’s hyperbolic tendencies, the newspaper referred to it as “the world’s most beautiful office building.”

McCormick moved into palatial offices in the Tower while Patterson was spending more and more time in New York, where, in 1919, he founded and became publisher and co-editor (with McCormick) of the Illustrated Daily News, later to be the Daily News. It was the first U.S. tabloid newspaper and would, in time, have the largest circulation of any paper, with a daily circulation of 2.4 million and a stunning 4.5 million on Sundays.

The paper, which had launched an aggressive though unsuccessful campaign against Prohibition, covered the blood-soaked activities of Al Capone and other Chicago gangsters and expressed justifiable outrage at a certain “massacre” that occurred on Valentine’s Day 1929.

It was verbose in assailing the administration of Mayor William Hale “Big Bill” Thompson, calling him, among many things, a “buffoon” and reflected McCormick’s isolationist views and his conservative stance on political and social trends. For a time its motto was “The American Paper for Americans,” and as the paper’s circulation climbed above 700,000, most saw optimistically a new decade of continued prosperity.

But on Oct. 29, 1929, the stock market crashed. On the day after the crash, came the Tribune headline “STOCK SLUMP ENDS IN RALLY” and the next day came “MARKET SCARE OVER.”