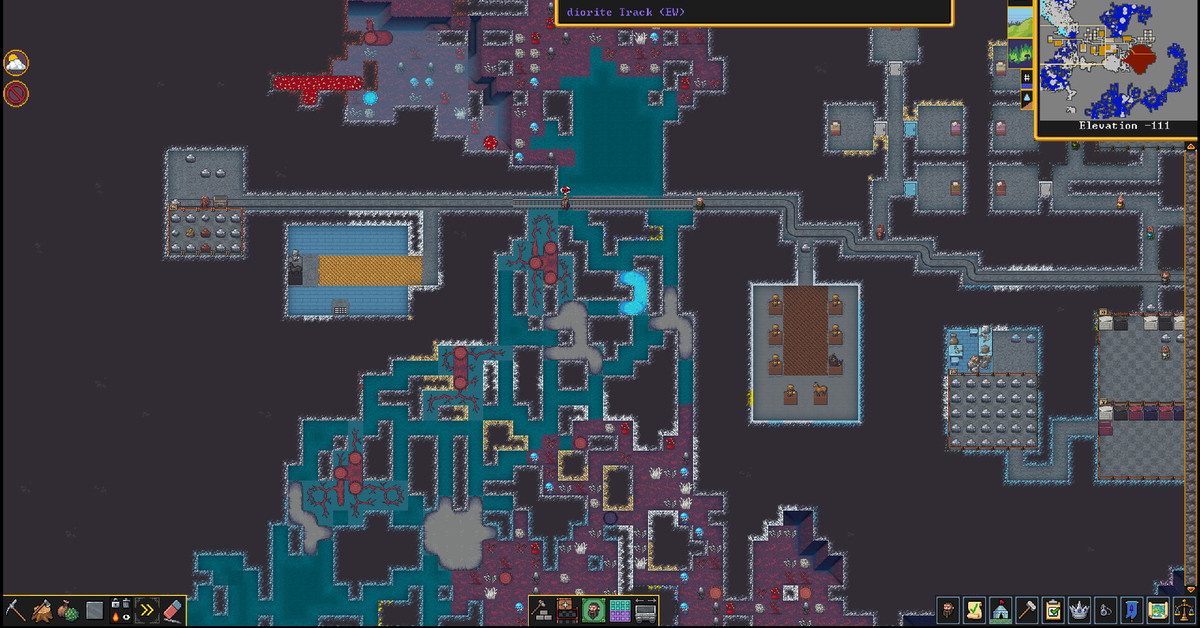 All my animals are dying and my master craftswoman is depressed. Such is the state of my current Dwarf Fortress run. I’ve accidentally made a civilization of drunken vegans, too, since I can’t quite grasp how the hunting system works. Everyone seems pretty happy eating plants and drinking alcohol, though. Everyone except Rakust Locuntun. Every day, she wakes and makes masterwork furnishings. But she misses her family, and simple conversation with friends rarely fulfills her. All around Rakust, her inebriated peers rejoice at the installation of a new tavern, but she can’t find it in herself to care. She dutifully goes back to work, knowing full well the tavern and its revelry won’t satisfy her — that nothing will.

To play Dwarf Fortress is to Google its complexities. To call the game complex is to do it a disservice. The Steam release has a helpful and welcome tutorial, guiding you through the basics of surviving the winter, but in a game where you can open up entire submenus dedicated to diplomacy between civilizations before you’ve had a chance to build so much as a trade depot, my initial hours felt like someone had taught me to spell, only to then immediately ask me to write a novel.

My comparison to the writing process is not accidental. In an interview with The Guardian, Zach Adams, who created the game with his brother Tarn, said that development of Dwarf Fortress began with the two writing short stories. In a more recent conversation with Noclip, Tarn spoke about the game as a sort of writing prompt. “Your own mind is a story-building engine, and we can help that,” he said. “It’s really sort of a collaboration with the player to produce a bunch of stories.”

The word collaboration is key. Dwarf Fortress has demanded more of me than I’m accustomed to when playing games. It asks you not so much to play the game but to participate in it. I struggled at first to feel grounded in what I was doing. Sure, there was the basic video game satisfaction of making order out of chaos, which in this case meant making berries into booze and watching my dwarves’ happiness levels shoot up. But once I had a vaguely functioning miniature society (forgetting, for a moment, all my dying animals), I wasn’t quite sure what I should focus on next. My dwarves were all happy and thriving. Well, all but one.

Rakust Locuntun — a talented carpenter. She’s furnished the entire fortress with beds, tables, chairs — you name it. An odd quirk of her characteristics made it so that she seemed to produce almost exclusively masterwork items. Despite her skill, she finds work unsatisfying. I know this because you can look at a list of her thoughts, which have included:

Reading her thoughts, a story began accumulating in my head: the master craftswoman who feels nothing for her work. Day in and day out, she makes fine goods that delight her fellow dwarves, but she herself takes no pleasure in their creation. She goes through the motions, because she is depended upon. Besides, what else is she supposed to do? She has found her calling, even if it does not feed her soul. She is useful, even if she is not happy.

I felt sad when thinking about her, a feeling that only worsened when I discovered her personality tab. Among the many gutting sentences contained therein included: “She has a great kinesthetic sense, great creativity, a great deal of patience, a very good sense of empathy and a sharp intellect, but she has a little difficulty with words and a large deficit of willpower.” And if that wasn’t devastating enough: “She needs alcohol to get through the working day.” Then finally: “She doesn’t really care about anything anymore.”

There’s no lack of Dwarf Fortress stories online. Many are wild stories, too, much more dramatic than the one I’m telling here. Stories involving zombie camels and chain reactions relating to magma and other deadly fluids. You’ll discover stories of diplomacy gone awry, of bloody war, of ghosts who come back to claim what is theirs. That was my expectation for the game’s story engine going in. That I would have some madcap tale to tell. Instead, I find myself surprised by the game’s capacity to tell smaller stories. Sadder stories. Human ones, despite the subject matter. I’ve barely scratched the surface of what the simulation has to offer, but already my Dwarf Fortress story has become about one artisan’s life and her lack of a sense of purpose. Mechanically, I’m unsure that it’s possible to make her happy. Narratively, I am determined to do so, even at the risk of failure. I worry over a future in which Rakust dies, leaving behind her masterwork goods for future generations to admire and enjoy, their beauty plain to behold, but the pain that went into their creation nowhere to be found.

This is not the story I expected to encounter in this game about managing dwarves and building an economy. Dwarf Fortress is capable of producing epic tales of grand fantasy, as any longtime player will tell you, but its ability to tell a much smaller story caught me off guard. The fact that Rakust’s personal character arc of work and its relation to her self-worth could at any moment be washed away by flood, famine, or magma only makes it all the more important to me.

If you’ll permit me, I have one more writing comparison to make. There’s an oft-quoted bit about writing from Donald Barthelme’s essay “Not-Knowing” that comes to mind when playing Dwarf Fortress. “The writer is one who, embarking upon a task, does not know what to do,” he writes. “Writing is a process of dealing with not-knowing, a forcing of what and how. We have all heard novelists testify to the fact that, beginning a new book, they are utterly baffled as to how to proceed, what should be written and how it might be written, even though they’ve done a dozen. At best there’s a slender intuition, not much greater than an itch. The anxiety attached to this situation is not inconsiderable.”

Dwarf Fortress operates under a similar logic. It will instill in you, the player, that “slender intuition” of what to do. It may, as it did for me, invoke a sense of anxiety as you feel unsure what it is you ought to be doing. But in following your instincts, stories will begin to arise, just as they do for a novelist when they sit down to write. Your base motivation (survive the winter) will be supplanted by something else as you respond to what unfolds before you — whether that be drunken cats or, in my case, a dwarf who struggles to find purpose in life. Your only role, then, is to see that story through.

Dwarf Fortress will be released on Dec. 6 on Steam for Windows PC. The game was reviewed on PC using a pre-release download code provided by Kitfox Games. Vox Media has affiliate partnerships. These do not influence editorial content, though Vox Media may earn commissions for products purchased via affiliate links. You can find additional information about Polygon’s ethics policy here.

A weekly roundup of the best things from Polygon