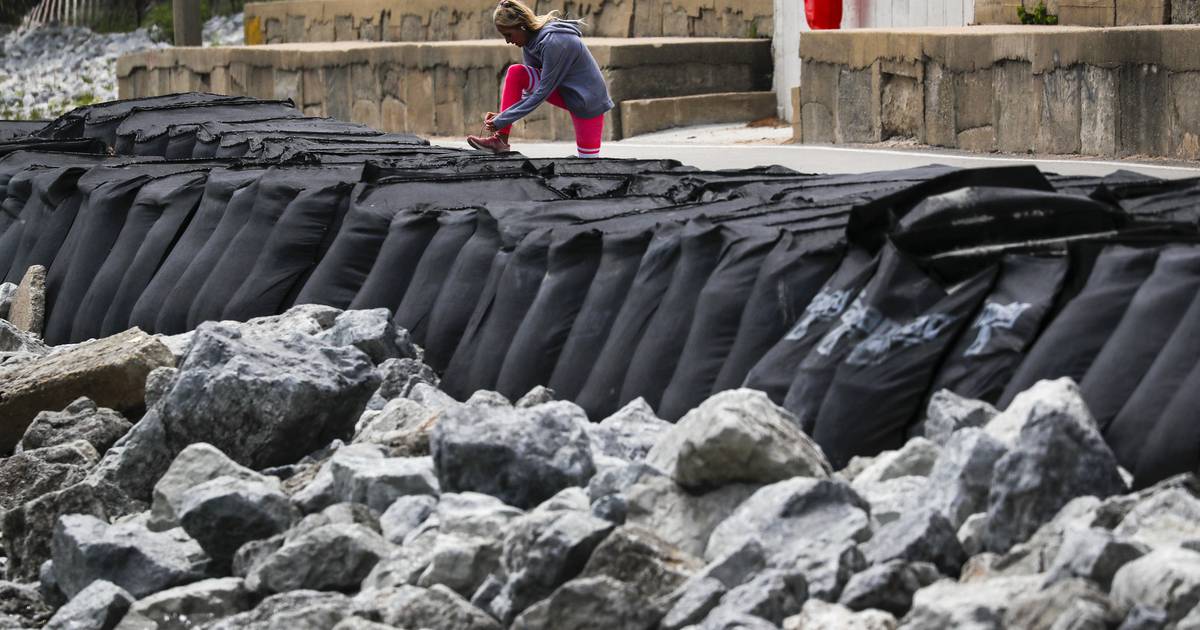 Giant concrete barriers separate a field of jagged rocks from a grassy playground at Rogers Park Beach on Lake Michigan. There is no white sand. Only “do not swim” signs spray-painted on the uninviting blocks.

The city filled in the beach along with three others in the same half-mile stretch after a particularly severe storm in 2020 threatened to erode the beaches entirely.

Kelly Jimenez, 37, lives across the street and visits every day with her son, Alastair, when the weather permits. She and her family moved to their apartment three years ago, and she remembers feeling the strongest sense of community at the beach, where neighbors would come to walk their dogs in the morning with coffee mugs in hand. She said the community is still strong, but the beach was a big part of it.

“The whole neighborhood was really devastated to lose the beaches. Temporary (beach closure) means many, many years in city-talk. We love being on the lake, we love being here. It’s a huge privilege,” Jimenez said Thursday. “The beach was a big part of why we came.”

As Chicago battles erosion intensified by climate change on its 26 miles of public lakefront, officials are scrambling to find more money for repairs, scientists are tracking the disappearing sand and environmental groups are seeking ways to protect the fragile resource.

From the North Side to the Indiana border, years of erosion have taken a toll. Sand loss in places like Rainbow Beach revealed old lakefill material, what appears to be cement pieces used as the foundation of houses, and other debris, according to Robin Mattheus, a coastal geology research scientist with the Illinois State Geological Survey.

“Lake levels came up, and it didn’t take much more than a couple of storms to really move a lot of sand from one portion of the beach to the other. And it’s basically stripped sand off of the old infrastructure that was buried by the beach,” Mattheus said, describing Rainbow Beach.

This year, as the city continues to invest in anti-erosion countermeasures, the U.S. Army Corps of Engineers is poised to conduct a sweeping new study — the first of its kind since the 1990s.

Beach season is relatively short in Chicago, but according to the Chicago Park District, draws millions of people and is a major source of summer tourism.

Twenty-two beaches opened for Memorial Day weekend, and a few souls braved the still ice-cold waters or sweltered on towels in the sand. But even parts of the lakeshore that opened for the summer are showing the effects of several years of severe erosion, intense storms and near record lake levels.

Heather Gleason, the Chicago Park District’s director of development, said the emergency measures at the closed beaches in Rogers Park are meant to be temporary, but any reopenings are contingent on funding.

“We don’t have a specific plan for how it will look because we don’t have the funding,” Gleason said. “So once we get the funding going, then we will go through a community process and discuss what those features will look like.”

In the heart of the city, just steps from the Doane Observatory at Adler Planetarium, hundreds gathered at 12th Street Beach as they enjoyed the three-day weekend and the kickoff of beach season. But 12th Street has also suffered from erosion and, according to the Park District, is in need of repairs to its lake wall — repairs that are set to begin in early June and be completed by October. The beach will remain open during the renovation.

“Anywhere that we can keep the water area and the beach open, we absolutely will because we know how precious beach season is in Chicago,” Gleason said.

While the city works on the normal post-winter repairs, securing funding remains a long-term obstacle for bigger projects. Alongside construction at 12th Street Beach, the revetments at Oakwood Beach in the Oakland neighborhood also need major renovations, but plans have yet to be formalized, Gleason said.

Lakeshore erosion is one of the city’s most visible effects of climate change. Climate scientists agree that storms and weather events in general are getting worse. The World Meteorological Organization released a report in 2021 stating weather disasters around the globe are occurring five times more often and leading to seven times more damage than they did in the 1970s.

According to a 2021 study, between 2012 and 2019 the Chicago shoreline lost an average of nearly half the parts of its beaches that were not submerged. Now, with lake levels swinging in the opposite direction, the effects of that erosion are becoming more visible.

[ How bitter cold winter blasts and a warming planet will chew up the Lake Michigan shoreline, faster and faster ]

In January 2020, severe storms and high lake levels conspired to create one of the biggest threats to Chicago beaches in years and caused an estimated $37 million in damages. The city filled in beaches where waves threatened to overwhelm nearby roadways, like Juneway Beach, one of the Rogers Park beaches that is near Jean Baptiste Point DuSable Lake Shore Drive.

At the time, Mayor Lori Lightfoot requested the Federal Emergency Management Agency declare a lakefront emergency in Chicago. A group of Great Lakes officials estimated at least $500 million of damage to area cities that year.

Lake levels are extremely unpredictable, Mattheus said, an issue that doesn’t affect oceanfront cities as much because the ocean rises and falls in increments of inches. Lake Michigan levels, on the other hand, can vary by several feet.

Mattheus said residents and officials may have forgotten how damaging high lake levels can be after more than a decade of low levels starting in 2000.

“Until lake levels ramped up abruptly starting in 2013,” Mattheus said, “lake levels were really low, and people sort of forgot about what high lake levels could do.”

The lake rose 6 feet between 2013 and the summer of 2020, when it reached near record highs. Since 2020, however, levels began dropping and are now closer to the lake’s long-term average.

Lake levels fluctuate on multiple scales, but climate change could be contributing to more pronounced variations, according to researchers.

This cycle of erosion and exposure is not new, it just appears to be occurring over a shorter period of time, scientists say. In the 1950s and ’60s, rising and falling levels led to the more than $300 million Shoreline Protection Project. It sought to redesign the city’s revetments, which originally consisted of “wood pile cribs filled with stones,” in the 1990s.

“Presumably, as lake levels fall, more and more of that lakefill terrain gets exposed. They might consider covering it up with sand, but that would require moving a lot. I don’t think it’s necessarily going to make it there by natural means. At least, not very quickly,” Mattheus said.

Juanita Irizarry, the executive director of Friends of the Parks, has been an advocate for an open and accessible lakeshore for Chicagoans since becoming director in 2015, whether that means a continuous, unobstructed lakefront or supporting community-minded park programming. She said she recognizes that, in the near future, access to Chicago’s beaches could be hindered by erosion.

The city has a “century-long history” of keeping its shoreline available and free to the public, Irrizary said, whereas other shorelines have not been as well protected from private interests. She hopes to continue that legacy, which includes defending against erosion.

“We really see our lakefront as being a space for public enjoyment of our blue and green spaces,” Irizarry said. “Our access to the water as a public amenity — park or beach — in Chicago is very special.”

Conversations around access also play into overcrowding considerations. In addition to COVID-19 risks as the city recently moved to a “high” community level, overcrowded beaches can contribute to erosion where sand is already scarce.

“Unless there’s a nice, wide beach for people to spread out, if you allow people to come as a large crowd on a small beach, there’s probably a safety factor that’s involved,” Mattheus said. “If erosion is too severe … (it can) jeopardize the integrity of the beach infrastructure.”

Mattheus said the coastal ecosystem is extremely complicated and each beach or stretch of lakeshore comes with its own issues and solutions. An individualized approach that looks at the unique infrastructure and shape of each site is necessary to fully understand the shoreline and come up with ways to preserve it.

The Illinois Geological Survey began working with the city of Chicago a couple of years ago to help track where and how sand moves using sonar studies and environmental mapping. In collaboration with the state’s Coastal Management Project, Mattheus and other researchers have created a list of “priority sites” that they monitor closely for changes. These include the Rainbow and 63rd Street beaches on Chicago’s South Side and Montrose and Foster beaches to the north.

“We’re trying to figure out where and how and why the sand tends to be in certain places,” Mattheus said. “We’re going to try to inventory all the sand that’s out there and available for the beaches of Chicago.”

As the city continues to invest in shoreline restoration, the new Army Corps study, which some advocates say is long overdue, received federal funding late last year as part of the Infrastructure Investment and Jobs Act. The city will match federal funding with a $1.5 million investment.

Mike Padilla, the Army Corps manager in charge of the project, said they are still in contract negotiations with the city but expect work to begin toward the end of summer and be completed in roughly three years.

The study will offer insights to replace the previous 1994 survey and address climate change. Padilla said the Army Corps will poll the community at the beginning of the process and again after solutions have been generated.

Irizarry, who is also in the mayor’s new Museum Campus Working Group, said she wants to push for lakefront investments that will both serve the community and last, something possibly different from the concrete and stone revetments that the city has relied on for decades.

“Wherever the city has an opportunity to think about remaking things along the lakefront, let’s make sure that we’re thinking about nature-based solutions,” Irizarry said. “Let’s make sure that we don’t build something that’s gonna get washed out the next time we have a 100-year storm.”

Back in Rogers Park, leftover construction equipment — an orange cone, long pipes, old metal barricades — sat, seemingly abandoned. Jamara Otson and Shane Clark, both 23, still come to the closed beaches. On Thursday, they climbed over the concrete blocks, picked their way through the field of rocks and waded a couple of feet into the water. They talked a little bit and assumed yoga poses, looking out over the sparkling blue water.

“It’s just peaceful,” said Clark, who has lived in Roger’s Park for about 10 years. He misses playing football and soccer with his friends in the sand but still enjoys the lakefront and the serenity it provides. “You can meditate if you’re feeling down, feeling happy. You could just come here and be in your thoughts and just find peace.”