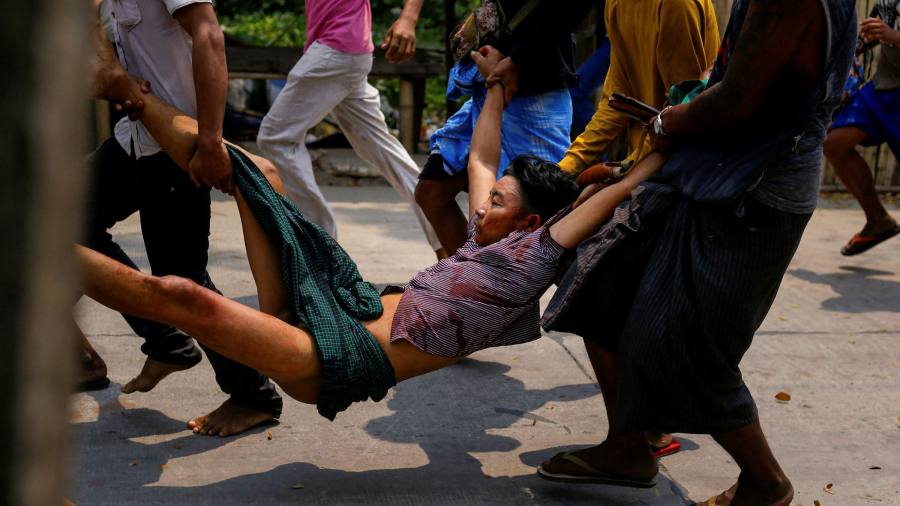 At least 39 people were killed in Myanmar on Sunday and Chinese-financed factories were set ablaze in an industrial zone of Yangon, marking the bloodiest single day since last month’s military coup.

General Min Aung Hlaing’s security forces killed at least 22 protesters in Hlaingthaya township west of the city centre where the factories were attacked, according to the Assistance Association for Political Prisoners (Burma), a human rights group. It said an additional 16 prisoners and a policeman were killed in the country on Sunday.

The Chinese embassy in Yangon confirmed that the factories had been targeted and Chinese personnel injured. It called on Myanmar to take action to prevent further violence and ensure the safety of Chinese workers and property.

China’s embassy said that Chinese garments and textile businesses in Myanmar employed about 400,000, and it urged people to avoid undermining the two countries’ bilateral relations.

“Those who maliciously defame China and instigate attacks against Chinese factories are common enemies of China and Myanmar [and] they must be severely punished,” it said.

However, Myanmar’s Civil Disobedience Movement, which has helped organise nationwide protests and a general strike since the coup, said the “terrorist junta” bore responsibility for burning down the Chinese factories.

“Any crime that happens after Feb 1 2021 is because of power-hungry murderous Min Aung Hlaing and his terrorist junta,” the group said on its Twitter account.

China has not condemned the coup but joined western democracies and Russia in endorsing UN Security Council statements deploring the violence and calling for the release of Aung San Suu Kyi and others arrested since the takeover.

Beijing enjoyed good relations with the government of Aung San Suu Kyi that was toppled last month. However, many anti-regime protesters are convinced China supported the coup, and have staged frequent protests outside Beijing’s embassy.

“China is seen as the target in large part because it is believed to be co-operating with the military,” said Yun Sun, an expert on Myanmar-China relations at the Stimson Center, a think-tank. “As long as China chooses to stay silent and not to oppose the military, this negative view of China among the people will exacerbate.”

The growing violence in Myanmar will probably prompt calls for international action to quell the violence and stop the military regime from using lethal force against protesters.

Film footage from inside Myanmar in recent days has included many images of protesters, including children, who died of head wounds. The footage supports human rights’ groups’ claims that Min Aung Hlaing’s regime had given security forces authority to shoot to kill.

Dan Chugg, British ambassador in Myanmar, said he was “appalled” by the security forces’ use of deadly force on Sunday.

“We call for an immediate cessation of this violence and for the military regime to hand back power to those democratically elected by the people of Myanmar,” he said.

Fortnite – how to get Spider-Man and the mythic item