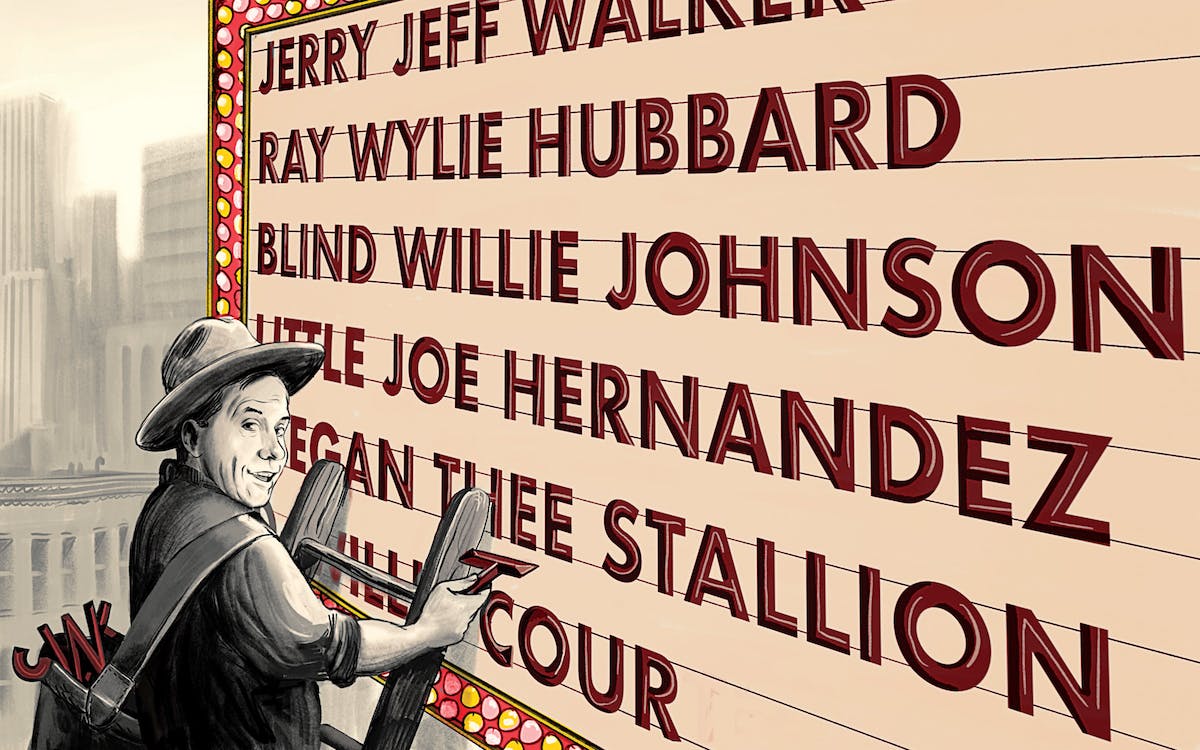 One could also argue that folks who use a middle initial belong on this list too. So, welcome aboard, Gary P. “London Homesick Blues” Nunn and Jeannie C. “Harper Valley P.T.A.” Riley. (The P and the C stand for Phillip and Carolyn, by the way.)

It should be noted that one member of the tres nombres club, Michael Martin Murphey, first gained fame as a member of the dos nombres club. The story of this nomenclatural enhancement is amusingly convoluted. After Michael Murphey had such hits as “Wildfire” and “Carolina in the Pines,” he appeared in a film he cowrote, 1981’s Hard Country, which required that he join the Screen Actors Guild. It turned out, though, that the guild already had a man named Michael Murphy among its ranks. And even though that Michael Murphy (an actor of some note; readers may remember him from such classic films as Manhattan, M*A*S*H, and Nashville), spells his surname differently, the guild determined that the similarity was too close for comfort.

The organization told Michael Murphey he could sign up using his full name, so long as it was different from Michael Murphy’s full name. And it was. The thespian was born Michael George Murphy; the man who ran calling wildfire (technically, “Wi-i-i-iiiii-i-i-ildfire”), was christened Michael Martin Murphey, which is how he has been known ever since. “It’s kinda screwy, I know, but it just stuck,” Murphey told the Chicago Tribune in 1985.

And then there’s the late Jerry Jeff Walker, who was born Ronald Clyde Crosby in Oneonta, New York. On his way from singing in the folk music clubs of Greenwich Village to becoming a beloved Texas troubadour, Crosby apparently workshopped a couple of other stage names, performing, at various times, as both Jerry Ferris and Jeff Walker. Would a singer-songwriter who operated under the name “Jerry Ferris” have made Mr. Bojangles (first and middle name unknown) quite so famous? We’ll never know for sure, though the Texanist suspects that even “Ronald Clyde Crosby” would have done just fine. That’s one hell of a song, after all.

In addition to the two-namer and three-namer categories, there’s a third group that you didn’t mention in your missive, Ray Bluhm: the one-
namers! The roster of Texans who are so familiar that they’ve earned mononymic status includes the likes of Beyoncé, her sister Solange, the late Selena, and the reclusive Houston lo-fi folk artist Jandek (whose real name, by the way, is Sterling Smith, which ain’t half bad). The Texanist would also push to include in this category Buddy, Flaco, Janis, Lefty, Ornette, Roky, Tanya, and Waylon—artists who may not be officially known by one name but are readily identifiable by a solitary moniker.

Willie certainly resides among that set. And George Strait, whom many people refer to as just “Strait,” probably does too. They both earned that affectionate familiarity the old-fashioned way—by being all-around amiable dudes and by making some of the greatest music the world has ever been treated to. Which, to get back to the question at hand, is really the only thing Texans require of their favorite musicians.

As it happens, the Texanist isn’t a musician himself—he has, in fact, been told on multiple occasions that he couldn’t carry a tune in the bed of a pickup truck. But he too plies his trade in a profession in which one’s name is front and center. And sometimes, as many are aware, the Texanist writes for this publication under his given name, David Courtney. It’s a sturdy enough moniker, a pair of stately two-syllable words that, he likes to think, project a solid, everyman authority.

Perhaps, in that imagined world, the Temple-born, golden-voiced D. Willis Courtney, despite possessing great promise in the field of magazine journalism, would have traded his typewriter for an old guitar and one day shared a stage with the likes of Michael Martin Murphey, Willis Alan Ramsey, Ray Wylie Hubbard, Jerry Jeff Walker, and Jimmie Dale Gilmore, who would have joined him for a rousing encore of his smash hit “Mammas Don’t Let Your Babies Grow Up to Be Advice Columnists.”

Perhaps. More likely, that fellow going by the name “D. Willis Courtney” would have been out in the crowd cheering on those triple-monikered talents as they performed their own songs. And that’s just fine with the Texanist—and fine with David Courtney too. Because, you see, Ray Bluhm, at the end of the day it doesn’t matter how many words make up the appellations by which our favorite musicians are known. It’s the tunes that need to be catchy, not the names.

Thank you! Good-night! (The Texanist, er, D. Willis, takes a bow, waves, and exits the stage.)

Have a question for the Texanist? He’s always available here. Be sure to tell him where you’re from.

This article originally appeared in the September 2022 issue of Texas Monthly with the headline “The Texanist.” Subscribe today.