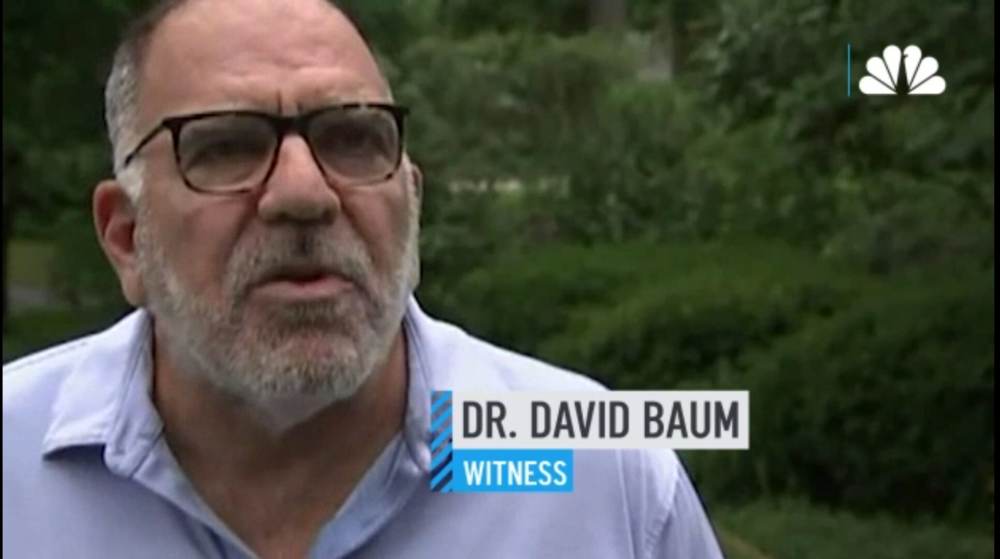 Dr. David Baum, who says he was at the Highland Park, Illinois Fourth of July parade Monday morning when the rooftop sniper opened fire on the parade, told WMAQ-TV the dead and the wounded had “horrific” wounds that are seen in war. Baum said he performed CPR on a wounded child. Police report six people died–five declared dead at the scene–and twenty-six were wounded in the attack. Dr. Baum “…All of a sudden you heard these Howitzer-type noises going off. Pow! Pow! I mean a sound I’d never heard before. Um, ten seconds later you hear people screaming, “Bodies down! bodies down!”, and everyone starts scattering. The people who were gone were quickly identified by the paramedics, because they had horrific injuries–the kind of injuries you probably see in wartime, the kinds of injuries that only probably happen when bullets can blow bodies up. And these bodies were, they were gone. They covered ’em up immediately and went on to trying to get other people out. I helped, we, we helped try to move people to a staging area where the ambulances were coming. That’s all we were doing. We didn’t, you know, there was only so much people could do, but, you know.”

Reporter: “I think you, you said earlier when you spoke to us earlier on, on the phone that one of the people you helped was a young child.”

Dr. Baum: There was a young child there that people were, I was doing a little CPR until the paramedics got there. And he looked horribly injured, I’m not sure of exactly of the injury. But, I mean, people were doing anything they could. It was, it’s a mass casualty scene. And there weren’t enough people there immediately but who would have thought, you know…”

Bloodbath at #Highland Park July 4th parade.. I was there.. story at @suntimes pic.twitter.com/zuUQMO7Dxy

Initial reporting by the Sun-Times on the carnage:

Miles Zaremski, a Highland Park resident, told the Sun-Times: “I heard 20 to 25 shots, which were in rapid succession. So it couldn’t have been just a handgun or a shotgun.

Zaremski said that after the shots at Central Avenue around Second Avenue in downtown Highland Park, he saw “people in that area that got shot,” including “a woman covered with blood . . . She did not survive.”