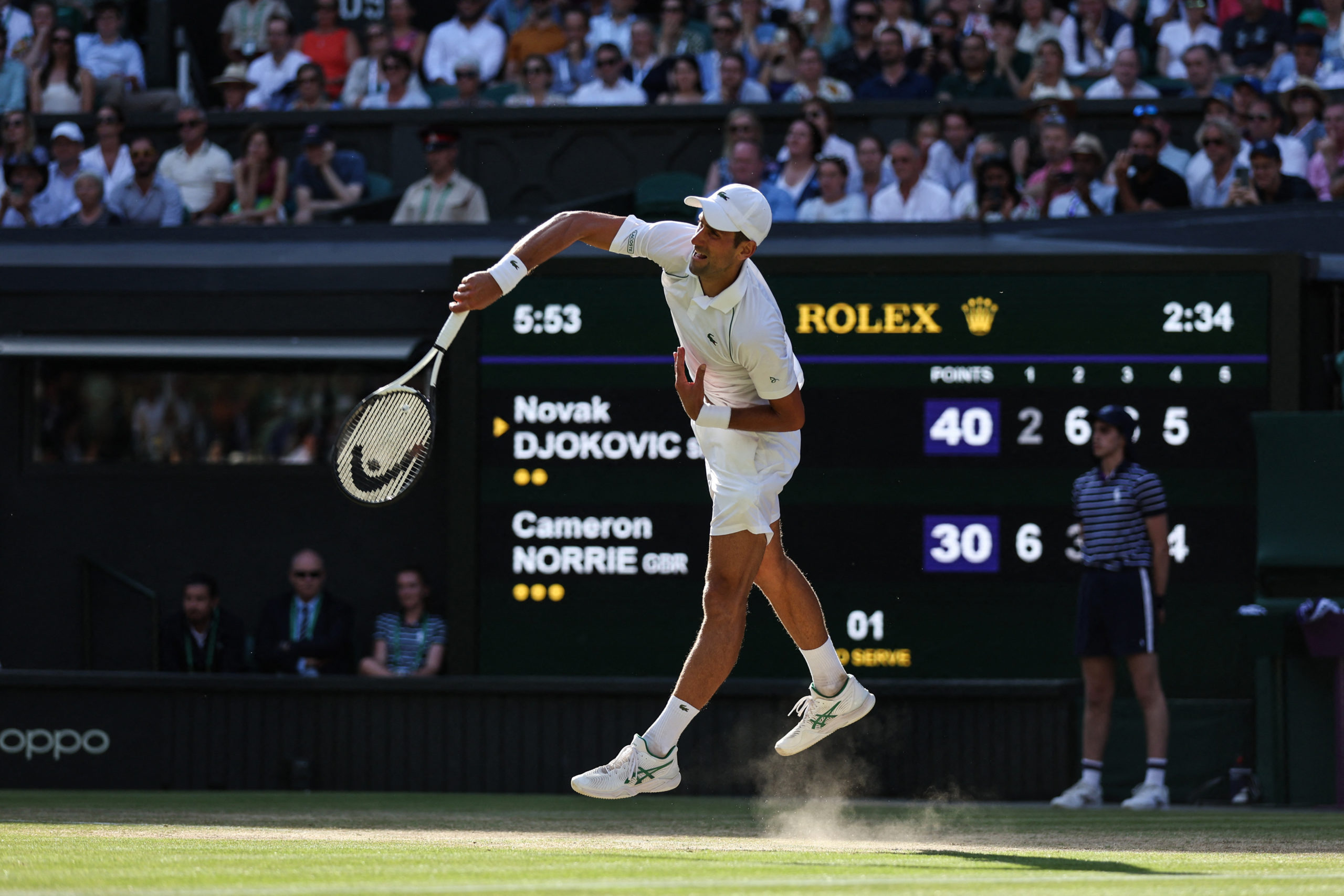 Serbia’s Novak Djokovic serves against Britain’s Cameron Norrie during their men’s singles semi final tennis match on the twelfth day of the 2022 Wimbledon Championships at The All England Tennis Club in Wimbledon, southwest London, on July 8, 2022. (Photo by Adrian DENNIS / AFP)

The Serbian top seed was uncharacteristically off-colour in the first set but roared back to win 2-6, 6-3, 6-2, 6-4, playing near-flawless tennis.

It will be a record 32nd Grand Slam final in the men’s game for the six-time Wimbledon champion — taking him one clear of Roger Federer and two ahead of Rafael Nadal.

Djokovic already knows he will be facing Kyrgios after Nadal pulled out Thursday ahead of his semi-final against the Australian, with an abdominal injury.

The Serb, who has a 2-0 losing record against Kyrgios, promised “fireworks” as he targets a 21st Grand Slam singles title on Sunday — which would take him one clear of Federer and one behind Nadal in the race to be crowned the greatest of all time

“The job is not finished,” said the 35-year-old. “One thing is for sure — there are going to be a lot of fireworks emotionally from both.”

“He’s playing so freely,” he added. “He has one of the biggest serves in the game. We haven’t played for some time.

“I’ve never won a set off him. Hopefully it can be different this time. It’s another final for me at Wimbledon so hopefully the experience can work in my favour.”

A sluggish Djokovic was broken three times in the first set against Norrie but turned the tables dramatically on the British ninth seed.

The top seed looked more composed at the start of the second set, finding more rhythm on his serve and cutting out the errors.

A single break in the eighth game changed the complexion of the match, putting him 5-3 up.

That was part of a run of eight games out of nine for Djokovic, who took the second set and then rocketed into a 5-1 lead in the third, giving Norrie a mountain to climb.

Djokovic again broke early in the fourth set and did not concede a single break point as he cantered to victory.

He is now on a 27-match winning streak at Wimbledon as he seeks to draw level with Pete Sampras on seven titles at the All England Club — just one behind Federer’s men’s record.

Kyrgios was kicking his heels on Friday, deprived of the chance to repeat his famous 2014 victory over Nadal at Wimbledon, which the Spaniard avenged three years ago.

The Australian, who will be playing in his first Grand Slam final, said Friday he was disappointed not to have the chance to face Nadal, proclaiming that “everyone did want to see us go to war out there”.

“Obviously you never want to see someone like that, so important to the sport, go down with an injury like that,” he said. “I’m sure I’ll play him again on a big stage.”

Kyrgios’s tournament has been a mixture of breathtaking shot-making and rants — including a demand that third-round opponent Stefanos Tsitsipas be thrown out of the championships for hitting a ball into the crowd.

He has been fined a total of $14,000 for his antics, which included spitting towards fans, and now has the added distraction of a looming court appearance in Australia, related to an allegation of assault.

“I never thought I’d be here at all, to be brutally honest with you,” said the 40th-ranked player, aged 27.

“But I’m just super proud and I’m just ready to go. I’m going to give it my all and we’ll see what happens.”

On Saturday, world number two Ons Jabeur will attempt to become the first African woman to win a Grand Slam in the modern era when she takes on Russian-born Elena Rybakina, who is representing Kazakhstan.