I’m really excited to be collaborating again with Peter Broderick to put together two new “Distribution U.” workshops next month: one at NYU on November 13th, and one at UCLA on November 20th.

We did the first “trial” one of these last November, filling up a ballroom at USC with 200-plus filmmakers and producers. If you know people who were there, they’ll tell you about the incredibly positive vibe. The attitude was: if everyone is exclaiming that “the sky is falling” on independent film, how can we survive and thrive and help one another in a world with a slightly lower sky?

The event has a couple objectives:

– Let filmmakers connect, find new ways to collaborate, and help one another succeed.

– Talk about what’s changing in terms of funding, distribution, and audience-building, with actual examples and case studies, rather than theoretical predictions.

– Hear directly from filmmakers about what they’ve done successfully with their most recent films to get them seen by a large audience, and earn a solid return. (We also talk about what didn’t work, and wasn’t worth the time or investment.)

– Enable participants to sit down with industry experts for small group lunch conversations on very specific topics, like working with the media and bloggers… understanding the way VOD deals work… organizing theatrical screenings that make money… and more.

– Provide ideas and strategies to several filmmakers in the audience, as part of an on-stage brainstorming session.

– Get participants charged up and excited about new possibilities, as opposed to depressed about how things are changing. 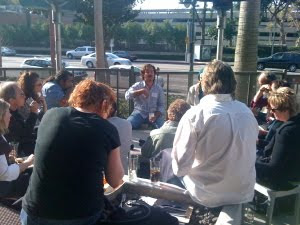 New York Times film critic Manohla Dargis was at the first Distribution U. workshop last year, and she used it as the basis for her article “Declaration of Indies: Just Sell It Yourself.” Documentary Magazine called the event “casual, participatory, and supportive.” One of our industry experts from 2009 told us, “The room felt like the future to me…” (At left is Oscar-nominated producer Adrian Belic leading a lunch discussion at the first Distribution U.)

I hope you can make it November 13th in New York, or November 20th in Los Angeles. And we’re so grateful to our friends at New York University and UCLA’s School of Theater, Film and Television for making these two events possible.

Also: there’s an early bird registration rate that will last until next Wednesday, October 13th at midnight. Grab a seat soon…and come with your enthusiasm, questions, awesome projects, and ideas.