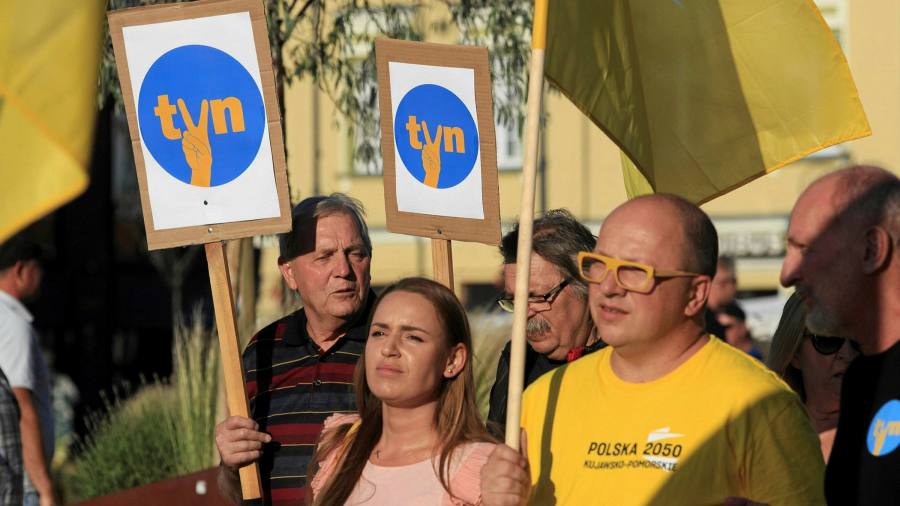 Sign up to myFT Daily Digest to be the first to know about Press freedom news.

Discovery, the US media group, said on Thursday that it would take legal action against Poland’s government, accusing the country of a “discriminatory campaign” against its Polish business, TVN.

The announcement came a day after Poland’s ruling Law and Justice party (PiS) and its allies voted through legislation that would block companies outside the European Economic Area from owning controlling stakes in Polish media groups.

If approved by Poland’s upper house and president, the legislation could force Discovery to sell its stake in TVN, which is one of the biggest US investments in the country and the main independent broadcaster.

Discovery said it was taking the action because of the proposed legal change, which was passed by Poland’s lower house during a turbulent session on Wednesday night, as well as in response to the government’s 18-month-long refusal to renew the license of its TVN24 news channel.

“The legislation is the latest assault on independent media and freedom of the press, and takes direct aim at Discovery’s TVN,” Discovery said in a statement.

“Over a number of years, the current Polish government has targeted TVN in an arbitrary and discriminatory manner as part of a broader crackdown on independent media and in direct violation of legal protections around freedom of expression.”

PiS officials claimed the law was needed to prevent companies in undemocratic states from taking control of Polish media outlets. But the changes are widely seen as an attack on TVN, which has long found itself in the government’s crosshairs for its often critical coverage.

Discovery said it hoped for a “positive resolution” of the dispute, but added that if this did not occur, it would take action under the US-Poland bilateral investment treaty and seek “full compensation for Poland’s breaches”. It did not specify how much this would be.

Polish officials did not immediately respond to a request for comment outside office hours on Thursday night.

Since coming to power in 2015, PiS has taken steps that undermined media freedoms and sent Poland tumbling from 18th to 64th in the World Press Freedom index.

Last year, it used a state-controlled oil refiner to buy up a media group that publishes 20 of Poland’s 24 regional newspapers and more than 120 local magazines. It has also reduced the public broadcaster to a claque.

The changes to the media law have drawn condemnation from the US and the EU. Vera Jourova, the European Commission vice-president, said the EU needed a media freedom act to promote press freedom throughout the bloc.

“Media pluralism and diversity of opinions are what strong democracies welcome, not fight against,” she wrote on Twitter on Thursday.

Antony Blinken, US secretary of state, warned on Wednesday that the media law changes could undermine Poland’s investment climate. “Large US commercial investments in Poland tie our prosperity together and enhance our collective security,” he said.

Poland’s prime minister Mateusz Morawiecki hit back on Thursday, saying that the changes to the media law were not targeted at TVN.

“The intention is to tighten the rules so that we can’t end up in a situation in which, for example, companies from outside the EU can buy up Polish media at will,” he said.

Zalmay Khalilzad steps down as US envoy to Afghanistan