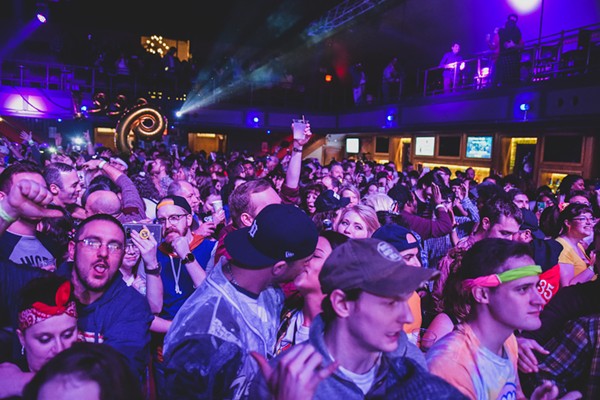 A crowd at Saint Andrew’s Hall.

The venue was shut down for repairs after a joint in the floor became loose during a March 8 concert by rapper Baby Keem, cutting the show short by 20 minutes. During its downtime, previously booked shows were relocated to other venues when possible.

Its owners publicized the completion of repairs and the reopening of the venue on Tuesday, following a sold-out yet low-key show by the singer Keshi on Monday.

“We thank fans for their patience and are excited to welcome all back to Saint Andrew’s Hall + The Shelter beginning today!” the venue’s owners wrote on Facebook.

The venue has a full schedule of booked entertainment available on the Saint Andrew’s website. Those include shows at the 1,000 capacity Saint Andrew’s Hall as well as the smaller 400-capacity attached venue, The Shelter.

It’s also hosting a job fair from 1-6 p.m. on Thursday, June 9 for positions including security, guest services, and housekeeping. Applicants can email [email protected] for more information. The venue touted free concerts as a perk.

According to a May 26 Detroit News article, Detroit’s Buildings, Safety, Engineering, and Environmental Department issued a permit to Saint Andrew’s Hall on April 14 to make interior alterations to the structural floor reinforcements, a project estimated to cost $50,000 and to be completed within 60 days.

The venue passed a final inspection on May 26, according to the Detroit News.

A representative from operator Live Nation declined to comment.

Two Detroit rappers are on the 2022 XXL Freshman list and a local pastry chef wins a James Beard Award: The top 10 Metro Times headlines of the week | ICYMI | Detroit