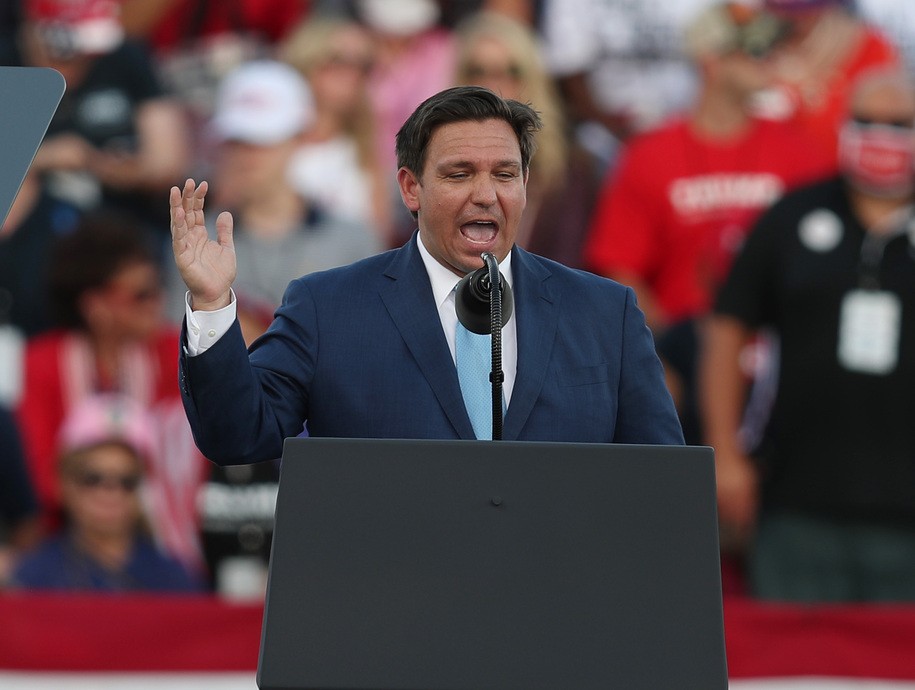 DeSantis did not apologize for or acknowledge the disproportionate number of vaccine appointments the wealthy had access to. Instead he defended his decision, claiming that “it wasn’t a choice about zip codes,” but where seniors were located. “If there’s going to be folks that are going to complain about getting more vaccines […] I mean, I wouldn’t be complaining,” he said. “I’d be thankful that we’re able to do it because, you know what, we didn’t need to do this at all.”

He also claimed that doses distributed at the location were in addition to doses already allocated to the county, but local Democrats didn’t buy it. DeSantis “must stop playing politics with the vaccine distribution here in Florida,” Florida Democratic Party Chair Manny Diaz said in a statement. “Threatening retribution and less vaccine access for communities that criticize the vaccine rollout for its problems is shameful and inhumane.”

The vaccination spot was announced on Tuesday for 3,000 Manatee County Residents. According to The Washington Post, at least 180,000 residents in the county, which lies south of Tampa, have signed up for the vaccine but have been unable to access it due to limited supply. Although the vaccine clinic was advertised as a county initiative, it was limited to people living in only two zip codes: 34202 and 34211.

Local lawmakers from both the Republican and Democratic Parties have criticized the move as these two zip codes represented the most affluent communities of the county. Additionally, the zip codes account for only 8% of Manatee County’s 30,557 confirmed coronavirus cases. One of the communities that has access to the extra vaccines includes a planned community that is owned by the family of one of DeSantis’s campaign donors, the South Florida Sun-Sentinel reported.

“We have people struggling with the virus. If we were going to pick and choose, I would hope it would go to the underserved populations and neighborhoods,” Manatee County Commissioner Misty Servia said at a meeting Tuesday. “You’re taking the Whitest demographic, the richest demographic in Manatee County and putting them ahead of everyone else,” she added.

Another commissioner, Reggie Bellamy, noted that the system cannot be compromised and that representatives like himself have been “fighting like hell to show people that the (vaccine) lottery is equal … And now all of a sudden someone is telling me that we were able to go in and pull names out — pull a certain demographic out — and say, ‘These are the people that we’re going to serve,'” he said.

But local lawmakers are not the only ones to criticize DeSantis and his clearly political move.

Democratic state Sen. Annette Taddeo said that “it’s disgusting and unacceptable for the governor to politicize life-saving vaccines … The Governor owes Manatee county residents an apology and a public statement reassuring the public that political games will not be used in the distribution of vaccines in our state. Period,” she added in a statement.

U.S. Rep. Debbie Wasserman Schultz also issued a statement to the South Florida Sun-Sentinel on DeSantis’ decision to favor his political supporters. “To threaten that he would pull vaccine if people don’t like the way the distribution system is working is vile and shows the callous indifference he has had in how the vaccine has been handled,” Schultz said Wednesday.

As of this report, Florida has reported more than 1.8 million COVID-19 infections and nearly 30,000 deaths as a result, according to NBC News. The state has one of the highest rates of infection. Despite this, DeSantis continues to ignore efforts to stop the spread of the virus.

The Centers for Disease Control and Prevention data indicates that more than 1.1 million Florida residents have received two doses of the COVID-19 vaccine, while another 1.3 million in the state of 21 million have received their first dose. Access to the vaccine should not be determined by what political party you follow and who you support. DeSantis must stop playing political games in efforts to advance his career.