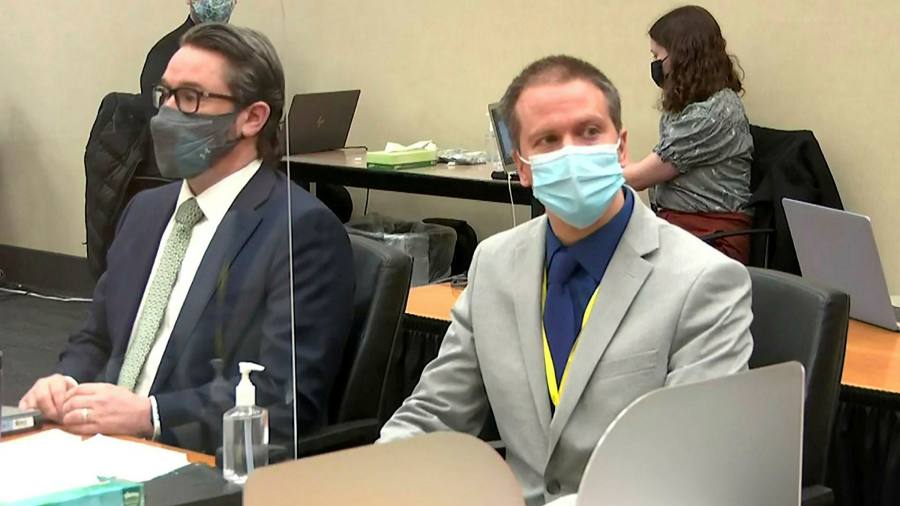 The trial in Minneapolis has been one of the most closely watched US court cases in years, and comes at a time of calls for greater accountability when police kill men and women in the line of duty. Jury selection began March 9, and opening statements began March 29. Jurors deliberated roughly 10 hours before announcing they had reached a verdict.

Last May, Chauvin knelt on Floyd’s neck for more than nine minutes while arresting him for allegedly using a counterfeit $20 bill.

A crowd grew outside the Hennepin county government centre in downtown Minneapolis ahead of the verdict. One person led a familiar chat, shouting, “Say his name,” to which the crowd responded, “George Floyd”.

The city has expected protests after the verdict, regardless of the jury’s decision. The government centre has been barricaded with a fence topped with concertina wire since March. The National Guard increased troops in the metro area last week following civil unrest in a northern suburb after police shot a 20-year-old black man during a traffic stop.

The charges against Derek Chauvin

Second-degree unintentional murder requires that prosecutors prove the defendant committed the murder while committing a felony — in Chauvin’s case, the alleged felony was assault. They did not need to prove an intent to kill, only an intent to commit the assault. The maximum penalty is 40 years in prison.

Third-degree murder, which carries a 25-year maximum sentence, applies to a defendant who kills someone while committing an “eminently dangerous” act “and evincing a depraved mind”.

Second-degree manslaughter requires proving that a defendant acted with “culpable negligence” by creating “an unreasonable risk” of killing someone. Defendants face up to 10 years in prison if convicted.

Six of the 12 jurors were white, four were black, and two were multiracial, according to the Minnesota newspaper the Star Tribune.

The trial revolved around two issues: whether Chauvin’s use of force was justified and the precise cause of Floyd’s death.

Minneapolis police chief Medaria Arradondo took the stand to condemn Chauvin’s actions, while defence attorney Eric Nelson said force can be “awful but lawful” and that Chauvin should be judged on what any reasonable officer would have done in similar circumstances.

Prosecution witnesses primarily cited asphyxia as Floyd’s cause of death, and medical examiner Andrew Baker said he died from cardiopulmonary arrest while being restrained by law enforcement. A lawyer for Chauvin said Floyd died of cardiac arrhythmia, pointing to prior health problems and drug use.

Race has been a central element of the trial and the attention around it, although both prosecutors and defence have tried to separate the court case from its social context. Police are rarely charged when they kill someone in the line of duty, let alone convicted.