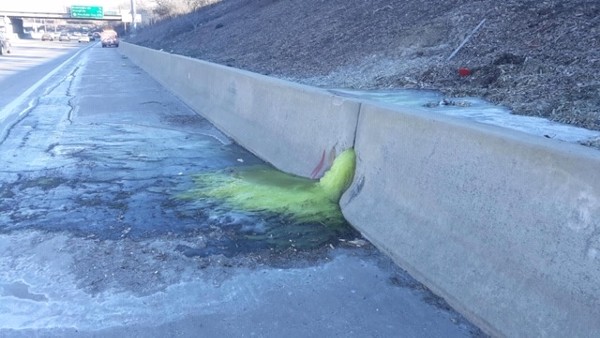 Green liquid oozing from retaining wall along I-696.

An industrial site that oozed a toxic green slime onto a Detroit highway in December 2019 is finally getting demolished.

The Environmental Protection Agency spent more than $3.1 million to clean up the site and prepare it for demolition.

“Fortunately, the county was able to step in and support the City of Madison Heights through this unfortunate situation,” Oakland County Commissioner Gary McGillivray said in a statement Monday. “With the funding the county provided, we’ve been able to help protect the public health and welfare of Oakland County residents by assisting with the demolition of this troublesome site.”

State Sen. Jeremy Moss, D-Southfield, said the incident is a reminder of the importance of holding polluters accountable and protecting the public.

“Madison Heights endured the saga at Electro-Plating Services for far too long and this demolition will provide overdue closure for our community,” Moss said. “We worked closely with our partners in City Hall to express the urgency to help clean up this site and I’m grateful that my colleagues in the Legislature supported our request to allocate the funding needed to bring this building down. This entire incident should compel all of us to be better stewards of our environment and I’ll continue this work in the State Senate to ensure polluters are held accountable.”

The owner of the factory, Gary Alfred Sayers, was sentenced to a year in prison in November 2019 for illegally storing hazardous materials at the site. Some of the hazardous materials were stored in a dirt hole in the basement, where the chemicals seeped into the ground and eventually found a path onto the freeway.

The green slime was groundwater contaminated with cancer-causing hexavalent chromium, which was featured in the movie Erin Brockovich.

“Madison Heights is extremely thankful to all levels of government that have contributed to making this demolition possible, and for their support over the past two years during the cleanup efforts at the Electro-Plating Services site,” Madison Heights Mayor Roslyn Grafstein said. “The safety of our city’s residents is a concern for the entire region, and we’re happy to see that the City can depend on our elected officials at all levels to have our back when it’s most essential.”