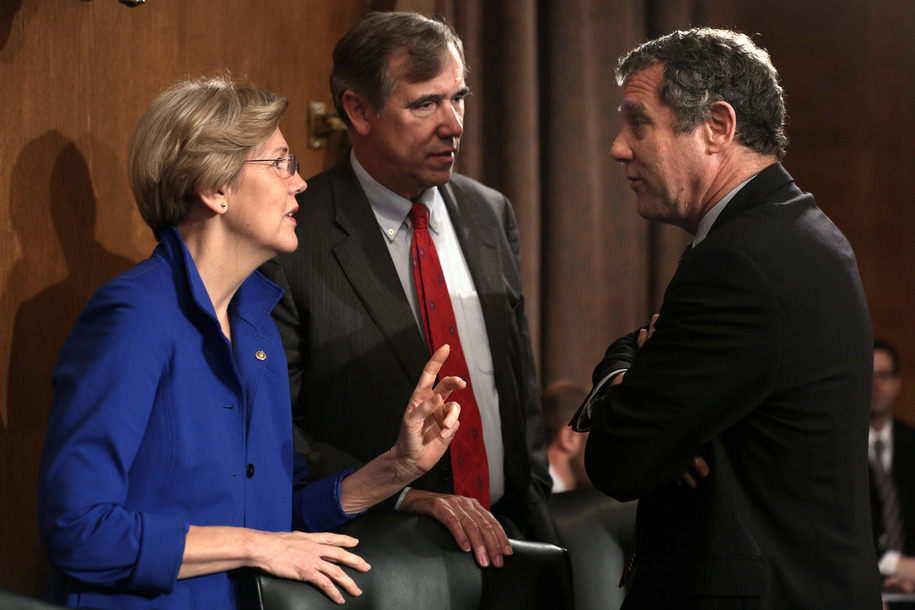 Sen. Sherrod Brown, the Banking Committee chair, spoke for pretty much every Democrat who isn’t Manchin or Sinema. Any “bipartisan” deal has to be viewed “with skepticism that Mitch McConnell’s earned,” he said Tuesday. “McConnell has repeatedly said he wants Biden to fail. And you know the Republican conference doesn’t do anything that McConnell doesn’t bless,” Brown told Politico. “There’s no genuineness about paying for it … we’re not going to do a gas tax, and they’re not going to ask people that got tax cuts four years ago to ante up anything.” He said Democrats are working on reconciliation—which they can pass with just Democratic votes—because Republicans “are not genuine on this, on anything.”

The two-track, bipartisan agreement welded together with a broader reconciliation package has apparently been blessed by leadership.

Other notable thing here is Merkley and Markey say they have the support of Schumer for this strategy. And Markey says he wants to *cancel recess* if they don’t have a deal by early August …

Other Senate Democrats are speaking up as well, including Hawaii’s Mazie Hirono and Minnesota’s Tina Smith.

“However, if the support for this bill is tied to support for the American Families Plan… then this may be a way to proceed,” she said
That is how many on left view it: https://t.co/91jTs81IYa

Sen. Tina Smith says that a bipartisan infrastructure bill and a reconciliation bill need to be “chained together with a lock that cannot be broken”

They join a handful of additional senators, including some who generally fall into the “moderate” category like Colorado’s Michael Bennett, who insist that they cannot support any bill that doesn’t include climate policies. Among them is Finance Committee Chairman Ron Wyden.

That’s all on the Senate side. Any bipartisan effort that miraculously passed in the Senate would also have to make it through the House, and Rep. Pramila Jayapal (Washington), promises that her Congressional Progressive Caucus will oppose that bill unless it is paired with a broader, separate bill. That message has been heard by leadership. “The White House made clear to us in our conversations today that we are prepared to take a two-track approach,” House Democratic Caucus Chair Hakeem Jeffries of New York told reporters Tuesday. “If the obstructionists prevail,” Jeffries said, Democrats will go it alone.

That means, however, a delay. As the calendar now stands, the reconciliation bill that would include the big parts of Biden’s plan can’t happen until fall. House Budget Chairman John Yarmuth told reporters on Tuesday that he is on track to have the budget reconciliation package—which has to include the fiscal 2022 budget resolution—on the floor before August recess.

Of course, this could all be done sooner, if House Speaker Nancy Pelosi and Majority Leader Chuck Schumer got really serious about dealing with all of the problems facing the nation and canceled recess.