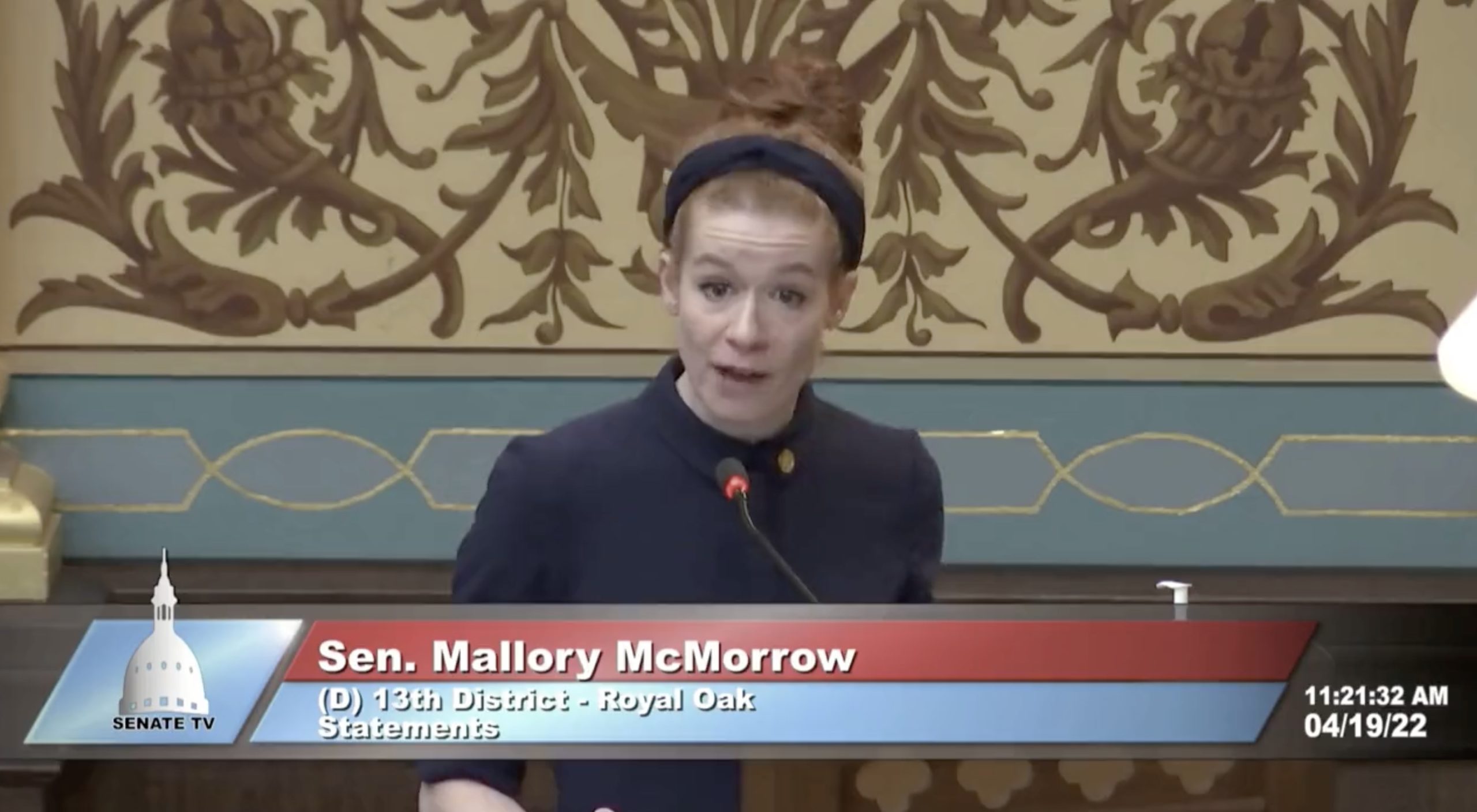 Michigan State Senator Mallory McMorrow (D-Royal Oak) blasted the Republican who so hatefully accused her of being a “groomer”. The 13th District Democrat wrote: “Senator Lana Theis accused me by name of grooming and sexualizing children in an attempt to marginalize me for standing up against her marginalizing the LGBTQ community…in a fundraising email, for herself.

“Hate wins when people like me stand by and let it happen. I won’t.”

McMorrow was just getting warmed up. She pointed out the real problem Republicans have with her, “I’m the biggest threat to your hollow, hateful scheme. Because you can’t claim that you’re targeting marginalized kids in the name of “parental rights” if another parent is standing up and saying no.”

The Democratic state Senator’s speech is so good that former Secretary of State and Democratic presidential candidate Hillary Clinton shared it, writing, “Please watch this incredible speech from Michigan State Senator @MalloryMcMorrow, who is not standing by.”

Here’s her entire speech, as she shared it on Twitter:

I sat on it for a while wondering why me?

I’m the biggest threat to your hollow, hateful scheme. Because you can’t claim that you’re targeting marginalized kids in the name of “parental rights” if another parent is standing up and saying no.

So you dehumanize and marginalize ME. You say I’m one of THEM. You say she’s a groomer, she supports pedophilia, she wants children to believe they were responsible for slavery and to feel bad about themselves because they’re white.

Here’s a little background on who I really am.

Growing up my family was active in our church. I sang in choir. My mom taught CCD. One day, our priest called a meeting with my mom and told her that she was not living up to the church’s expectations, b/c she was divorced, and because he didn’t see her w us at mass every Sunday.

Where was my mom on Sunday?

She was at a soup kitchen. With me.

My mom taught me at a young age that Christianity and faith was about being a part of a community, about recognizing our privilege and blessings and doing what we could to be of service to others –
especially people who were marginalized, targeted, who had less…often unfairly.

I learned that SERVICE was far more important than performative nonsense like being seen in the same pew every Sunday or writing “Christian” in your Twitter bio and using it as a shield to target and marginalize already-marginalized people.

I also stand on the shoulders of people like Father Ted Hesburgh, the longtime president of the University of Notre Dame who was active in the civil rights movement, who recognized his power and privilege as a white man, a faith leader, and the head of an influential and well-respected institution – and who saw Black people in this country being targeted and discriminated against and beaten, and reached out and locked arms with Dr. Martin Luther King when he was alive, when it was unpopular and risky, and marching with them to say, “We got you.” To offer protection and service and allyship, to try to right wrongs and fix the injustice in the world.

So who am I? I am a straight, white, Christian, married, suburban mom who knows that the very notion that learning about slavery or redlining or systemic racism means that children are being taught to feel bad or hate themselves because they are white is absolute nonsense.

But each and every single one of us bears responsibility for writing the next chapter of history. We decides what happens next, and how WE respond to history and the world around us.

We are not responsible for the past. We also cannot change the past. We can’t pretend that it didn’t happen, or deny people their very right to exist.

I want my daughter to know that she is loved, supported, and seen for whoever she becomes. I want her to be curious, empathetic, and kind.

I want every child to feel seen, heard, and supported, not marginalized and targeted if they are not straight, white, and Christian.

People who are different are not the reason our roads are in bad shape, or healthcare costs are too high, or teachers are leaving the profession.

We cannot let hateful people tell you otherwise to scapegoat and deflect from the fact that they’re not doing anything to fix the real issues that impact people’s lives.

I know that hate will only win if people like me stand by and let it happen.

And I want to be very clear right now:

Call me whatever you want. I know who I am. I know what faith and service mean, and what it calls for in this moment.

We will not let hate win.

We can and will get into why Republicans are going all Q-Anon seeing “groomers” as their go-to 2022 Q-smear (death of irony notwithstanding) everywhere except where they actually exist, but right now, let’s just take a moment to absorb how deplorable the divisive hatred being aimed at all of our precious brothers and sisters who are not white-straight-Christian-men-of-wealth is.

There’s also the issue that way too much of this “groomer” business is projection on Republicans’ part — a sick projection that aims to deceive and cover up their own willful denial of accusations of sex crimes among higher ups in their party and refusal to even take any action to protect the vulnerable.

But you know what happens when you get into those facts? Post-Trump Teflon. Republicans are impervious to reality and facts, they have an entire apparatus built around avoiding both and raising money off of gruesome and destructive lies and character attacks so devoid of even a spark of truth as to be the embodiment of political shame.

McMorrow showed exactly how it’s done, because the values she espoused are the very ones many of us grew up with and were taught to respect. We all need to stand up when we witness hate. We cannot leave the marginalized to fight alone.