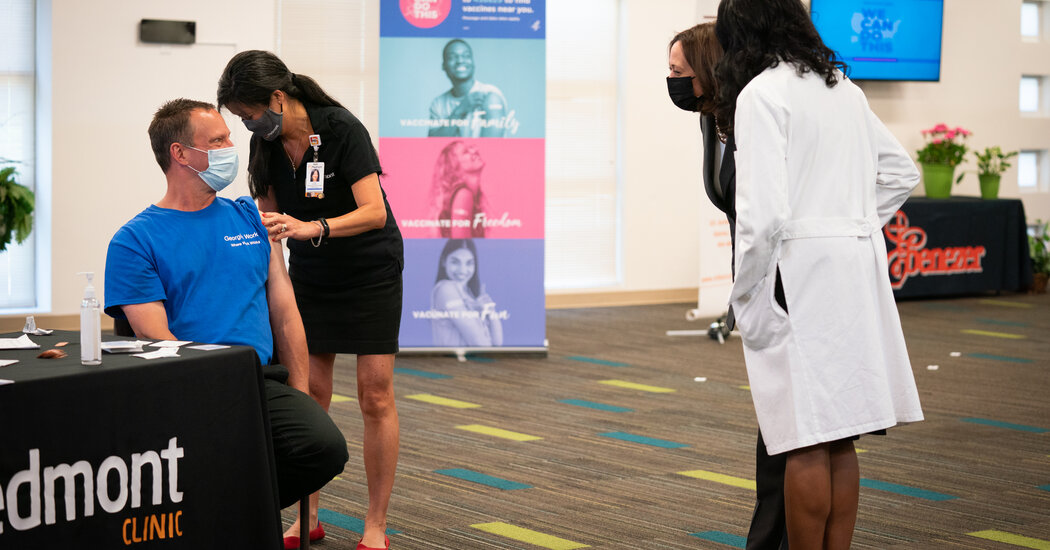 (Want to get this briefing by email? Here’s the sign-up.)

Here are the week’s top stories, and a look ahead.

1. The Delta variant is proving to be a stubborn hurdle in the fight against the coronavirus.

As the U.S. heads into its second pandemic summer, President Biden warned that those who fail to get vaccinated against Covid-19 risk becoming infected by “a variant that is more easily transmissible, potentially deadlier and particularly dangerous for young people.” Vice President Kamala Harris visited a vaccination center in Atlanta on Friday, above.

In Russia, the Delta variant is now the most prevalent version in Moscow, where case numbers have tripled over the past two weeks and city officials have added 5,000 beds to coronavirus wards. The outbreak has led to some vaccine mandates.

And in England, “freedom day,” when the last remaining coronavirus restrictions had been scheduled to end, was delayed until July 19 after a spike in Delta cases. Prime Minister Boris Johnson expressed confidence that the curbs would be lifted next month but added that “at a certain stage, we are going to have to learn to live with the virus and to manage it as best we can.”

2. Republicans are asserting more control over the voting process. Local Democratic election officials have been the first to go.

Across Georgia, members of at least 10 county election boards are being replaced, several of them Black Democrats like Lonnie Hollis, above. In Arkansas, election control has been stripped from county authorities. And in Kansas, Republicans overrode a veto from the Democratic governor to enact laws stripping the governor of the power to modify election law.

Democrats worry that proponents of Donald Trump’s conspiracy theories about the 2020 election will soon have much greater control over the election system.

Also out of Georgia: The college football legend Herschel Walker may be considering a bid to challenge Senator Raphael Warnock next year. Should he run, it could test Trump’s power as a kingmaker.

3. Iran’s hard-line judiciary chief, Ebrahim Raisi, was elected president. That may actually give President Biden an opportunity to restore the 2015 nuclear deal.

Many Iranians sat out the election, seeing it as rigged in Raisi’s favor. Raisi, 60, was favored by Iran’s supreme leader, Ayatollah Ali Khamenei. He has a record of grave human rights abuses and is currently under U.S. sanctions.

But U.S. negotiators say the next six weeks before Raisi is inaugurated may be a unique window to strike a deal with Iran on reviving the nuclear agreement, which Donald Trump ripped up three years ago. The theory in Washington and Tehran is that Ayatollah Khamenei has been stage-managing not only the election but the nuclear negotiations — and does not want to give up his best hope of lifting the crushing sanctions that have kept Iranian oil largely off the market.

4. The divergence of the conservative American Catholic church from Pope Francis has come into sharp focus.

On Friday, U.S. Catholic bishops decided to draft new guidance on communion that would deny President Biden the sacrament because of his support for abortion rights. The vote flouted a warning from the Vatican and was squarely aimed at Biden, above on Saturday, perhaps the most religiously observant president since Jimmy Carter. The bishops are expected to vote on a text in November.

But on Saturday, Pope Francis said nothing, church officials and experts said, because he remains confident that the American conservatives would never have enough votes to pass a doctrinal declaration on banning communion. Nonetheless, the pope’s allies worry that the rite of communion will be turned into a political weapon.

5. The blazing-hot job market is in part being fueled by two words: I quit.

According to the Labor Department, nearly four million people quit their jobs in April, the most on record. The dynamic has placed more power firmly in workers’ hands: With employers offering higher wages and incentives, like those offered by Waste Management, above, to combat the labor shortage, many workers — especially in low-wage positions in restaurants and hotels — are leaving their jobs and jumping to ones that pay even slightly more.

The pandemic has driven workers to quit for other reasons as well. People were able to save money and pay down their debts, giving them a cushion to leave jobs that left them dissatisfied. Other workers, disinclined to give up remote work, are abandoning jobs that are less flexible.

6. Secrecy has long been part of the art market. So have money laundering and other abuses.

Billions of dollars’ worth of art changes hands every year with little or no public scrutiny. Buyers typically have no idea where the work they are purchasing is coming from, and sellers are similarly in the dark. Some drug dealers have used this opacity to move money. Now the federal government is considering using a law designed to combat money laundering at financial institutions to further regulate the art market.

In other art world news, a reproduction of the original model for the Statue of Liberty, below, left France this month and will get to New York Harbor in time for Independence Day, just as some are asking whose freedom Lady Liberty celebrates.

In case you missed it: In The Times Magazine, our reporter Nicholas Casey chronicles the yearslong process of searching for his father, who vanished when Nicholas was 7 years old. “I spent much of my life imagining who I was — and then becoming that person — through vague clues about who my father was,” he writes.

8. “If you just sit quietly and mind your own business, Mother Nature will come to you.”

Gerald Stratford, a retired butcher and former Thames barge driver, joined Twitter because other big vegetable enthusiasts told him it was a place to discuss what they were growing. And then he and his not-so-ordinary garden in a tiny English village went viral (his nephew had to tell him what that meant). Over the past year, his honest and no-frills approach has been a welcomed antidote.

If you’re heading into the garden this weekend, our columnist offers some tips on how to avoid ticks. And our Well team has a complete guide to doing a proper tick check.

9. The summer grilling season is here.

Fire almost always makes vegetables taste better. The barbecue master Steven Raichlen recommends two methods: direct grilling, which is best for soft, moist vegetables, leafy ones and sliced ones; and indirect grilling, with the grill lid closed to capture the heat. This is the preferred method for large and firm vegetables.

For dessert, give sponge cake a chance. Its name doesn’t stir the heart, and it is often dry and tasteless, but done right, sponge cake is tender and bouncy and perfect for soaking up flavors from whatever it’s paired with. The Food contributor Claire Saffitz shared her tips for getting a sponge just right.

Happy summer solstice and enjoy the long days of summer.

Your Weekend Briefing is published Sundays at 6:30 a.m. Eastern.

Did a friend forward you the briefing? You can sign up here.

What did you like? What do you want to see here? Let us know at briefing@nytimes.com.