Defund the police: how a protest slogan triggered a policy debate 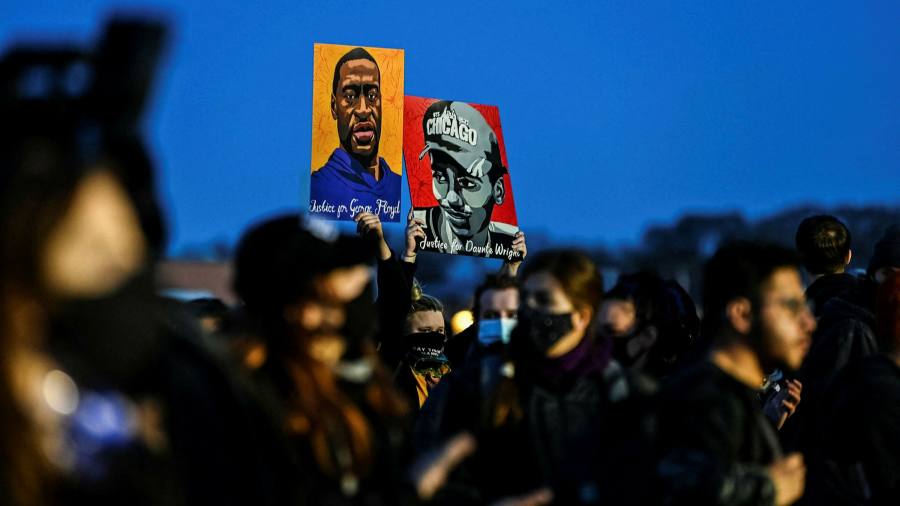 Eleven months ago “Defund the police” was a slogan that appeared on placards at protests; now it is being debated by American city councils.

Polls show only a small portion of Americans support the idea of defunding the police, a flexible phrase that can mean redirecting funds to social services or outright elimination of the department. Yet after the conviction of the officer accused of murdering George Floyd in Minneapolis, and in the wake of yet more deaths at the hands of police, what was previously a fringe concept has become part of mainstream US political discussion.

Austin, Texas cut its police budget in August by 35 per cent, with 5 per cent taking immediate effect. Seattle cut the police budget by 20 per cent in December. City councils have cut police budgets in nearly two dozen other cities, although mostly because the pandemic has battered municipal finances.

“People will look back at this year and say this was a real turning point,” said Alexander Weiss, a consultant who has advised police departments in Chicago and New Orleans, in reference to police accountability.

Floyd’s death last May set off protests around the world at the disproportionate number of people of colour killed by police. A key demand for many activists was to abolish police departments entirely, or cut their funding and redirect it to social services. In Minneapolis, nine city council members stood on a stage and pledged to defund the police. When Washington, DC Mayor Muriel Bowser ordered that the words “Black Lives Matter” be painted on a city street blocks from the White House, demonstrators used the same yellow paint to add: “Defund the Police”.

With more people killed by police in the past three weeks, the demands to defund have escalated. Chicago community organiser Rey Wences told non-profit news outlet Democracy Now! that following the killing of 13-year-old Adam Toledo last month by a Chicago police officer: “What we’re asking for is the same thing we’ve been asking for years . . . Defund the police and invest in our communities.”

In 2017, state and local governments around the US spent $115bn on police — some 4 per cent of state and local direct general expenditures — according to the Urban Institute. That share has stayed constant for the past four decades, even as the rising cost of healthcare means other big-ticket items, such as elementary education, now constitute a smaller portion of municipal budgets.

Most of the money is used to pay salaries and benefits to police officers, so cutting more than 15 per cent of a department’s budget often means cutting the size of the force, Weiss said.

Police officer pay has increased as police unions have grown in power and unions are some of the defunding movement’s most dedicated opponents. After Austin City Council in August voted to cut the police budget by $150m, the Texas Municipal Police Association put up a billboard outside the city, saying, “Warning!!! Austin Police Defunded Enter at Your Own Risk”.

Critics have warned that crime will rise if police budgets are cut. The number of homicides did rise in most US cities last year. Although the reasons are unclear, that increase seems to be unrelated to police budget cuts, which in most cases had not yet taken effect.

Some Democrats have been critical too. President Joe Biden said in a meeting with civil rights leaders that talk of defunding the police was how Republicans “beat the living hell out of us across the country” in the November elections.

Richard Auxier, a tax and budget expert at the Urban-Brookings Tax Policy Center, said that since police budgets were set by local governments: “there are literally thousands of them across the country, . . . and they all have their own politics”.

The politics have been particularly intense in Minneapolis. Three of the councillors who took the pledge in June backed away from it. The Minneapolis Charter Commission, a previously obscure body, killed an attempt last year by council members to place a proposal on the ballot that would replace the police department with a new public safety agency. The Minneapolis City Council launched a second attempt in January.

Activist Antonio Williams is a canvas director for the Yes 4 Minneapolis coalition, which is trying to land an initiative on the ballot that is similar to the city council’s. (A third group, Twin Cities Coalition for Justice 4 Jamar, also is pursuing a ballot initiative.) So far more than 20,000 residents have signed the Yes 4 Minneapolis petition.

Williams said some of the residents he had spoken to thought the petition’s language went too far, while others thought it did too little. He sees all those conversations as a first step in the process of persuading someone to sign, then to show up at the polls in November to support the initiative.

For him and other activists, the killings of Daunte Wright by a Brooklyn Center police officer, or of Toledo in Chicago, add no urgency to their cause, because it has always been urgent. But perhaps for some, the fact that Wright’s death occurred while former police officer Derek Chauvin was being tried for Floyd’s death, when the world was watching Minneapolis, underlines “a dire need for some change”.

“It’s going to continue to happen all over the country until policing as we know it and see it is done away with,” said Williams.

Certainly Floyd’s death “galvanised” the city’s residents on the issue of police misconduct, Williams said. He doubts the signature drive could have succeeded 11 months ago. “The conversation could have been had for sure, but the next step, the commitment, the action part of it?” he said. “I don’t see it happening.”

Rainbow Six Siege is free to try this weekend