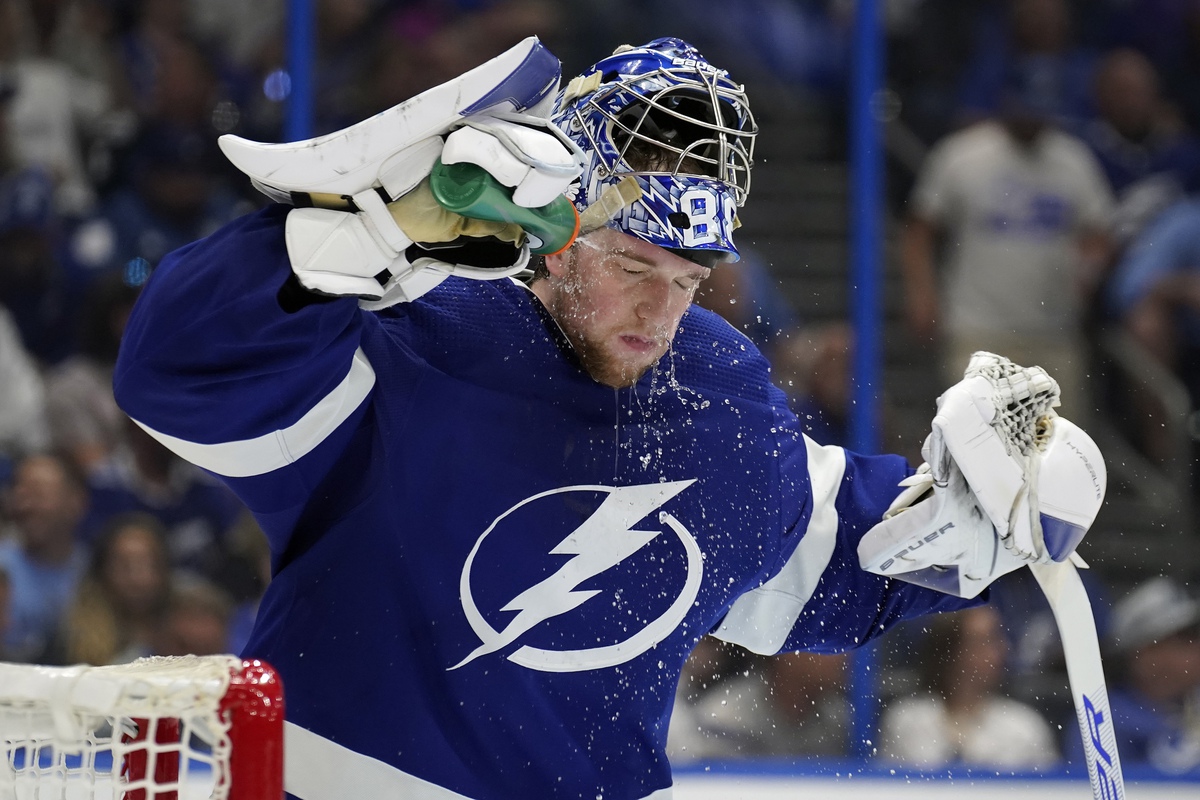 Tampa Bay Lightning goaltender Andrei Vasilevskiy (88) sprays water on his face during a timeout against the Florida Panthers during the third period Monday, May 23, 2022, in Tampa, Fla. (

TAMPA, Fla. — Jon Cooper had every reason to be confident the two-time defendin Stanley Cup champion Tampa Bay Lightning could keep their bid for a three-peat alive.

“Our story is not finished being written,” the coach said earlier this month with his team on the brink of elimination in the first round against the Toronto Maple Leafs. “We’ve got a lot left in us, we feel.”

Andrei Vasilevskiy is one of reasons.

The reigning Conn Smythe Trophy winner has won six straight games since the Lightning fell behind the Maple Leafs 3-2 in their opening round series, including a Game 7 gem in Toronto and a four-game sweep of the Florida Panthers in the Eastern Conference semifinals.

Up next is Tampa Bay’s sixth trip to the East finals in eight years, where they’ll face either the Carolina Hurricanes or New York Rangers.

“We’ve found a recipe that has obviously allowed us to go deep into the playoffs, and especially in the last 2 1/2 years now, and we want to keep it up,” captain Steven Stamkos said after Monday night’s 2-0 victory over Florida gave the Lightning its first sweep of a playoff series in 11 years.

“It’s the most fun and gut-wrenching and nerve-wracking time of the year, but that’s just an amazing feeling,” Stamkos added. “You can’t really describe it unless you go through it, and this group has certainly been through it.”

Vasilevskiy had 49 saves and posted the sixth shutout in his past seven series-clinching wins.

Since yielding three or more goals in each of Tampa Bay’s first six games against Toronto, he’s given up four total in the last five outings.

“It’s my job to just give our boys the chance to win, and I think we’ve done a pretty good job doing that the whole series,” Vasilevskiy said, playing down the way he’s played time and time again during his team’s championship run.

“Nothing special. I think it’s just the way the whole team is playing in those games. The whole series just constant blocked shots, sacrifices, and boys literally breaking bones to stop the puck,” the goaltender added. “Just such a great effort by everybody on our team. It’s obviously not just me. I’m just trying to do my job as best I can.”

Pat Maroon, chasing his fourth consecutive Stanley Cup title, snapped a scoreless tie a little over six minutes into the third period. Ondrej Palat added a empty-net goal with 22 seconds remaining for Lightning, who had two goals disallowed within a 48-second span of the second period.

The Lightning joined the New York Islanders and Montreal Canadiens as the only franchises to win at least 10 consecutive playoff series. Maroon, who won with St. Louis in 2019 before signing with Tampa Bay two years ago, has been a part of 14 consecutive series wins.

“I’m fortunate to play with two really good teams the last few years, but this team has been very impressive,” Maroon said.

“The way we compete. The way we stick in there every every game, we’re never out of it. … It’s been tremendous to watch what we’ve been through the last few years,” Maroon added, “and it’s unbelievable to be a part of it.”

Two more series wins, and the Lightning will become the first team to win three consecutive Stanley Cup titles since the Islanders claimed four in a row from 1980-83.

“It’s impressive. I know, Coop mentioned that, and then Patty has 14. So he’s got the one up, but it’s special to be a part of this group,” Killorn added. “Like I said, with Vassy. I think there’s a lot of players on this team that will go down as some pretty good players, Hall of Fame players. So I’m just happy to be a part of it, to be honest.”