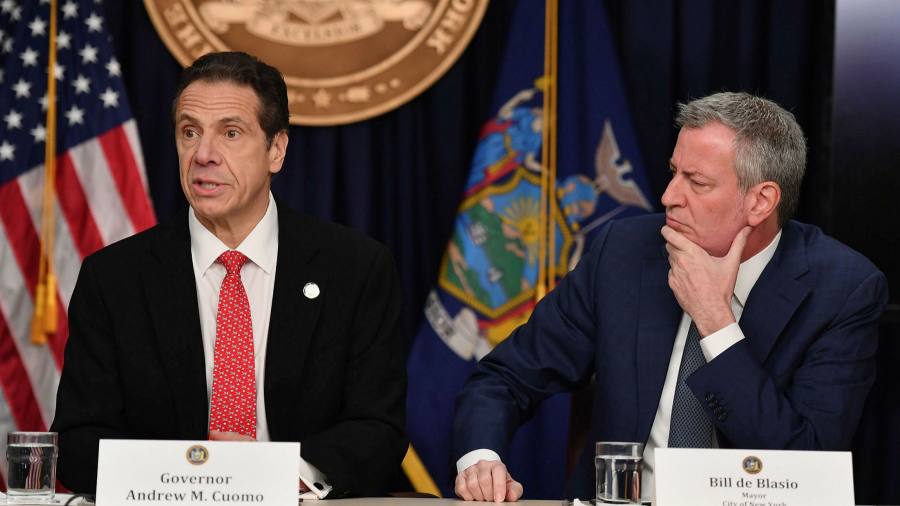 “It is disgusting to me. And he can no longer serve as governor. It’s as simple as that,” said De Blasio, who has enjoyed a uniquely tempestuous relationship with Cuomo, on Thursday.

He was responding to a report in the Albany Times Union newspaper claiming that the governor had summoned a young female employee to his mansion and then aggressively groped her under her blouse.

As accusations of sexual harassment and unwanted advances have piled up in recent weeks, Cuomo has apologised for “whatever pain I caused” but insisted he had never touched anyone inappropriately and would not resign.

Cuomo had, until recently, been regarded as a shoo-in to win a fourth term next year. Debate is now swirling about whether he will even finish the current one.

In addition to the sexual harassment claims, Cuomo is under siege for his handling of the state’s nursing homes during the pandemic.

His administration undercounted nursing home fatalities linked to Covid, according to the attorney-general, after issuing a controversial order last April requiring care homes to accept coronavirus patients discharged from hospitals.

Cuomo has said the order was issued to protect hospitals from being overwhelmed in the early days of the pandemic, and that discrepancies with the nursing home fatalities were simply a matter of accounting.

But state legislators, including fellow Democrats, have accused him of rebuffing their requests for data about care homes to protect his political reputation.

The publisher of Cuomo’s recently published book — American Crisis: Leadership Lessons from the Covid-19 Pandemic — has stopped promoting the title due to the nursing home investigation and has no plans to reprint it or issue it in paperback, according to a statement from Crown Publishing Group in the New York Times.

Cuomo, a centrist, and De Blasio, a progressive, are both Democrats but also bitter rivals whose feuds have been exacerbated by the challenges of the pandemic. Although De Blasio once worked for Cuomo at the federal housing department, the two have clashed repeatedly over issues such as school closures and restaurant reopenings.

Even when their policy views were aligned, the governor often made a point of reminding the mayor of his greater authority. Behind the scenes, their staffs have clashed over Covid-19 testing and other public health measures.

Cuomo has enjoyed the upper hand in the Albany-New York City rivalry — even more so after he gained national acclaim for his early handling of the pandemic. But as he has become vulnerable, De Blasio has taken the opportunity to bait him — even allowing speculation he might challenge the governor when his term ends.

Last month, De Blasio publicly backed the claims of a state assemblyman, Ron Kim, who said Cuomo had threatened to “destroy” him for criticising his nursing home policies. “It’s a sad thing to say . . . but that’s classic Andrew Cuomo,” the mayor said, adding: “The bullying is nothing new.”