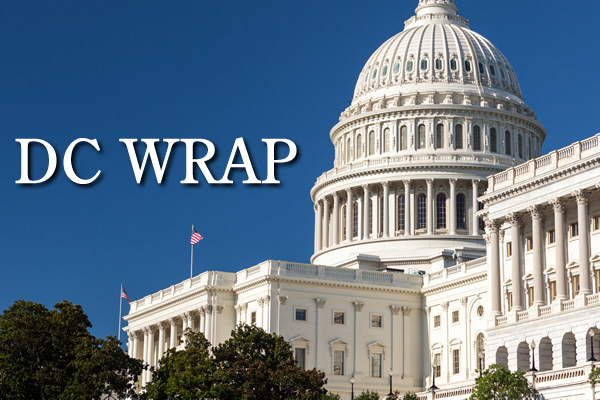 Welcome to our weekly DC Wrap, where we write about Wisconsin’s congressional delegation. Sign up here to receive the newsletter directly: https://forms.gle/YLYZtJWHPSt24HhZ7

Quotes of the week

“Jan 6 committee uncovered texts that Sen. Ron Johnson wanted to assist in the fake elector scheme to destroy our democracy. Sadly, I’m not shocked; it’s clear that he has never been as interested in helping WI as he is w/amplifying conspiracies & representing the radical fringe.”
– U.S. Rep. Gwen Moore, D-Milwaukee, in a tweet responding to evidence U.S. Sen. Ron Johnson’s staff wanted to hand-deliver an alternate slate of electors from Michigan and Wisconsin to former Vice President Mike Pence.

“I had no involvement in an alternate slate of electors. I had no idea this’d even be delivered to us, got delivered staff to staff. My chief of staff did the right thing, contacted the Vice President’s staff. They said they didn’t want it so we didn’t deliver it.”
– Johnson in a CNN video saying a staff intern delivered the slate of fake electors and the issue is a “non-story.”

— Johnson denies involvement in his office attempting to deliver a slate of alternate GOP electors to Pence.

Johnson Chief of Staff Sean Riley wanted to hand-deliver to Pence slates of alternate electors for Michigan and Wisconsin in the 2020 election, according to text messages the Jan. 6 Committee revealed Tuesday.

In 2020, 10 Republicans in Wisconsin — along with Republicans in six other states — submitted an alternate slate of electoral votes in favor of Donald Trump despite President Joe Biden’s victory.

The messages show a discussion between Riley and Pence aide Chris Hodgson about delivering the electors:

“What is it?” Hodgson replied.

“Alternate slate of electors for MI and WI because archivist didn’t receive them,” Riley said.

“Do not give that to him,” Hodgson responded.

Johnson spokeswoman Alexa Henning on Twitter said Johnson had “no involvement in the creation of an alternate slate of electors” and had “no foreknowledge” that the electors would be delivered to his office. Henning said Riley contacted Pence’s office.

“The Vice President’s office said not to give it to him and we did not. There was no further action taken,” Henning said. “End of story.”

Johnson said he personally had nothing to do with his staffer attempting to deliver a slate of fake electors to Pence.

The Oshkosh Republican told CNN’s Manu Raju a House intern delivered a package to his office meant for Pence. Riley, who is also a former Trump campaign staffer, then texted one of Pence’s staff asking if he should deliver a slate of fake electors.

“Again, I wasn’t involved, I don’t know what they said, but somebody from the House delivered it to a staff member in my office,” Johnson said. “My chief of staff called the vice president: ‘hey we got this,’ and the vice president said ‘don’t deliver it,’ and we didn’t.”

“Trying to deliver fake electors to Vice President Pence on #January6th is direct support for Trump’s conspiracy to overturn the will of the people in Wisconsin,” the U.S. Sen. Tammy Baldwin, D-Madison, said in a tweet.

In response to an article saying Johnson did not know the alternate electors would be delivered to his office, U.S. Rep. Mark Pocan questioned if Johnson was condemning the false claim that Trump won the 2020 election.

“Is this @SenRonJohnson’s way of finally condemning the Big Lie, Trump’s role in advancing it, and asking for the prosecution of fake electors? Asking for a state,” the Town of Vermont Dem tweeted.

In a 64-34 vote that included Senate Minority Leader Mitch McConnell, R-Ky., in favor, the Senate moved toward a debate on the Bipartisan Safer Communities Act. The measure would provide grants to states willing to include juvenile records in the National Instant Criminal Background Check system used for gun background checks.

U.S. Sen. Tammy Baldwin, D-Madison, in a tweet said she’s proud to support the legislation aimed at reducing gun violence, moving the Senate “from doing nothing for 30 years to doing something.”

“This is a positive step forward to help save lives,” she said.

Johnson voted against the measure and told WisPolitics.com in an emailed statement he takes issue with the incentives for red flag laws.

“This bill provides resources to states to adopt red flag laws without requiring sufficient due process to those accused – thereby eroding 2nd amendment protections,” he said. “I simply cannot support it.”

— U.S. Rep. Mark Pocan praised the House’s passage of a measure that would expand protections against those who wish to harm president’s spouses to more than just wives and widows.

The Town of Vermont Dem in a floor speech ahead of the voice vote said change is long overdue to offer protections for family members of future presidents who may have spouses who are not straight women. The measure would change language defining which presidential family members are protected from threats by law. Pocan said it’s critical to change the language to prepare for possible future leaders.

“Some day there could be a President Kamala Harris, or Elizabeth Warren, or Amy Klobuchar, or Tammy Baldwin, or Pete Buttigieg; or President Nikki Haley, or Kristi Noem, or Liz Cheney,” he said. “The words in law matter. It is critically important that federal law recognizes that we could one day have a president who is not a man, or even a straight man, and that they and their families deserve equal protections under the law.”

Current language only offers protections against those who wish to commit bodily harm to a president’s wife or widow. The proposed measure would replace wife or widow with spouse.

— Baldwin and a bipartisan group of lawmakers are introducing legislation to reauthorize a cancer early detection program.

The Screening for Communities to Receive Early and Equitable Needed Services for Cancer Act would reauthorize the National Breast and Cervical Cancer Early Detection Program. The NBCCEDP is a program that provides breast and cervical cancer screening and diagnostic services for women who are low-income, uninsured, and underinsured who do not qualify for Medicaid.

“Cancer plagues every corner of the country, but with proper screening and treatment, lives can be saved and families can continue to be whole,” the Madison Dem said in a release. “The NBCCEDP has a proven track record of providing preventative and diagnostic cancer services nationwide, saving patients and taxpayers money, and most importantly, saving lives.”

The NBCCEDP is a partnership between the CDC and state departments of health. This program has provided breast and cervical cancer screening and diagnostic services to more than 6 million women, detecting nearly 75,000 breast cancers and almost 4,000 premalignant breast lesions.

— Two Dem-aligned groups announced they are boosting their TV buys in Wisconsin’s U.S. Senate race by more than $6.8 million.

Senate Majority PAC had previously announced a $12 million commitment to the state. It is now adding $3.4 million to that buy.

Meanwhile, the 501(c)(4) Majority Forward is adding more than $3.4 million to its Wisconsin buy in addition to the $2.2 million already placed.

Combined, the two are now planning to spend more than $21 million in Wisconsin.

It’s the latest sign of the huge amounts of money expected to pour into Wisconsin for this fall’s U.S. Senate race. The National Republican Senatorial Committee has reserved $9 million in ads with another $2.6 million in hybrid ads with U.S. Sen. Ron Johnson’s campaign. Meanwhile, One Nation, a GOP-aligned group, has announced nearly $9 million in issue ads for Wisconsin.

The latest boost from Senate Majority PAC and Majority Forward is part of an additional $38 million the two groups are putting into six states: Arizona, Georgia, Nevada, New Hampshire, Pennsylvania, and Wisconsin. The first four are Dem held seats, while Pennsylvania’s seat is open after Republican Pat Toomey decided against seeking reelection.

The groups said they also will continue to book online and digital ads in addition to the TV spots.

The narrator in the 30-second video that’s part of a seven figure ad campaign airing on TV stations and digital platforms statewide says commodity prices are increasing and “we’re all paying the price for Biden’s massive deficit spending.”

“Ron Johnson has the courage to say no to spending that is mortgaging our children’s future,” the narrator continues.

See the release and ad.

Posts of the week

Who or what’s to blame for high gas prices? Sen. Johnson and Sen. Baldwin weigh in

There are 8 House races in Wisconsin, and Democrats aren’t even competing in two of them