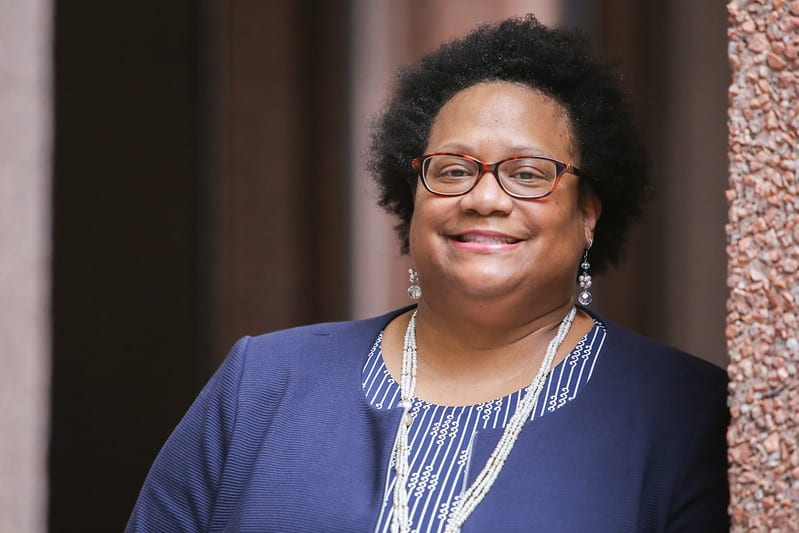 “Dawn Jones represents many things that would have delighted my father if he were here,” said Ben F. Johnson III. “First, she is a graduate of this law school. Second, one of the great aims of my father in starting this school was developing an endeavor that provides professional educational opportunities for students trying to balance an education with working other jobs, which Dawn did. And third, the total focus and commitment she has that led her to becoming the 58th president of the State Bar of Georgia. Each of these items would make my father very proud.”

Jones’ passion for helping people began in the healthcare field before she became an attorney. She worked in the ICU as a critical care registered nurse for 14 years, which continued while she attended Georgia State Law as a part-time student. Jones incorporated her medical training and knowledge into her legal practice, and at one point she held the position of associate general counsel for Grady Health System.

“I think of Dawn as a servant leader, a selfless, generous and compassionate individual,” said College of Law Dean LaVonda Reed, who attended the University of Virginia at the same time as Jones. “I knew this from the time we met in 1986 and she has continued to demonstrate consistent leadership to the present.”

Jones is now a managing partner at The Firm of Dawn M. Jones, LLC. She also remains highly active in local bar, state bar and non-profit activities. Jones served as president of the Georgia Association of Black Women Attorneys (GABWA) and the State Bar of Georgia.

Colleagues spoke about her commitment to helping law students succeed, highlighting a two-day retreat for Black law students Jones created through her work on the Atlanta Bar Association Student Outreach committee. To date, she’s organized 12 of these retreats.

“One thing we know is, the more exposure a law student from an underrepresented group has to a positive experience with the law, the greater likelihood that he or she will succeed in the legal field,” said Charlotte Combre (J.D. ’97), a partner at BakerHostetler. “With the Black law student retreat, Dawn makes sure we’re providing that guidance to these law students.”

Jones is one of four Georgia State Law alumni to earn this high honor. She credits her success in public service with the support of those around her.

“This honor being the highest honor that Georgia State University College of Law gives, is overwhelming,” said Jones. “People talk about what I’ve done, but I’ve not done it alone. The reason these programs are successful is because there are volunteers that step up and answer the call.”

The Ben F. Johnson Jr. Public Service Award is presented each year to a Georgia attorney whose overall accomplishments reflect the high tradition of selfless public service that our founding dean, Ben F. Johnson Jr., exemplified during his career and life. A committee of faculty, alumni and other legal professionals select the recipient each year.