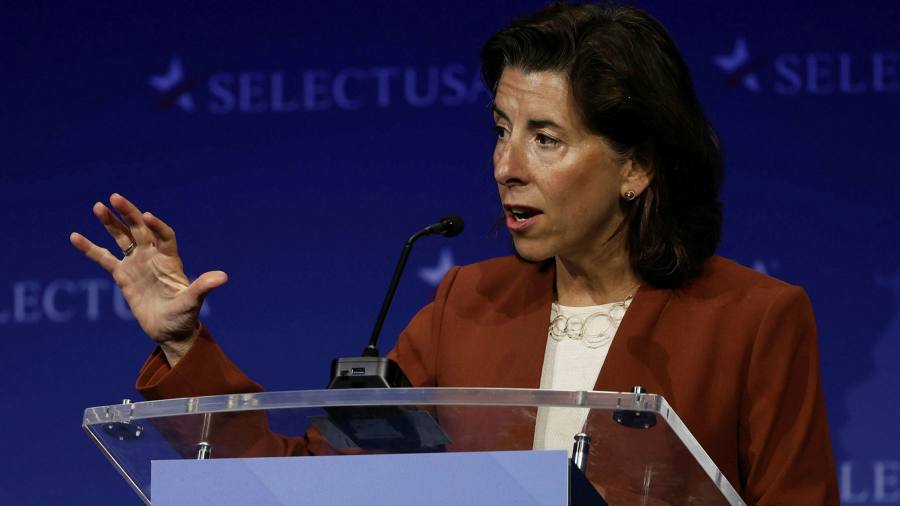 US commerce secretary Gina Raimondo conceded that removing US tariffs on Chinese goods would not ease inflation in a “very significant way”, underscoring the White House’s struggle to devise an effective plan to fight high prices.

The senior administration official on Sunday still lent her support to the move, on which President Joe Biden is due to decide soon. But she emphasised that its impact would probably be limited given the multitude of factors pushing up prices.

“Lifting tariffs isn’t going to bring down top-line inflation in a very significant way,” she said in an interview with NBC on Sunday. “What it will do potentially is help consumers on certain . . . household goods. And so for that reason, given where inflation is, I think it could make sense to do it.”

Biden has repeatedly stressed that counteracting inflation, which is running at the fastest pace in four decades, is his administration’s number-one priority, a message Raimondo reiterated on Sunday. Beyond removing Chinese tariffs, the president has also discussed a move to cancel some student loans and last month proposed a petrol tax holiday.

Economists warn that many of these efforts to provide relief to households and businesses suffering from much higher costs either will have minimal effect or could in some cases make the problem worse.

The White House is seeking to ease supply-related constraints as well, which have contributed in large part to the inflation surge since the onset of the pandemic. Prolonged Covid lockdowns in China have gummed up one of the world’s largest manufacturing hubs, while Russia’s invasion of Ukraine has caused spikes in the costs of energy, food and other essential commodities.

In an interview with ABC on Sunday, Raimondo said it was essential for Congress to pass a bipartisan bill designed to increase the domestic supply of semiconductors, an industry that has suffered globally from severe shortages that have pushed up the price of vehicles and other industrial electronics.

“We have inflation now because of lack of supply,” said Raimondo, calling the bill a “perfect example” of how to bolster capacity.

The president is also headed to Saudi Arabia this week with an aim of resetting relations with a country he once called a pariah state. In an article published on Saturday, Biden lauded the kingdom for helping “stabilise oil markets with other Opec producers”.

Energy prices have plummeted in recent weeks as fears of an impending recession have mounted following clear signs from the Federal Reserve that it will aggressively raise interest rates to a level that begins to constrain economic activity in order to restore price stability.

Raimondo on Sunday characterised the Fed’s actions as “strong”, adding that the administration is “doing everything we know how to do” to root out inflation.