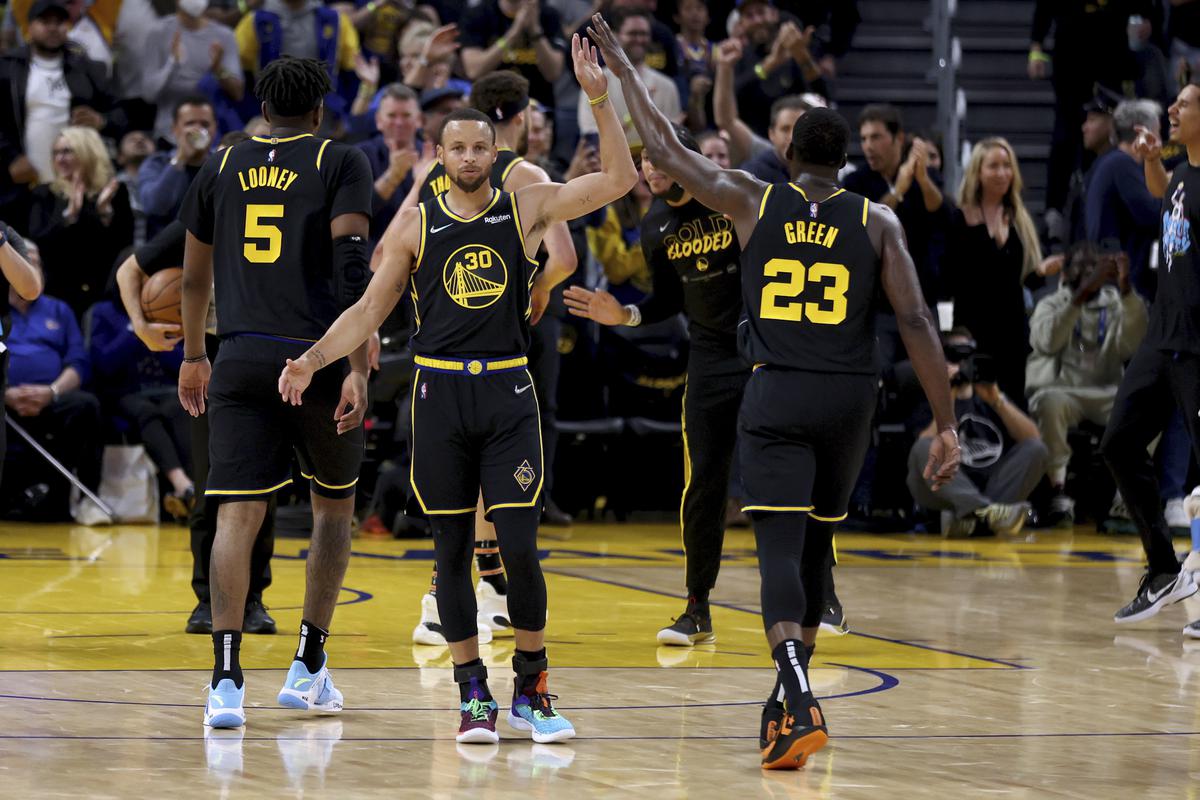 Golden State Warriors guard Stephen Curry (30) is congratulated by Draymond Green during a timeout in the first half of Game 5 against the Denver Nuggets in San Francisco, Wednesday, April 27, 2022.

SAN FRANCISCO — Stephen Curry scored 30 points in his return to Golden State’s starting lineup and the Warriors beat Nikola Jokic and the Denver Nuggets 102-98 on Wednesday night to end the first-round series in five games.

Curry converted a three-point play with 1:33 left and scored again with 29 seconds remaining to help send the Warriors on to the second round in the Western Conference.

Jokic scored 12 of his 30 points in the final 3:46 and finished with 19 rebounds and eight assists.

The Warriors advanced to play the winner of the Memphis-Minnesota, with the Grizzlies up 3-2 going into Game 6 on Friday night in Minneapolis. Memphis eliminated Golden State in the play-in round last year.

Jokic tied it at 90 on an 18-footer with 2:26 remaining before Golden State’s Gary Payton II made a layup moments later. Payton also hit a go-ahead 3-pointer from the baseline corner in front of Denver’s bench with 6:57 left to put Golden State up 86-84 and finished with 15.

Jokic converted two free throws with 3:46 left after Draymond Green’s foul the Golden State defensive star wanted called on the 7-footer. Jokic wound up 12 for 18 from the floor. DeMarcus Cousins added 19 points off the bench against his former Golden State team, and Aaron Gordon had 15 points and nine rebounds.

Curry shot 10 of 22 with five 3-pointers. He came off the bench the first four games with the series beginning one month from when he sprained a ligament in his left foot March 16 against Boston.

Kerr challenged the Warriors to “get back to being us.” They had given up 30 points off 15 turnovers and committed 27 fouls that led to 36 free throws for Denver in a 126-121 road loss Sunday.

Green had 11 points and six assists. His three blocked shots moved him past Kevin Garnett for 22nd on the NBA’s career postseason blocks list.

Nuggets: Austin Rivers exited late in the first with tightness in his right hamstring. … Denver shot 3 of 14 from deep in the first half and 6 for 29 overall. … Jokic had 10 rebounds in his initial 11 minutes.