Cuba emphasises continuity as it exits the Castro era 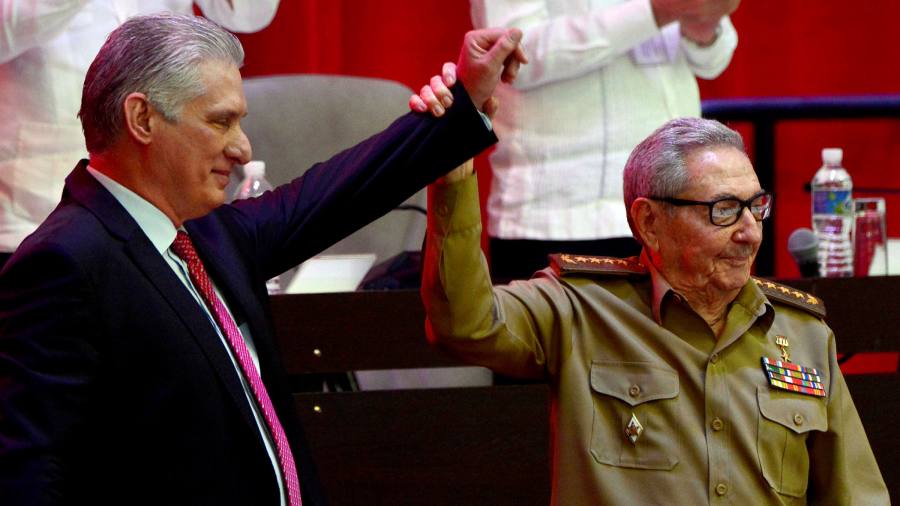 The Castro era in Cuba came to a carefully choreographed end on Monday, as President Miguel Díaz-Canel was elected head of the ruling Communist party, replacing the retiring leader, 89-year-old Raúl Castro.

The reshuffle in the top ranks also saw the departure from the politburo of the final survivors of the 1959 revolution that brought brothers Fidel and Raúl Castro to power. For those hoping for a significant shift in policy, however, there was little to cheer about.

The changes came at a four-day party congress held largely behind closed doors under the banner of “Unity and Continuity”. During the proceedings, many dissidents found their phone and internet service was cut, and they were not allowed to leave their homes, making it all but impossible to comment.

Among those promoted to the politburo was Brigadier-General Luis Alberto Rodríguez López-Callejas, once married to Raúl’s daughter Deborah and head of the armed forces’ civilian holding company, GAISA, which controls important swaths of the economy such as tourism and the retail trade.

Rodríguez López-Callejas is close to Díaz-Canel, who has referred to him as his economic adviser, according to two European diplomats. He is also a competent businessman, according to three foreign counterparts who have worked with him.

“He comes by early in the morning once a week to check on everything and tour the place,” said one manager at the Mariel Special Development Zone just outside Havana, requesting anonymity.

He is already under sanctions imposed by the Trump administration. The appointment of Díaz-Canel will anger hardline Cuban exiles in the US and is unlikely to please the Biden administration, which has already signalled that it does not plan any overtures towards Havana in the near term.

As part of its tightening of restrictions on Cuba, the Trump administration placed sanctions on nearly all military-run companies on the island from hotels to financial services. The Biden administration has given no indication that it plans to lift these.

Monday’s appointment consolidates the power of Díaz-Canel, who has risen steadily through the ranks of Cuba’s bureaucracy with a reputation as a capable but cautious leader focused on economic reform. His Twitter account is peppered with the hashtag #SomosContinuidad (We are continuity).

Raúl Castro said upon stepping down at the weekend that “as long as I live, I will be ready with my feet in the stirrups to defend the motherland, the revolution and socialism with more force than ever”, a remark taken to indicate his continued involvement.

Díaz-Canel confirmed this on Monday, saying his mentor “will be consulted about strategic decisions”. Raúl Castro has been effectively running the country since his ailing brother Fidel handed power to him in 2006. Fidel Castro died in 2016.

One of the new leadership’s first orders of business will be to conduct a nationwide discussion of Raúl Castro’s last central committee report, in which he doubled down on existing foreign policy, the need for a single-party system and cautious market reforms to avoid “a restoration of capitalism and dependence on the United States”.

Nevertheless, many analysts believe the crisis that has led to widespread food shortages and long queues in shops for basic necessities will push forward economic reforms, particularly now that younger generations hold almost all positions.

“A new cohort of leaders will have a much freer hand to implement policies permitting a gradual turn to a more market-driven economy,” said Brian Latell, a former CIA Cuba analyst who followed the Castros for decades.

For example, Raúl Castro in the report castigated party members for their reticence to fully support the integration of small- and medium-sized private business into the national economy, while simultaneously drawing a red line over the extent of changes.

He said allowing private businesses to engage in foreign trade without going through the state was unacceptable.

“There are limits that we cannot exceed because the consequences . . . would lead to . . . the very destruction of socialism and therefore of national sovereignty and independence.”

Similar words were uttered before just about every reform undertaken over the past decade, signalling that serious resistance remains in the ranks.

The party congress spent a great deal of its time on the need to improve cadres and strengthen ideological work as the internet smashes its information monopoly at a time of crisis and destabilising monetary reforms. Opposition to the system was characterised as part of a US plot.

Bert Hoffmann, a Latin America expert at the German Institute of Global and Area Studies, said Cuba’s old guard might remain influential behind the scenes, particularly in the military. He added: “To weather the current crisis, further economic policy change will be imperative for Cuba.”

Archegos employees face losing up to $500m in deferred bonuses

America the beautiful: a look at some of the country’s most fascinating animals | Stories