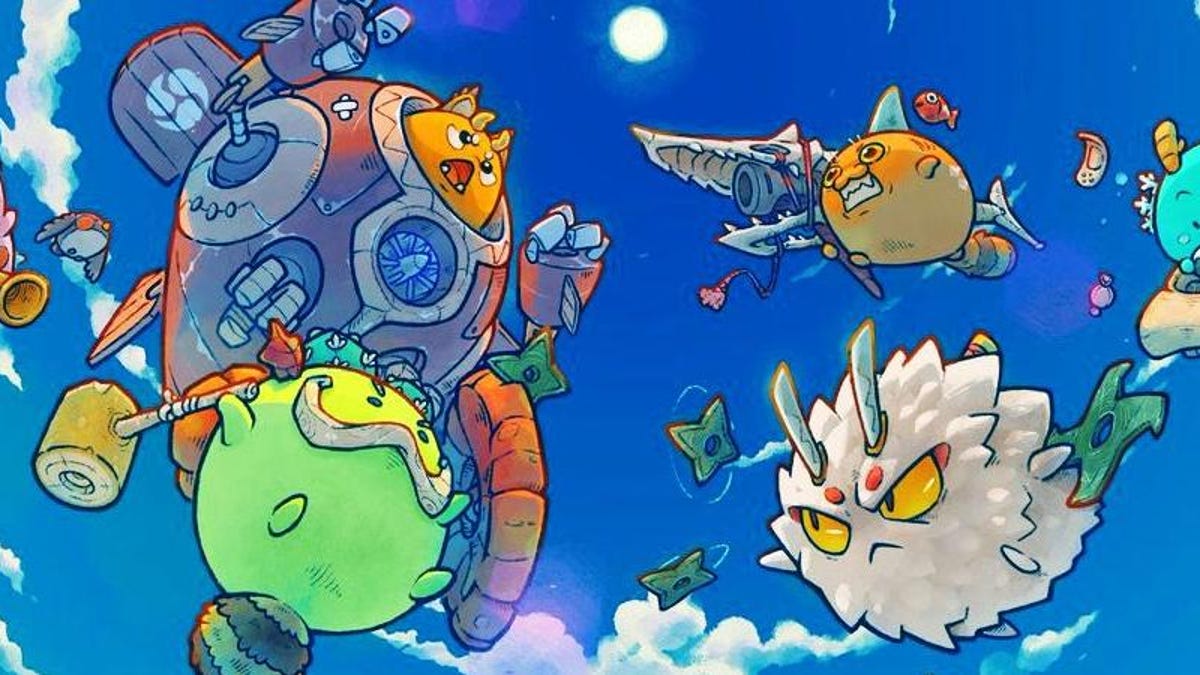 Axie Infinity is the crypto-backed Pokémon clone in which cute little creatures that double as NFTs battle for fun and profit. It’s also a pyramid scheme that relies on cheap labor from countries like the Philippines to fuel its growth. Now, fictional inflation, combined with a historic crypto heist allegedly committed by North Korea, have plunged the Axie economy into chaos, and its high rollers are freaking out as the ones below them bail on the scam.

Like all things crypto, the story of Axie Infinity is at once very complicated and incredibly simple. Developed by Sky Mavis, the game revolves around collecting, breeding, and battling cartoon characters called Axies, which are NFTs that exist on the Ethereum blockchain. Players can use their Axies to farm a currency called Smooth Love Potion (SLP) which is used to breed and create more Axies. Both the Axies and SLP can be sold on the open market for real money.

As Vice reports, the result is a highly financialized community fueled by the promise of future riches and predicated on a constant influx of new players. Many of those new players can’t afford to buy Axies directly, so existing owners loan them out for a cut of future earnings. The Axie community charitably calls the bosses “managers,” the workers “scholars,” and the overall arrangement a “guild.” Because many of the low-level players are poor workers from the Philippines and elsewhere, others call this arrangement digital colonialism.

The whole thing is reminiscent of old-school gold farming in MMOs like World of Warcraft. As The Verge points out, it’s also been very profitable for Sky Mavis, but relies on keeping the dream of future growth alive since there’s little of intrinsic worth in the game itself. That dream recently began to unravel thanks to gameplay changes and SLP inflation, and then last month the game got hacked to the tune of over $600 million in one of the biggest crypto heists in history. Axie Infinity’s fragile capitalist caste system has continued spiraling ever since.

“The Axie Infinity devs’ mentions are full of digital landlords pissed that their “scholars” (Filipino employees being paid in game scrip) are all quitting the game and no-showing their weekly quotas,” YouTuber Dan Olson tweeted on April 12. As noted by GamesRadar, a quick search of Twitter and Reddit shows players complaining about the state of the game and lack of cheap labor to sustain their investment.

“A busy day at work finally [ends] and it is nice to see $SLP going up slowly,” wrote one. “But then I had a few scholars quit on me last week so time to look for new axie scholars again I guess.”

“I had a fish farm and a plant farm. And 10 scholars,” wrote another. “They have almost all quit. My Axies are worth 10% of what they cost me to breed. I learned a lot in Axie.”

Axie Infinity is, among other things, a live-service game, and it turns out even the crypto bros have as much trouble balancing resource economies and character progressions as everyone else. The proliferation of Axies led to the farming of more SLP, and as result the value of SLP started to tank. Currently, the only thing that removes SLP from the game is breeding Axies. To address this, Sky Mavis removed SLP farming from Adventure mode in February, but instead of the supply of SLP contracting, it continued to go up. Players are now calling for new ways to “burn” SLP and stop runaway inflation.

The implementation of player-owned in-game land, also referred to as Project K, has been another big sore spot. Sky Mavis began selling parcels years ago, but the gameplay mechanic is still under construction, and the developer announced more delays this week. Originally set to launch in early 2020, Project K was later pushed to 2021, and now still only has a generic release window of 2022.

“The people who bought Land early basically locked up their assets in a zero return situation when there’s a lot of other things they could’ve done with that money, all because Sky Mavis kept telling us Q4 2021 was going to be the release date and now they seem to be treating current Land owners as an afterthought,” wrote one player on the subreddit.

Other players are now debating whether to get out or hold on to see if Axie Infinity’s economy bounces back. “Lets be real for a second, we are all here because of the earning potential,” wrote one player. “And to discuss this otherwise is wasting time. I’m holding all my axies. I don’t care if it hits zero but i won’t sell for those prices now.”

In the meantime, Sky Mavis is trying to patch the $600 million hole in its pocket left by hackers. According to the FBI, the North Korea-based Lazarus Group was responsible for the breach. The U.S. Treasury added the blockchain address where the funds were deposited to the North Korea sanctions list on Thursday, but Bloomberg reports the funds could take years to recover, if they’re recovered at all. It’s okay though, a bunch of crypto and VC firms just announced they would give Sky Mavis another $150 million to help reimburse players and keep them from searching for a new grift.