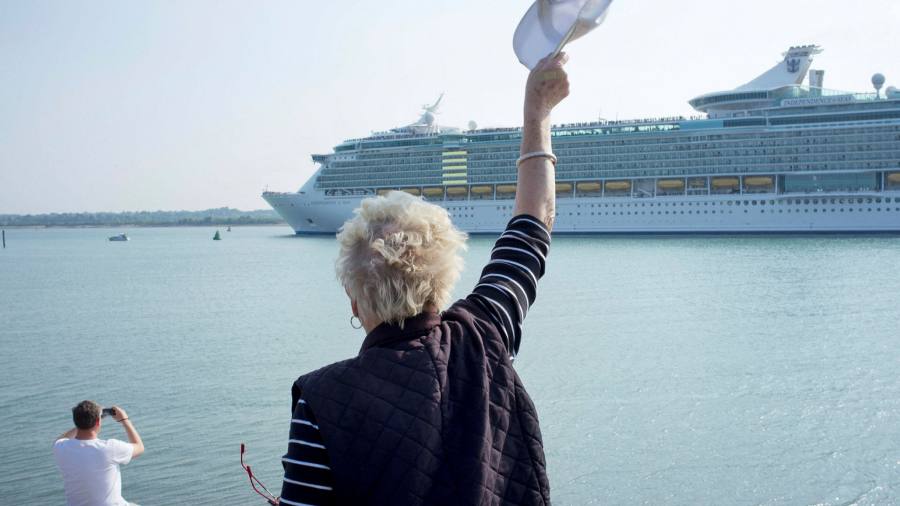 Royal Caribbean’s disclosure this week of a $1bn loss for the fourth consecutive quarter marked the end of a gloomy year since a Covid outbreak on board the Diamond Princess cruise ship brought the industry to a standstill.

But investors finally found cause for celebration, pushing the company’s share price up almost 12 per cent as it revealed a bump in bookings spurred by fresh confidence around vaccines and lockdown easing.

“Despite the lack of marketing spend, we have seen a 30 per cent increase in new bookings since the beginning of the year when compared to November and December,” Jason Liberty, Royal Caribbean’s chief financial officer, told analysts. “We feel very optimistic about the future.”

Another leading cruise line said its UK bookings leapt 300 per cent following the government’s announcement of reopening dates for hospitality and travel this week, albeit from a low base.

One day after Royal Caribbean announced its results, rival operator Carnival, whose brands make up about 40 per cent of the sector, said it was undertaking a $1bn share issue to raise more funds.

During the initial period of lockdowns, cruise operators had hoped to be sailing by the end of 2020. The biggest lines poured hundreds of thousands of dollars into protocols aimed at limiting the virus’ spread on a scant few cruises last autumn, but the rise of more virulent strains has once again forced their ships to anchor.

Greek tourism minister Harry Theocharis told the Financial Times he was “100 per cent” sure cruising could restart in Greek waters from May. Authorities in the US, which accounts for more than half of cruise passengers, are more tentative — with demands including on board laboratory testing facilities — although there is some hope the Biden administration will speed up the process of regulation.

“The CDC [Centers for Disease Control and Prevention] are making it very difficult and putting a lot of requirements on cruise operators to operate out of the US,” said Nigel Thomas, chairman and maritime partner at the law firm Watson Farley & Williams. “For Carnival and Royal Caribbean [cruising] out of US ports is their single biggest market by far . . . There is frustration but they know they have to get it right.”

Vaccinations for guests are viewed by some operators as the enabler for a restart. Saga Cruises in the UK and American Queen Steamboat and Victory Cruise in the US have stipulated that their passengers must be fully vaccinated before embarking.

But the larger companies, which have a far broader demographic of customers, are more wary.

“I think there is the potential that if you and I are on a cruise I would probably feel better if you were vaccinated,” said Bill Burke, chief maritime officer at Carnival. “[But] would we put a policy in place that says everyone has to be vaccinated? Maybe but not tomorrow.”

Norwegian Cruise Lines, the third largest operator, said last month that it planned to require vaccinations for its crew, while Richard Fain, chief executive of Royal Caribbean, said vaccines were the “ultimate weapon” but added it was too early to demand them on board.

In the meantime, operators hope a broad set of measures, including multiple tests for guests on ships and before the trip, UV air filtration, additional medical facilities, cuts in capacity and contactless apps for ordering food will be enough to persuade authorities that cruises are safe.

On Tui Cruises, which have continued to operate around the Baltic and Canary Islands since July last year, entertainment now comprises solo acts only and the buffet has been cancelled.

“It may be astonishing for many people that we are cruising,” said Wybcke Meier, chief executive of Tui Cruises. But, she added, “we have a lot of regular customers. We have some people who have stayed on board for five weeks because they would rather be in the Canary Islands than a German city in winter.”

But even with a steady flow of customers, ships are only running at 30 to 50 per cent of usual capacity meaning that voyages just break even, Meier said.

For large operators a period of constrained capacity and low revenues poses another challenge as cruising opens up. The three largest listed operators have raised almost $40bn in debt and equity since March, leaving them with hefty deficits to pay back.

Jamie Rollo, an analyst at Morgan Stanley, noted that he expected the industry to return to 2019 profit levels in 2023 but even that was “optimistic” given it took seven years for revenue yields to recover after the global financial crisis.

Pierfrancesco Vago, chairman of the industry body CLIA, is more optimistic: “I think that the level of 2019 will be seen in 2022. After every major economic downturn or collapse or pandemic, the aftermath and the reaction from the population is to be bullish, to enjoy and to spend.”