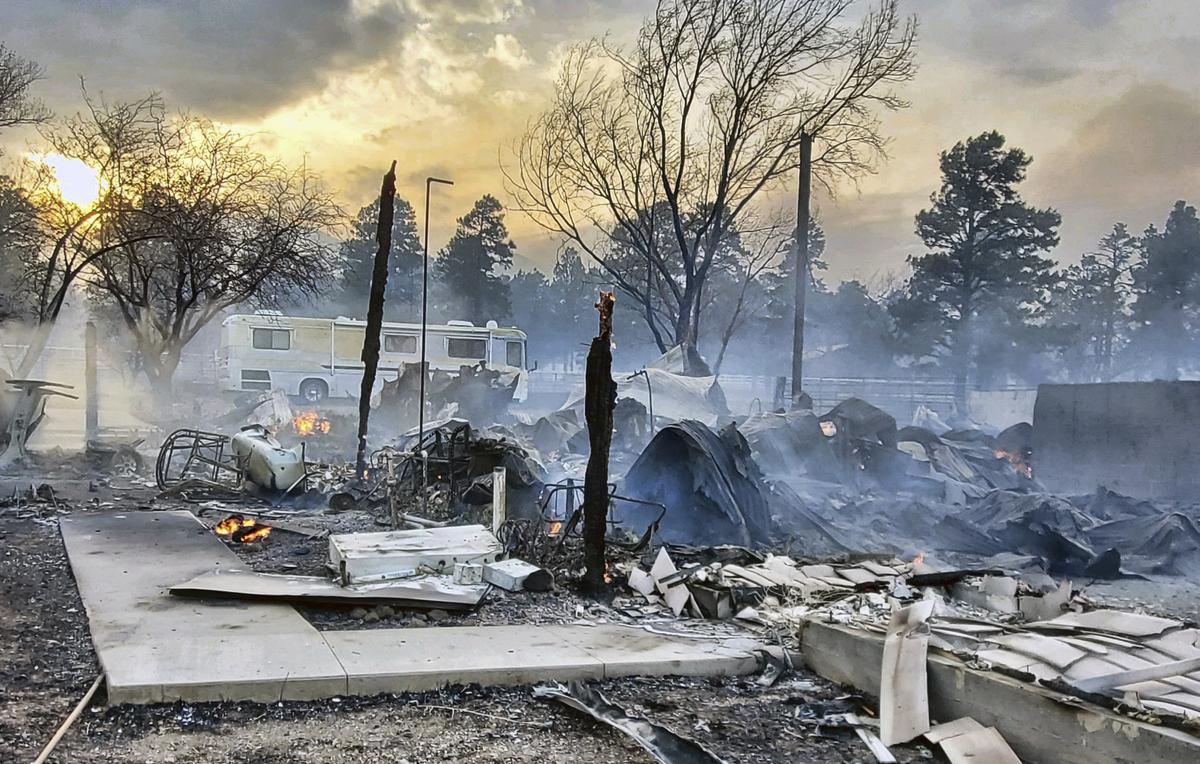 Bill Wells / For the AP

This Wednesday April 20, 2022, photo provided by Bill Wells shows his home on the outskirts of Flagstaff, Ariz., destroyed by a wildfire on Tuesday, April 19, 2022. The wind-whipped wildfire has forced the evacuation of hundreds of homes and animals.

FLAGSTAFF, Ariz. — Firefighters fanned out across blackened landscape in Arizona’s high country, digging into the ground to put out smoldering tree stumps and roots as helicopters buzzed overhead with buckets of water to drop on a massive blaze.

The work has been tedious and steady — all with the recognition that already strong winds will become stronger Friday and a shift over the weekend could turn the blaze up hillsides or toward homes on the outskirts of Flagstaff.

The 32-square-mile (83-square kilometer) blaze is one of a half-dozen major wildfires that have raced across Arizona, New Mexico and Colorado over the past week. Forecasters have warned that warm weather, little to no precipitation and spring winds create a dangerous recipe for wildfires.

Those elements are “pretty much on steroids in the atmosphere” for Friday said Scott Overpeck with the National Weather Service in Albuquerque, New Mexico. “And by that we mean they are really cranked up. Everything is overlapping together at the same time.”

More than 500 firefighters were manning fire lines in Arizona and New Mexico, with more help on the way by Friday morning when the largest type management team is scheduled to take command of resources at the blaze near Flagstaff.

It’s expected to keep growing Friday, fanned by the wind, said Jerolyn Byrne, a spokeswoman for the team working the blaze.

Neither officials nor residents have been able to fully survey the damage, as crews on Thursday were busy wrestling a spot fire and trying to keep flames from running up the mountainside. If that were to happen, it would mean a much bigger fire with long-term consequences such as erosion and flooding.

Still, spirits were lifted Thursday as helicopters for the first time were able to start dropping water on the flames. Aerial attacks also resumed on a pair of fires in New Mexico, where at least one airtanker was able to join the effort— something that’s likely to be impossible on Friday.

Sustained winds of 30-50 mph (48-80 kph) are forecast there Friday morning, with gusts from 60-80 mph (97-129 kph) in the afternoon from the Gila Mountains up through the Rio Grande Valley to neighboring highlands.

“There is high confidence that a widespread extreme and catastrophic fire weather event will occur on Friday,” the Santa Fe National Forest said Thursday evening in its latest update about a fire mostly west of Santa Fe.

“We are urging the public to stay vigilant, to continue to watch for expected changes in evacuation status and be prepared to leave in a rapid manner,” the agency said.

Sheriff’s deputies called for additional evacuations Thursday of scattered homes and closed some roads at a big fire burning in a rural area southeast of Taos, New Mexico, but reported no structures had burned.

Arizona Gov. Doug Ducey on Thursday declared a state of emergency in Flagstaff’s Coconino County. The declaration clears the way for state funding for evacuations, shelter, repairs and other expenses. However, the money can’t be used to reimburse home and business owners for losses.

About 30 structures have been destroyed, but it’s still unclear how many were homes, the county sheriff’s office said Thursday.

Hundreds of people have been evacuated because of wildfires burning in the Southwest. Popular lakes and national monuments closed in Arizona — including Sunset Crater Volcano National Monument outside Flagstaff because the wildfire moved directly over it, blackening trees, and burning tools and vehicles in a maintenance yard, said monument spokesman Richard Ullmann.

The Coconino National Forest has closed where the wildfire is burning but has not enacted broader fire restrictions or closures. A sign at a gate warns of potential loose debris, falling trees and branches, and flash floods.

Wildfire has become a year-round threat in the West given changing conditions that include earlier snowmelt and rain coming later in the fall, scientist have said. The problems are exacerbated by decades of fire suppression and poor forest management along with a more than 20-year megadrought that studies link to human-caused climate change.

Residents around Flagstaff — a year-round attraction for recreation, respite from desert heat, and Northern Arizona University — questioned how a small blaze reported northeast of the college town Sunday afternoon ballooned in a matter of days. Matt McGrath, a district ranger on the Coconino National Forest, said firefighters had corralled the wildfire Sunday and didn’t see any smoke or active flames when they checked on it again Monday.

By Tuesday, the wind was firmly in control. Flames emerged and jumped the containment line. Residents in some 765 homes were evacuated, along with 1,000 animals from the rural neighborhoods.

The fire’s cause hasn’t been determined. Investigators were at the site Thursday off a bumpy, gravel and dirt U.S. Forest Service road. In the distance, a large plume of grayish smoke rose over the surrounding hills. Snow still sat atop other mountains.

Smoldering stumps, scorched grass and charred trees dotted the area near where the wildfire started.

Preston Mercer, a fire management specialist with the Coconino National Forest, remembers standing on the same patch of ground in 2010, fighting another large blaze. Like that one, this fire has been taking advantage of dry vegetation and fierce winds.

“The environment is not very friendly. It was blowing 70 mph. Rocks were hitting everybody in the face. It was very smoky and we were working directly in the heat,” he said Thursday from the fire line. “These guys are working incredibly hard. They know the values at risk. This is their community.”

Crews nearby were focused on a 100-acre (40-hectare) spot fire that broke away from the main blaze toward hills that overlook nearby homes. One firefighter repeatedly swung a scraping tool as winds howled and smoke swirled through the air to reveal smoldering tree roots. He removed his glove and reached his hand into the ground to ensure it was cool before moving on and repeating the process.

In Colorado, firefighters got a handle on two small wildfires in the southern and northern part of the state while contending with strong winds.

The Boulder County blaze was sparked by the battery of a crashed drone that researchers were using to study severe weather, the sheriff’s office said Thursday. Researchers used a fire extinguisher, but the fire spread quickly in high winds, authorities said. The other fire damaged or destroyed an estimated 15 structures, including homes, in Monte Vista, a community of about 4,150 people surrounded by farm fields, police said Thursday.

Rocky Opliger, the incident commander on a wildfire that has forced evacuations south of Prescott, Arizona, said conditions are some of the worst he’s seen in nearly five decades of fighting wildland fires.

“This is very early to have this kind of fire behavior,” he said. “Right now we are on the whims of weather.”