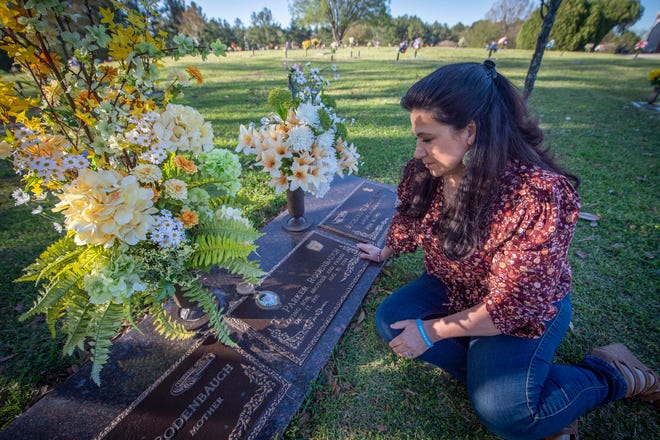 Cordie Rodenbaugh recalls a conversation she had with her son Parker at the end of his freshman year of college. He had decided to transfer schools to Mississippi State University to study architecture and they spoke about his future.

“He said, ‘Mama, I just want to make a difference in the world,” she said recently.

Parker died in 2014, when he was 22 before his junior of college, from the effects of a drug called 25b-NB0me, or “synthetic LSD,” which he took at a party and caused him to have violent convulsions. Two acquaintances at the party later testified in court that they sought out medical care but only after Parker was turning blue and appeared to have stopped breathing.

His death from the toxic effects of the drug led to what is believed to be the first known case in Mississippi where a drug dealer was prosecuted for murder in a drug-related death. The person who sold him the synthetic LSD, Skylar O’Kelly, was convicted of drug trafficking and second-degree murder and sentenced to two concurrent 10 years sentences in 2016.

The murder conviction, however, was overturned in 2018 by the state court of appeals, which found there was insufficient evidence to support the charge. O’Kelly was later resentenced on drug trafficking charges and remains in state custody.

Punishment for overdose deaths: Why second-degree murder charges for drug dealers aren’t resulting in convictions in the South

Since then, Rodenbaugh has devoted her life to speaking with families who have lost loved ones to drug overdoses. As deaths have surged due to synthetic opioids in recent years in Mississippi, she has held Narcan training in her home. But much of her focus centers on lobbying for tougher laws to hold drug distributors accountable for overdose deaths.

Attempts to pass such laws have failed until this year when HB 607 — better known as Parker’s Law — was approved by state lawmakers in March. Mississippi Gov. Tate Reeves signed the bill into law on April 19.

Drug users who share drugs resulting in an overdose or those who seek medical help for people who overdose can’t be charged under the law, however.

Save a life:What to know about drug treatment, Mississippi’s Good Samaritan Law and Narcan

Two Mississippians gone too soon:Families speak about losing their sons to opioid overdoses

State Rep. Nick Bain said the law was crafted with input from mental health experts and provides prosecutors a tool to go after this type of crime.

“And I believe it is a crime,” he said. “I think the bill is narrow and tailored to fentanyl and aimed at being a shield for people who are addicts and targets people trying to exploit them for being addicts.”

Drug overdose deaths have skyrocketed during the pandemic. There were more than 100,000 overdose deaths in the U.S. during 2020 and 586 were Mississippians, according to CDC data.

Deaths involving fentanyl climbed from 139 in 2019 to 313 in 2020, according to the Mississippi State Department of Health. More than half of these deaths involved the use of multiple substances and about a third were among people younger than 35.

In Mississippi and nationally, one of the primary causes of this crisis is the prevalence and availability of illicit fentanyl, said Col. Steven Maxwell, director of the Mississippi Bureau of Narcotics.

Unlike pharmaceutical-grade fentanyl, it can be cut, colored, scored, and pressed to be sold as a counterfeit for other illicit drugs such as Xanax, Ritalin or Oxycodone, he said.

Fentanyl is extremely lethal and about 50 times more potent than heroin.

Put into perspective, this amount equates to about 15 to 20 granulates of salt.

Opinion:To reduce drug addiction, we have to thoughtfully face it

His agency is responding to the crisis by collaborating with state health officials to educate the public about the dangers associated with the misuse or abuse of illicit drugs and of drugs potentially laced with fentanyl.

“When we talk to high school students about this we are trying to impress upon it’s no longer just marijuana but could be marijuana laced with fentanyl or some other synthetic drug. And oftentimes the retail-level sellers (selling small quantities) don’t know what they’re selling themselves,” he said.

Murder convictions in drug overdose cases are still rare, though the rise in synthetic opioid-related deaths has prompted more states to consider laws that would hold drug distributors accountable.

As of 2019, 25 states had some form of a drug-induced homicide law on the books, according to Temple University’s Prescription Drug Abuse Policy System. The charges vary by state from manslaughter to capital murder, which carries a life sentence without the possibility of parole.

In Mississippi, the O’Kelly case was one of the first known examples where a murder conviction occurred in addition to drug trafficking charges. Last month, Jackson resident Carlos Allen was sentenced to 124 years in prison without the possibility of parole for drug trafficking fentanyl which resulted in the overdose death of a 24-year-old man in 2021.

But these cases remain some of the few exceptions.

Drug-induced homicide laws date back to the 1980s and have been criticized by drug policy experts who say they criminalize vulnerable drug users rather than effectively target drug distributors.

Often these laws don’t have the effect they are intended to have and do more harm, said Angela Mallette, the founder of the Mississippi Harm Reduction Initiative, an organization that advocates for health-based solutions for people living with addiction.

“When you pass these types of laws, it creates increased fear among the drug-using population to call for help, ” she said. “It does nothing to decrease the number of people who use. People are still going to use a substance they’re dependent upon. But now there’s a possibility that they can be charged with murder if someone overdoses. In scenarios like that, it just precipitates more people dying.”

In addition to the safety nets built into Parker’s Law, a non-partisan committee of the Mississippi legislature will be required to evaluate and report how many people are prosecuted every year under the provisions of the bill.

“This will be a good way to see how this law is playing out and if it is resulting in any harmful practices,” she said.

The fallout from the alarming number of fatal overdoses linked to fentanyl and other synthetic opioids is being carried by entire communities. Janice Berlin, of Madison, Mississippi, is learning how to live again after mourning the loss of two sons to drug overdoses. Her eldest son Eric died when he was 33 in 2014.

Her other son Devin was 24 when he died in 2017 at home from fentanyl poisoning after taking what he thought was Percocet. She had a video call with him only two hours before his death.

From 2019:How millions of opioid pain pills flowed to Mississippi, bringing death

More:Hinds County coroners are ‘strung out, overworked and tired,’ handling 200 deaths a month

“Losing him totally devasted our lives. I have come back to life bit by bit,” Berlin said.

And like many parents who have lost children to fentanyl in recent years, Berlin has become an active part of that community, providing outreach and support to others grieving loved ones.

“I am not alone in this. Moms and dads are losing their kids every day and it’s got to stop,” she said. “This is a war against our children.”