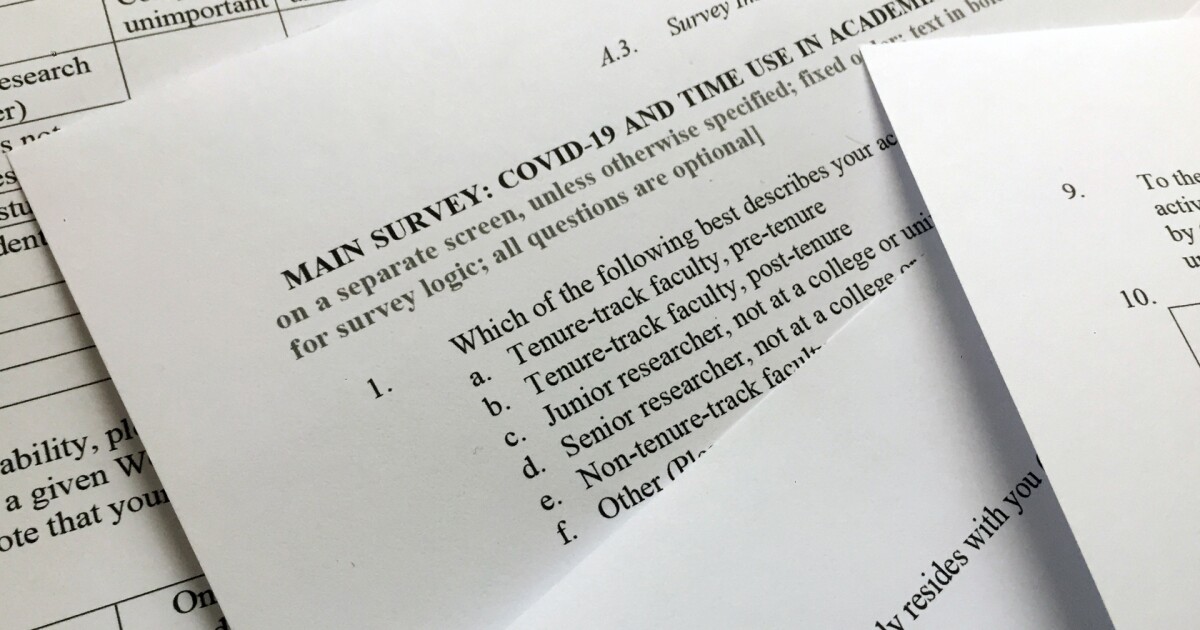 Female academic parents — especially those with younger children — have disproportionately lost research time during the pandemic, according to a new working paper released by the National Bureau of Economic Research.

When Covid-19 began to spread in the United States, and K-12 schools and day cares closed, experts worried that women would assume more child-care duties. Unable to sacrifice their service or teaching work, they’d have less time to write grant proposals, submit essays, or conduct studies, potentially hampering their careers in the long term.

That initial prediction seems to be bearing out, at least among nearly 20,000 respondents to a new survey conducted by Tatyana Deryugina, an associate professor of finance at the University of Illinois at Urbana-Champaign, Olga Shurchkov, an associate professor of economics at Wellesley College, and Jenna E. Stearns, an assistant professor of economics at the University of California at Davis. Their findings still must undergo peer review.

The authors emailed a survey to about 900,000 people who had published at least one academic article in the past five years. Between late May and mid-July of 2020, respondents could answer questions about how they spent their time before Covid-19 entered their lives and after. Ultimately, the authors used data from respondents who identified as male or female, held doctoral degrees, and whose time-use answers added up to 24 hours per day — a total of 19,905 people. Below are four notable findings:

When the pandemic first rattled higher ed, the authors note, many colleges extended tenure clocks and reappointment decisions, either automatically or through an opt-in policy. But scholars of faculty equity have argued that those extensions are delays in pay raises and job security. Such an approach may “further exacerbate gender gaps, as has been shown to occur with universal parental leave policies,” the paper says.

Instead, equity experts have urged colleges and universities to think proactively about how to change policies and procedures so that caregivers, women, and faculty members of color don’t slip out of an already leaky pipeline. (Though the NBER paper does not analyze race, previous studies have shown that scholars of color shoulder more time mentoring students of color and often perform diversity work for their institutions, detracting from research time.)

Some institutions are already executing changes, like rethinking promotion standards, allowing faculty members to submit personalized documentation of the pandemic’s impact on their work and home lives, and finding ways to alleviate the caregiving burden. Barnard College, for example, matched work-study students with faculty parents so that the students could virtually tutor the scholars’ children while the parents taught.

As the pandemic rages on, those solutions, and an institution’s willingness to think through these problems, will become paramount to their faculty’s future success.

It’s likely, the authors note, that their results actually underestimate lost research time, for a couple of reasons: The most overloaded scholars would be less likely to fill out a survey in the first place, and parents often simultaneously mind their children while attempting to do research, “making them less productive in both.”

At the time of the survey, 17 percent of respondents said that their institutions had made no policy changes at all.