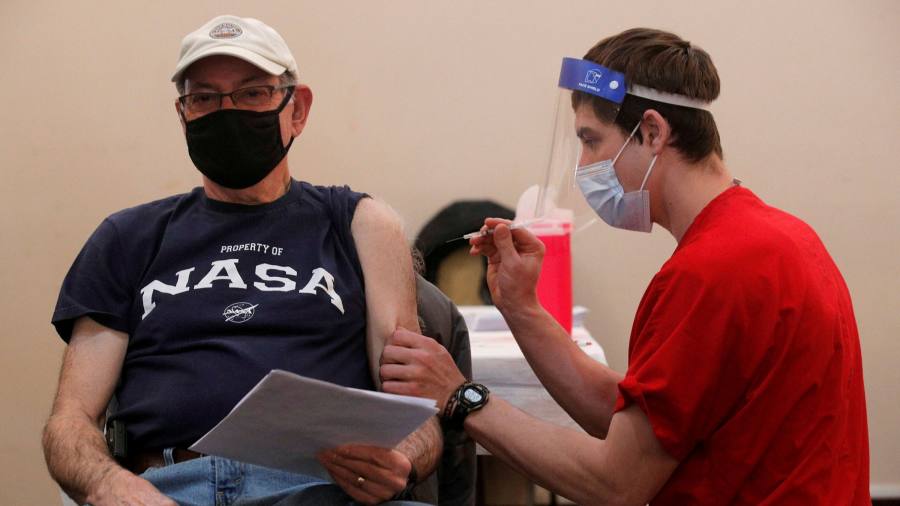 The number of US states on Chicago’s travel advisory list has topped 40, with most of the country experiencing high levels of Covid-19 transmission. Colorado, Maryland, Nebraska and South Dakota were added to the list on Tuesday, taking the total number of states on the city’s advisory to 43.

UK government advisers are set to recommend third doses of Covid-19 vaccines for immunosuppressed people from September as part of a “targeted” booster programme, which will later be rolled out to elderly patients. Over-70s who are not clinically vulnerable will have to wait longer for boosters, as guidance for that group is unlikely to be issued imminently.

Sales of newly built homes in the US rose for the first time in four months. Sales of new single-family homes rose 1 per cent in July from the previous month to an annualised rate of 708,000, the census bureau said on Tuesday. That exceeded expectations for 700,000, according to a Reuters survey of economists.

More than a third of South Africa’s workforce was jobless in the second quarter, according to data published on Tuesday that illustrated the struggles of Africa’s most industrialised economy to shake off the impact of the pandemic. Official unemployment rose to 34.4 per cent in the three months to the end of June, the highest since the jobless survey began and up from 32.6 per cent in the first quarter — about 7.8m people in all.

The Scottish government has unveiled plans for an independent judge-led inquiry into the handling of the coronavirus pandemic that it said would begin work before the end of this year. The strategy is likely to raise pressure on Boris Johnson, UK prime minister, to bring forward his plan for a statutory inquiry from the currently proposed spring 2022.

Gennova Biopharmaceuticals has inched closer to developing India’s first messenger RNA-based Covid-19 vaccine, as infections in the South Asian nation decline. India found that the drugmaker’s mRNA-based vaccine was “safe, tolerable, and immunogenic” after an initial trial, a statement from the government said on Tuesday.

Iran’s daily deaths from Covid-19 surpassed 700 for the first time on Tuesday as public wrath over insufficient vaccines intensifies. The health ministry said on Tuesday that 709 coronavirus patients had died over the past 24 hours, following another record on Sunday, when 684 people died. The number of confirmed cases rose to 40,623, one of the highest caseloads since the pandemic began.

Greece has cracked down on the unvaccinated, who will face restrictions and test demands, after figures show that nine out of 10 patients in hospital with Covid-19 are yet to receive a jab. Private and public sector workers, who have not been vaccinated or who have recently recovered, will from September 13 have to take one or two antigen tests a week at their own cost, health minister Vasilis Kikilias said.

Polish PM warns of an EU ‘deprived of democratic control’

HTGMFU 10: Why We Should Care About American Politics, Constitution, Democracy and Joe Biden Is ASS

The ‘QAnon’ movement is struggling to hide its antisemitic, neo-Nazi roots