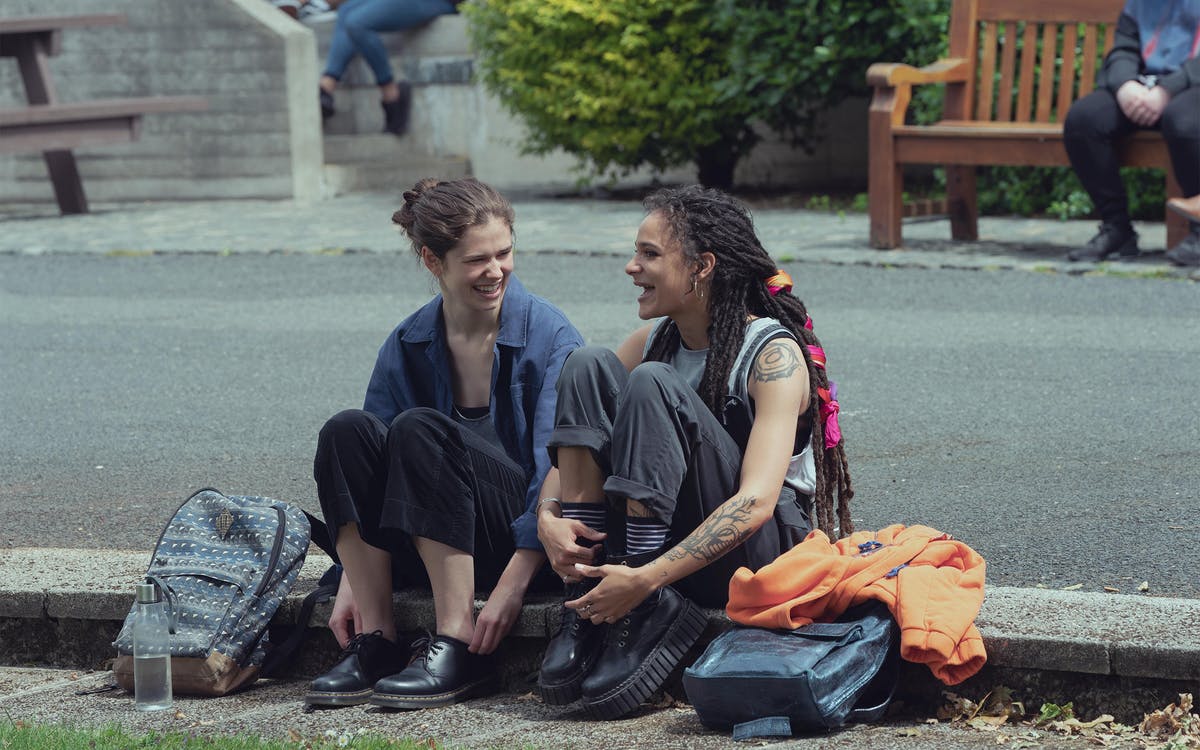 My favorite moment from Conversations With Friends takes place in the Hulu series’ final episode. Our protagonist, the 21-year-old Frances, played by Alison Oliver, is at a low point. Her love life is on the rocks, her best friend is mad at her, and she hasn’t told anybody about a new and daunting medical diagnosis. So she lashes out at Melissa (Jemima Kirke), an older writer whom Frances has viewed as an enemy, for reasons Frances herself doesn’t quite seem to understand, as Melissa has only ever been congenial. Their phone conversation gets heated, and the tables quickly turn as Melissa points out that Frances is the cause of the messy state of her own life.

“Your actions have impact! Your writing has impact! The way you have behaved has real consequences,” Melissa shouts. On the other end of the line, Frances’s shocked and wounded “Okay!” is the Sally Rooney version of the TikTok meme “Am I the drama?” In Frances’s wide eyes, you can see it dawning on her that maybe she has no right to pick a fight with the woman whose husband she’s been sleeping with. Frances, blind to her own narcissism, begins to cry and confesses her troubles to Melissa. Rather than hang up, Melissa pulls back from the phone, takes two quick, deep breaths, then asks, with as much concern as she can muster, “Are you okay, Frances?”

Thanks to small moments like these, the twelve-episode series elevates the best-selling novel it’s adapted from. Unlike Sally Rooney’s debut book, Conversations With Friends isn’t always limited to Frances’s perspective and shows us how Frances affects the people around her. Director and executive producer Lenny Abrahamson, who is also part of the team that helmed the 2020 adaptation of Rooney’s Normal People, uses impeccable casting, some lovely cinematography, and a spot-on tender soundtrack to stay true to Rooney’s work while adding new depth.

Frances is a college student and aspiring writer in Dublin who performs spoken-word poetry with her former girlfriend and current best friend, Bobbi (Houston-born and Dallas-raised Sasha Lane). After a show, Melissa requests to interview the pair for an article, and the connection quickly becomes an invitation into Melissa’s social orbit, where she introduces the young women to her friends and her actor husband, Nick (Joe Alwyn). As much as Frances is put off by Melissa, she’s also mysteriously drawn to Nick, a man who is repeatedly described as “passive.” Text messages between the two boil over into an affair, which is further complicated by Frances’s push-and-pull relationship with Bobbi.

In both the novel and the series, Melissa is cast as an uncaring and calculating woman who casually cheats on her husband and makes light of his struggles with mental health. But that’s mostly because we’re seeing her from Frances’s point of view. With those two quick breaths and an attempt to comfort the young woman who’s just verbally attacked her, we’re reminded that Melissa is the adult in this situation—perhaps the only actual adult out of the four characters—and her intentions in welcoming Frances into her life were, at one point, altruistic. For all of Frances’s intelligence, she lacks introspection: “I don’t think you think anyone else is real, Frances,” Bobbi points out during an argument. That brief second when Melissa pauses to take deep breaths and calm down makes her feel very real. It’s also a moment that Frances, by virtue of being on the phone, doesn’t ever see. The series gives us access to those small moments of humanity in the people around Frances that she either can’t conceptualize or can’t have access to.

Cast in a visual language that captures the muted tone of Rooney’s novel, this drama is all low contrast and soft focus, rendering the B-roll of college life in Dublin and the landscapes of Ireland and Croatia in gentle hues. The soundtrack is full of songs about love and longing from a lineup of mostly UK and Irish musicians, such as CMAT, PinkPantheress, and Wyvern Lingo. It’s capped off with an original track, “Sidelines,” by Phoebe Bridgers that encapsulates Frances’s misperception of herself as a passive participant in her own life (“Watch the world from the sidelines / Had nothing to prove”). As the romance between Frances and Nick unfolds and we get to experience the sweet thrills of late-night texts with your lover and the endearing awkwardness of early in-person exchanges, it’s easy to forget they’re having an affair, since even the sex scenes, although intimate, are far from steamy.

Frances is at a pivotal moment in her life, a point when the ideologies she and Bobbi endlessly discuss while pretentiously dismissing other viewpoints prove to be more challenging for her in praxis. How do you hold on to your communist beliefs when your father stops depositing money into your bank account? How much do you actually believe in building quality relationships around polyamory and “spontaneous consent” when your lover starts sleeping with his wife again? Not that much, it turns out, when you’re as self-centered as Frances is.

Oliver is a little too believable as the quietly chaotic Frances, and Kirke’s presence adds depth to a character that even she initially struggled to connect with. (“This is a marriage written by a twenty-two-year-old,” she first thought when she read the script.) Alwyn interprets Nick’s passivity as an invitation to speak most of his lines in a low, gravelly whisper. Sometimes, in the right scene, it’s a sexy come-on, but most of the time, it’s simply grating. Which, come to think of it, may be exactly the right way to play Nick. But the most notable casting decision in Conversations With Friends is Sasha Lane as the charismatic Bobbi.

In the novel, Bobbi is Irish and white, like Rooney herself and most of her characters. Lane’s version of Bobbi is a Black New Yorker. Bobbi makes just one passing comment about her Blackness, when she explains that moving to Dublin was “a bit of a culture shock” because there are “a lot of white people here.” Then her race is never acknowledged again. But what’s essentially a color-blind casting could have been an opportunity to examine how race might play a role in how Frances views and treats Bobbi. Exploring those issues on the show might have made the friends’ eventual reconciliation more compelling. Instead, their reunion feels rushed.

The unexplored potential of Lane’s casting is a minor hiccup. People in their twenties can be irresponsible, often without the self-awareness to realize it. In the novel, Rooney contrasted Frances’s intellectualism with her personal blind spots so subtly, it was almost unnoticeable. In the Hulu series, Frances’s blind spots are glaring. That makes her less likable, but it also makes her and the other characters, like Melissa, more interesting to watch.