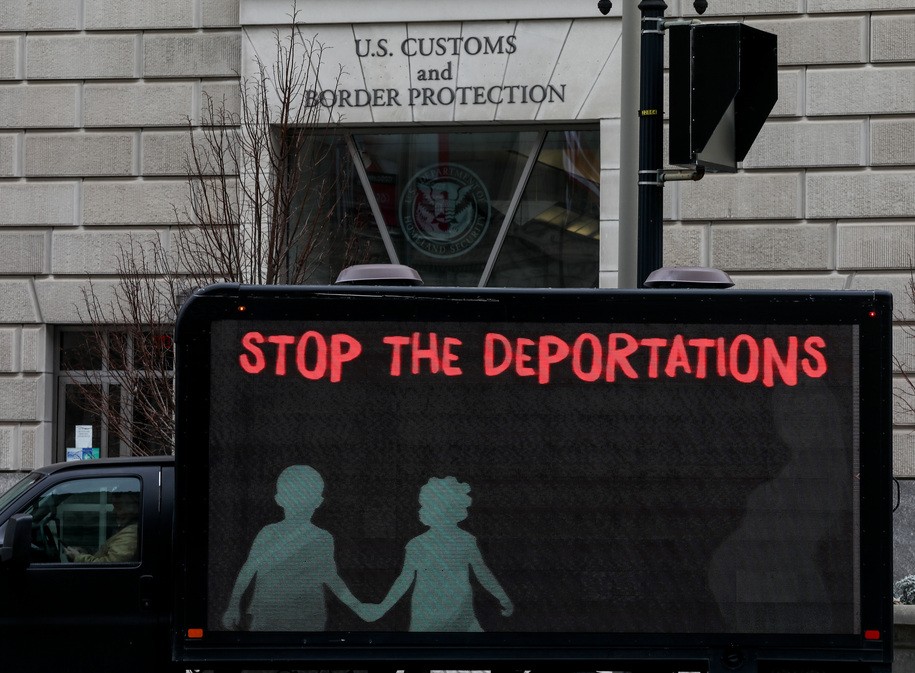 The complaint, filed by African Communities Together, the Black Alliance for Just Immigration, the Cameroon Advocacy Network, Haitian Bridge Alliance, The UndocuBlack Network, Texas A&M University School of Law Immigrant Rights Clinic, and Witness at the Border, said ICE used the restraint on asylum-seekers in October and November of last year. Castillo tried to tell agents seeking to put him on a deportation flight that he had a pending appeal with the Fifth Circuit, but agents moved to deport him anyway. “Someone said, ‘Get The WRAP,’” he said agents said.

“It was like being rolled into a bag,” he said in the complaint. “They tied my feet together, then they tightened The WRAP around my legs with three straps. They put something over my neck and around my torso and arms. They cuffed my hands in front of me and attached them to a chain around my waist. They snapped a rope or strap or cord from my neck to my feet. Then they leaned on my back and pushed my face toward my knees, and pulled the strap tight. My body was at a 40-degree angle. I was left completely immobile.”

Castillo described being carried by four to six men to the flight, having been completely immobilized. Indeed, the complaint includes a photo from the device’s own manufacturer that shows a number of men carrying a person wrapped in the restraint. “They eventually took The WRAP off, but I remained shackled all the way to Douala—around sixteen hours,” he continued.

The complaint states “The WRAP” is authorized for use by ICE in very limited circumstances.  “However, ICE is not using The WRAP in this manner,” the complaint said. “ICE places individuals in The WRAP before flights, or even at detention centers and on bus rides, not just onboard flights. ICE also uses The WRAP on individuals who are already in five-point shackles and therefore do not pose a threat to themselves or others.”

“The complaint alleges violations of numerous laws, including the Convention Against Torture, the Due Process Clause of the Fifth Amendment to the U.S. Constitution, the Rehabilitation Act, federal civil rights laws, and state criminal and tort laws, as well as ICE’s own detention standards on the use of restraints,” groups said.

This kind of horrific abuse is all too common for Black immigrants in particular, because this is only the latest civil rights complaint filed by advocacy groups in recent weeks.

In late September, advocates filed a complaint following the abusive treatment of Haitian asylum-seekers and migrants by border agents, saying photos from the southern border were just “one example of the horrendous mistreatment that all immigrants face, but especially Black immigrants in custody.” Earlier this month, another complaint exposed continued abuses at a detention facility in Florida, including outright flouting of pandemic protocols, risking the lives of Black migrants detained there. They said that no Black migrants were among the lucky people getting released. Late last year, groups also filed a complaint alleging that agents were torturing Black asylum-seekers into deportation.

“The darker your skin, the harsher the treatment,” another asylum-seeker, “Godswill,” said in the new complaint. Godswill said he was “broken by the experience of being WRAPped, so humiliated and ashamed.” Castillo, Godswill, and others in the complaint had been detained at Prairieland Detention Center in Texas, which made headlines last year when ICE officials created a COVID-19 outbreak there.

“Black people in America, including Black immigrants, are familiar with the U.S. government’s unrepentant misuse of medical devices and experimentation on Black bodies,” UndocuBlack Network interim policy and advocacy director Breanne Palmer said. “DHS and its component agencies must be held accountable for coercing Black immigrants onto deportation flights with what amounts to a torture device. It is time for all people to be outraged by the myriad ways Black immigrants are targeted by DHS for egregious harm.”

“Detention itself is torture and it is unconscionable for this administration to continue to uphold the additional torture of The WRAP, which is disproportionately used on Black migrants,” said Black Alliance for Just Immigration executive director Nana Gyamfi. “We call on all who support Black migrants to join in demanding that the administration immediately end this barbaric practice and free all migrants from detention and into our communities.”