Comic: Dousing the Fire in Chinese Markets By Investing.com 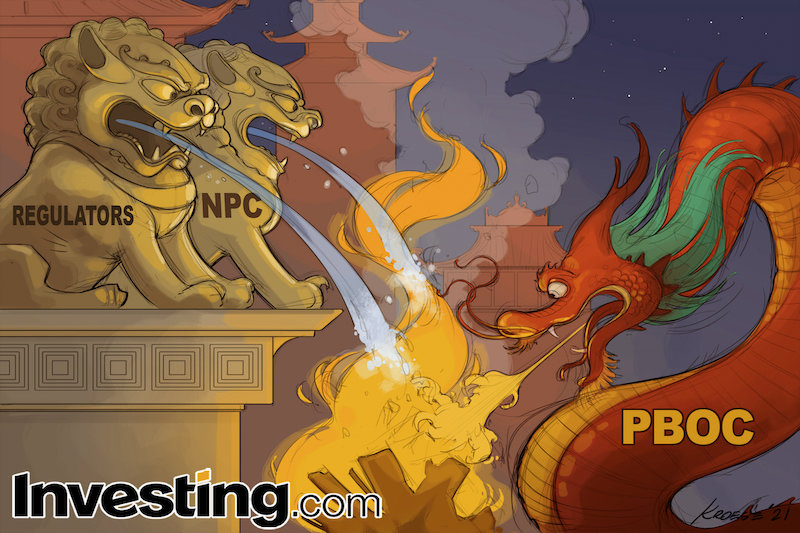 Investing.com — China’s financial markets have been in a funk of late, as the Communist Party grapples with two thorny problems: how to reduce the leverage that has built up in key asset classes as a result of last year’s stimulus, and how to rein in the influence and growing power of its thriving Internet companies.

At first sight, these issues might seem reasonably arcane to investors in the U.S. or anywhere else in the world outside China, but the sheer scale and interlinkage of China’s economy and – increasingly – its financial markets – with the rest of the world means that it would be foolish to ignore either issue completely.

Of most importance to the global economy are the latest moves to tackle excess debt. China’s problems with fast-rising debt are not a new development and, much like concerns about the overvaluation of U.S. tech stocks, many have grown tired of waiting for what is widely perceived as a bubble to burst: politicians and central bankers have seemingly inexhaustible ways of putting off what bears feel must be an inevitable day of reckoning.

But the signs are that Beijing is serious this time. The country’s top banking supervisor warned of bubbles in financial markets only two weeks ago, and the government’s work document, presented at the end of the National People’s Council earlier this month, has indicated a growth target of at least 6% – well below what many had expected. The (relatively conservative) International Monetary Fund, for example, had forecast 8.1% GDP growth for China this year as recently as January.

Government announcements since then have spelled out what the NPC only implied: ““Governments at all levels must tighten their belts,” the South China Morning Post quoted a State Council statement as saying this week. “We must solve the potential risks and consolidate the economic recovery.”

China’s overall debt ratio jumped by nearly 25 percentage points last year to over 270% of GDP, as the People’s Bank of China again indulged heavy borrowing by “shadow banks”, much of which appears to have been to entities connected to local governments. The SCMP quoted figures from China Chengxin International Credit Rating showing that such vehicles sold 4.49 trillion yuan ($920 billion) worth of bonds last year, up 28% from 2019.

This would be less worrying if investors could tell where the ultimate credit risk lies. More often than not, though, local investors appear to chase yield comfortable in the assumption that Beijing won’t allow government-linked entities to fail. Defaults – such as the one by Ping An-affiliated China Fortune Land on a $530 million international bond at the start of March – remain the exception rather than the rule.

But if investors in China still (largely) ignore credit risk, it’s a different story with equity risk – the risk attached to a certain business finding itself out of favor with the ruling Communist Party. The government is now in an increasingly open fight with the country’s biggest Internet-based companies, in what appears to be an expression of their enormous financial power and data capabilities.

Chinese stocks sold off heavily last week as markets interpreted a raft of seemingly token fines from the antitrust regulator as a warning shot across the bows of companies such as Tencent Holdings, search giant Baidu and ride-hailing company Didi Chuxing.

Again, what was implicit last week has become explicit this week. In a prime-time slot on state TV, Xi was reported as telling the country’s top economic committee to tighten regulation of the country’s Internet platform companies, closing “loopholes” and ending exemptions for them.

Almost certainly, this is no mere tweaking of a minor rule here and there. Beijing’s last-minute intervention to impose capital requirements on a suite of quasi-banking activities wrecked the plans of Alibaba affiliate Ant Group to go public last year, in what would have been the world’s biggest ever IPO. Reports since then have suggested the moves wiped around $140 billion off Ant’s valuation.

Alibaba’s (NYSE:) shares have fallen 24% since the Ant fiasco. Baidu’s (NASDAQ:) are down 20% and Tencent’s (OTC:) a relatively modest 18%. For comparison, Tencent’s stock fell by a third in 2018 after an argument with Beijing over making its videogames too addictive.

Tencent’s recovery since then is a good reminder that equity risk can be – and has been – effectively managed by a business elite that knows which way the political winds blow. All the same, until Xi’s messaging changes, it seems that the forces trying to douse the fire of Chinese markets are likely to outweigh those trying to fire them up in the near term.