Collins Elementary School one of thousands that still paddles students 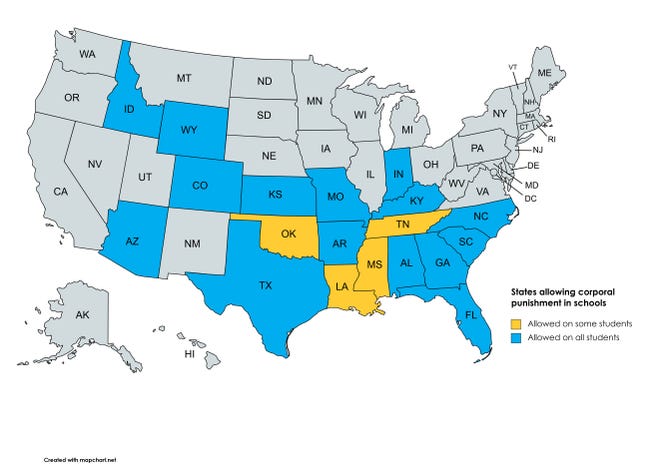 COLLINS — At the beginning of every school year, April Johnson oversees the distribution of the Covington County School District student handbook. Tucked into the first half is a section titled “Corporal Punishment.”

It says the punishment should be meted out sensibly, “and applied only to the student’s buttocks in such a manner that there will be no permanent effects.” It limits students to receiving “no more than three licks and one paddling a day.” It gives parents highly specific instructions if they don’t want their children paddled. And it offers students a caution: “refusal to take corporal punishment may result in suspension.”

Johnson is the principal of Collins Elementary School, where the paddle remains a staple of the educational experience. Local records show that nearly half the time students faced formal discipline this school year, their consequence was a paddling.

Globally, 135 countries prohibit corporal punishment in schools. The United States leaves it to states to set policy, and, absent statewide bans, local school districts make their own rules. Superintendents then leave it up to principals and often parents to decide whether to use corporal punishment on a given student, creating unequal systems of discipline within the same communities and even the same classrooms.

In Covington County, giving parents a say has helped prevent controversy over the use of corporal punishment, but a Hechinger Report investigation has found this system of local and parental control is rife with problems. School officials don’t always respect parents’ wishes. They implicitly — and sometimes explicitly — pressure parents and students into allowing or actively choosing the punishment, often by presenting it as an alternative to suspension. Families faced with the prospect of missed learning time and a daytime scramble for childcare, opt for the faster, physical discipline and a return to class.

Corporal punishment has been on the decline in the United States for the last several decades, in part because of growing evidence that it harms students’ well-being and academic performance while also failing to improve their behavior long-term. Thirty-one states ban the practice, and the most recent federal data show that in the remaining states, 90 percent of schools chose not to use it during the 2017-18 school year.

Mississippi doesn’t allow corporal punishment in daycare centers. Nor in-home foster care or licensed group homes. It’s not legal as a punishment for a crime. Yet students at Collins Elementary join the increasingly isolated ranks of those legally paddled at school.

Corporal punishment has never come under coordinated attack in Collins, a small city of about 2,500 in southeastern Mississippi. Many parents, like Johnson, send their children to school to repeat their own experiences with the paddle. They say it’s a necessary way to keep students in line and don’t feel particularly scarred by their own experiences with it. There are people of all ages who say they don’t have a problem with it.

Still, there are those who disagree — kids who don’t like getting paddled, and who don’t like their classmates to get paddled, either; parents who hold onto a sense of anger and injustice from their own youth, and adults who are surprised or even appalled to find out the practice remains.

Districts like Covington County’s tend to give parents control. District policy is to respect parents’ wishes and allow them to opt their children out, but some students who shouldn’t be paddled are paddled anyway, usually when parent letters get lost, or because school officials don’t check their lists before doling out corporal punishment, a problem documented both inside and outside Covington County.

Covington County Superintendent Babette Duty chalks those cases up to human error. “Certainly, as long as human beings are running schools, you’re going to have that possibility,” she said, adding that the goal is to have policies and procedures in place that uphold the law and protect kids while keeping parents informed.

Sometimes, though, the system breaks down.

Damion Rankin Gooden, now an 18-year-old senior at a nearby private school, spent first and second grade at Collins Elementary School and 10th grade at Collins High School. Over spring break, he wandered into his mother’s office on Main Street in Collins just in time to hear her explaining her opposition to school-based corporal punishment. Arnella Rankin has bad memories of getting paddled and argues the practice doesn’t solve anything.

“I knew when my kids went to school, I was not going to let them get paddled,” she said.

But Damion chimed in that he got paddled all the time at Collins Elementary School.

“You weren’t supposed to get no paddle,” Rankin pushed back. “I signed the paper.”

Damion is built like a football lineman and speaks softly, with a warm glimmer in his eye and a lift at the corner of his lips. His time in elementary school preceded both Johnson’s leadership at Collins Elementary and Duty’s in the district. The elementary school’s paddling system remains clear in Damion’s mind: “You got colors,” he explained, “green, yellow, red. Once you get red, you get paddled.”

His mother’s eyes widened at the recounting. She shook her head.

“You really got paddled?” she asked again.

Collins Elementary School inhabits a single-story brick building with a “little free library” in the front yard and a “discovery garden” in the back. Slogans pepper the building’s walls: “Be Respectful, Be Responsible, Be Safe.” “Excellence with Determination.” “I am the Pride of CES.”

For Johnson, the paddle remains central to her discipline policy. “Sometimes I feel like that’s all the child needs,” she said. “Sending the kid home, that’s what they want,” Johnson said she especially likes to secure permission to paddle students if she suspects parents aren’t offering any disciplinary reinforcement at home. She insists, though, that it is, ultimately, the parents’ decision.

More:Jackson teachers union sued district over unconstitutional policy. How did a judge rule?

‘All it took was one silly book’:Hinds County School Board to rule on educator’s firing

Sherrell McGee described receiving subtle pressure from Johnson and prior administrators to reconsider her anti-paddling stance. Once, the pressure came when McGee was out of town. She got a call from a former school official about her son. He had misbehaved and while they would normally send him home with a suspension, given her preferences, they knew she was out of town and might have trouble getting him, so they wanted to check again. “Just go ahead and let him take the paddle,” she remembers hearing. “I said, ‘No! Thank you. I’ll send someone to pick him up.’”

Opponents of corporal punishment argue presenting parents and students with the choice of the paddle or a suspension — which research also shows is ineffective and comes with a host of negative consequences — is disingenuous. “What a horrific false choice,” said Morgan Craven, the national director of policy, advocacy and community engagement at the Intercultural Development Research Association, a San Antonio-based group that advocates for bans on corporal punishment. “These are the only possible two things we can come up with?”

Sometimes, schools even force children to choose. Ellen Reddy, CEO of the Nollie Jenkins Family Center, said a middle school principal in Holmes County kept a paddle inscribed with the words, “Take the wood or go to the hood.” Human Rights Watch spoke to children making this “devil’s bargain” for a 2008 report. “Providing students a choice in this context is fundamentally exploitative,” the report reads, “preying on vulnerable young people with underdeveloped decision-making capabilities.”

Researchers have shown corporal punishment feeds anger and resentment or anxiety and fear in children, all of which can have lasting consequences on students’ perceptions of school and on their academic success. A large body of behavioral research has further found that punishment more generally does not work to change long-term behavior and instead leads to resistance and aggression.

In a handful of states, this research has been compelling enough to convince lawmakers to ban corporal punishment on students with disabilities, if not all students. Mississippi was the latest to pass such a partial ban in 2019. Implementation hasn’t been perfect: school districts admitted to paddling students with disabilities 211 times since the new law made it illegal, according to state data acquired by Hechinger through a public records request.

Few, if any, of those districts will face consequences. Jean Gordon Cook, director of communications at the Mississippi Department of Education, said the agency only addresses illegal corporal punishment use on students with disabilities if someone reports it.

Many districts, though, appear to have radically limited corporal punishment or stopped the practice entirely since 2019. The Yazoo County School District used to routinely paddle kids, but Superintendent Ken Barron said teachers and administrators both felt uncomfortable with the new level of inequality within the student population. Having a given punishment on the table for only a subset of kids breaking the rules seemed too unfair. But Barron has seen a silver lining: teachers have risen to the occasion by trying to sidestep discipline problems in the first place, making their classrooms more engaging and focusing on relationship-building. “I think it’s shifted how teaching is being done,” Barron said, “which is a good thing.”

During the first year of the partial ban, the state logged a 70 percent drop in paddlings.

It’s possible the federal government will step in to end the practice entirely. The Protecting our Students in Schools Act, introduced by Democrats in both chambers, would ban corporal punishment in all schools receiving federal funds. Advocates say it may still take years to abandon local control on the issue but a hearing in February marked the first congressional discussion of corporal punishment since 2010.

In Collins, Johnson acknowledged the shrinking pool of students she can paddle might soon disappear entirely. Each year, more Collins Elementary parents fill out forms denying educators the option of paddling their kids.

Duty, the superintendent, has expanded an in-school suspension option as a more palatable alternative to corporal punishment and secured grant money to train teachers in more positive behavioral management strategies.

“I’m hopeful that just organically this is all going to end better for kids,” Duty said.

Should further legislation force her hand, however, Duty said she would prioritize hiring more counselors and psychologists to support student social-emotional health and try to head off behavior problems. She said those positions would be hard to fill — and, with routine underfunding from the state, hard to pay for — but she sees them as a necessary component of discontinuing corporal punishment.

Every week that the district continues to allow the practice, and the state and federal governments refuse to step in, however, schools log more cases.

As of late April, the last child to get paddled in the district’s schools was a first-grade boy at Collins Elementary.

This story was published in partnership with the Clarion Ledger and the Mississippi Center for Investigative Reporting, a nonprofit newsroom that exposes corruption and injustices, shines a light into the darkness and raises up a new generation of investigative reporters. Sign up for our newsletters here.