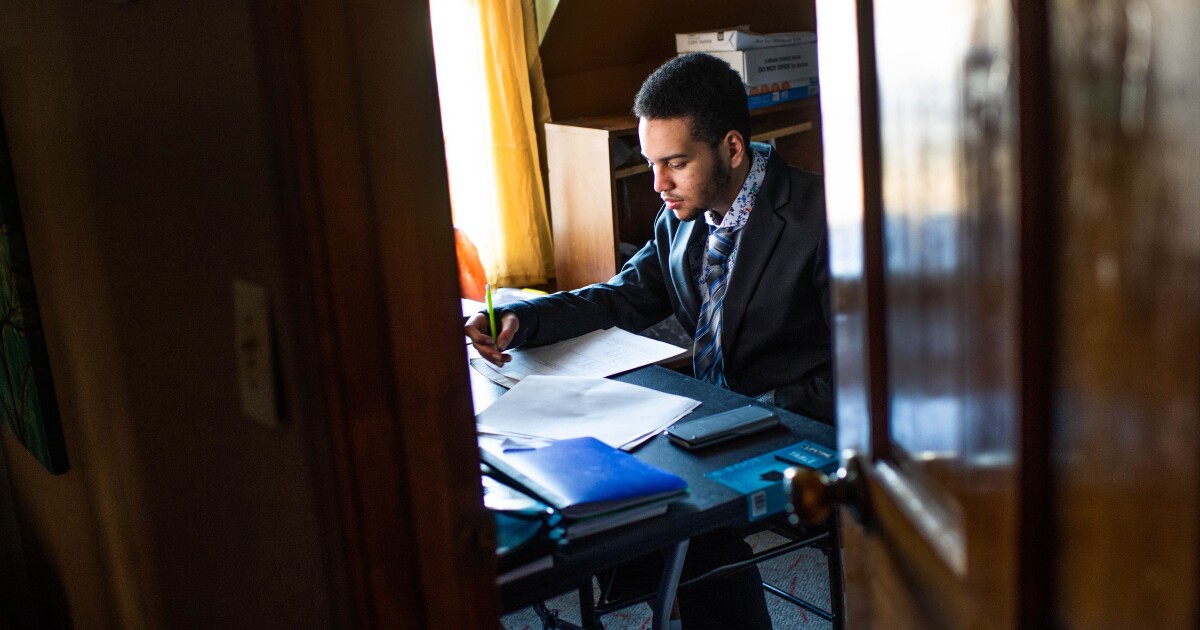 Three months before the start of his freshman year, Paulino contracted Covid-19. The coronavirus attacked his nerves, aggravating the symptoms of his carpal-tunnel syndrome. For weeks, he couldn’t move his arms, write, or use his phone. Even sleeping was “brutally painful,” he recalled.

Fortunately, Paulino’s Covid symptoms improved enough by the end of the summer for him to enroll in the engineering program at Quinsigamond Community College, in Worcester, Mass. But the carpel-tunnel problem persisted — and intensified, with all the writing required in his Calculus 2 and macroeconomics courses.

“I wasn’t expecting college to make it worse,” said Paulino, whose parents are Dominican immigrants.

Yet, in some ways, Paulino is one of the lucky ones. Thousands of would-be freshmen didn’t make it to college this year, driving down first-time fall enrollment by 13 percent, according to the National Student Clearinghouse Research Center. Among Latina/o students, first-time enrollment plummeted by nearly 20 percent.

Community colleges have been particularly hard hit, losing close to a fifth of all their first-time students and more than a quarter of their Latino and Latina freshmen.

The sudden drop, which followed years of progress in raising Latino/a enrollment and completion rates, reflects the unequal toll the pandemic has taken on the health and finances of people of color. Black and Latino Americans are more likely than white Americans to have lost a job during the pandemic, and more than twice as likely to have become infected with the coronavirus, according to the Centers for Disease Control and Prevention.

But the consequences of this year’s enrollment plunge could reverberate broadly, affecting not only individuals but the economy at large. If thousands of Latinos miss out on the earnings boost that comes with a college degree, state and federal tax revenues will shrink, spending on social programs will rise, and shortages of skilled labor will worsen. Community colleges, which have always operated on thin margins, will have even less revenue to support the students who remain.

In Massachusetts, one of several Northeastern and Midwestern states that are projected to experience a double-digit decline in high-school graduates from 2025 to 2037, the losses are especially worrisome. Latinos are the state’s growth engine, accounting for an increasing share of students in the shrinking college pipeline.

“My worst fear is that we could lose a generation of students at a time when Massachusetts can ill afford to lose any students,” said Carlos E. Santiago, the state’s higher-education commissioner. “If we have declines in a population that has been growing, it will be a huge economic problem.”

So far, there aren’t many signs of an enrollment turnaround for the fall of 2021. Fewer students than normal are applying for federal student aid — an early indicator of their intent to enroll — and surveys show that more than 40 percent of prospective students are reconsidering their plans to attend a community college.

Now, with only a few months remaining until the end of the academic year, colleges and college-access groups around the country are rushing to avoid a repeat of 2020. They’re surveying would-be freshmen to find out what kept them from enrolling this year; enlisting faculty and staff members for phone banks targeting current high-school seniors and last year’s graduates; and collaborating with local high schools to track students’ progress in applying for college and financial aid.

“We’ve got an absolute catastrophe looming here,” said Lane A. Glenn, president of Northern Essex Community College, where nearly half the student body is Hispanic and enrollment among degree-seeking Hispanic freshmen is down almost 20 percent. “We’re scrambling to do everything we possibly can.”

Community colleges have been shedding students since the end of the last recession, in 2009. From 2010 to 2017, two-year colleges lost 14 percent of their enrollment — about a million students.

But Latino/a undergraduate enrollment continued to climb, nearly doubling from 2001 to 2017.

With the number of Hispanic high-school graduates rising, that momentum had been expected to continue. In Massachusetts the number of such graduates is forecast to increase by 64 percent by 2036, helping offset a 30-percent decline in white graduates.

Then came Covid-19, erasing years of progress in a single semester. With schools closed, would-be freshmen stayed home to watch younger siblings while their parents worked. They took full-time jobs to support their families, after their parents were laid off. And they stuck around out of a fear of bringing the virus back to vulnerable relatives in their multigenerational homes.

Forced to choose between an education and their families, thousands of Latinos chose family.

“Priorities have shifted,” said Vivian Irrgang, who oversees the Gear Up college-prep program in Lawrence, Mass., where 80 percent of the population is Latina or Latino. “College has become a second plan — if it’s even still a plan.”

There’s a psychological element in the fall enrollment decline, too, said Mark Culliton, president of College Bound Dorchester, which works with gang-involved youth. Confronted with what some are calling the “twin pandemics” of the coronavirus and systemic racism, some young people have stopped believing in a better future.

“For our students, college is really a leap of faith,” Culliton said. “When you have what’s happening in the world, it’s hard to summon that hope.”

All told, 22 percent fewer high-school graduates went straight to college last fall than in 2019, according to the National Student Clearinghouse Research Center. Among students who attended high-poverty or high-minority high schools, the drop was even steeper.

Massachusetts’ community colleges lost a third of their Black freshmen this year, and a quarter of their Latina/o freshmen, state data show.

Those losses are threatening the state’s effort to increase the share of its Black and Hispanic residents with college degrees. Though Massachusetts has more adults with college degrees than does any other state, it also has some of the nation’s largest attainment gaps. Among the most pronounced: a 43-percentage-point gap in college-graduation rates between white women (at 65 percent) and Latino men (at 22 percent).

It may not be surprising that low-income students and students of color would put off college during a pandemic that has disproportionately affected their families. They are, after all, the students who face the highest hurdles to enrollment in the best of times.

In past recessions, unemployed adults have flooded two-year colleges, seeking credentials that would get them back to work quickly. Colleges were “betting on that model happening again,” said Rufus Glasper, president of the League for Innovation in the Community College.

But this recession is different. The lost jobs haven’t really disappeared — they’ve just been put on hold, indefinitely. Displaced workers seem to be waiting for the work to return, rather than returning to school.

Layoffs in the hospitality and retail industries, which employ many Latino/a workers, have also made it harder for adult students to afford an education, prompting many to delay college or stop out.

“With all the pivoting and uncertainty about what our institutions will do, you can’t plan for anything,” he said. That’s a challenge for working parents, in particular, he added.

Whatever the reasons for the drop, one thing is clear: Recent high-school graduates are postponing college, and the adult students who were supposed to replace them aren’t showing up, either. Overall community-college enrollment is down nearly 10 percent nationally, and more than 11 percent in Massachusetts.

For last year’s high-school graduating class, the coronavirus couldn’t have come at a worse time. Mid-March, when most schools and colleges shut down, is when many seniors are in the midst of reviewing financial-aid award letters and choosing among colleges. It’s when many first-generation students lean on counselors the most.

With schools closed, students couldn’t wander into a counselor’s office for help, and counselors couldn’t buttonhole students in the hallway about their progress. Counselors tried to stay in touch with their students via text and email, but they lost contact with some.

But last year’s graduates had one thing going for them after last spring’s shutdown: They knew their counselors. Many of this year’s seniors never got a chance to meet their advisers face to face.

“We haven’t been able to build that relationship,” Irrgang said.

The widespread shift to remote and hybrid learning also compounded existing challenges in getting students to apply for federal financial aid, an already complex and intrusive process. And some students, like Shantal Burgos, a 2020 Lawrence High School graduate whose father is from Puerto Rico, say they don’t want to waste their federal aid on an online education.

“I’m a physical learner, so the thought of being in college on a computer is stressful,” said Burgos, who had planned to attend Northern Essex Community College this year, but is working instead. “Home is not my learning environment. My baby sister would be in here, yelling at me.”

Even when counselors can get students to commit to an online workshop or a one-on-one session to guide them through filling out the Free Application for Federal Student Aid, the Fafsa, things don’t always go smoothly. The internet might go out, or the screen might freeze; a student may disappear to search for a tax document. A process that would typically take an hour is now taking three or four times as long, according to Robert Dais, the state’s Gear Up director.

In Massachusetts, the Fafsa–completion rate is down 6.6 percent from this time last year, with just over half of high-school seniors having filled out the form..

In an effort to raise those numbers, Irrgang is offering Target gift cards to students who complete the Fafsa. She’s created a spreadsheet in which Lawrence’s high-school counselors and Gear Up coordinators can track each student’s progress in applying to college and for aid, and she’s assigned cohorts of students to counselor-coordinator pairs. If one member of a pair finds a missing student, he or she will text the other to meet in a virtual room. Irrgang also worked with Northern Essex Community College to stage two bilingual Fafsa-completion nights.

Colleges are stepping up, too. Northern Essex, the first federally designated Hispanic-serving institution in New England, has used federal stimulus dollars to make sure every student who enrolls can afford a laptop — eliminating one barrier to enrollment — and has hired bilingual student “ambassadors” to help new students navigate online learning. The president of Quinsigamond Community College, which has seen one of the state’s smallest declines in first-time Latino/a enrollment, has sent those students to local high schools to share their stories, and has written articles for the local Spanish-language newspaper to encourage students to enroll.

Holyoke Community College, mindful of the role that a sense of belonging plays in student success, has created a new mentorship program for students of color, so they feel connected to the campus even when they’re stuck at home.

The stakes are high: Research shows that low-income students who postpone college are less likely to graduate on time, if at all.

“There really is no such thing as a gap year for low-income students,” said Kim Cook, executive director of the National College Attainment Network. “They take a low-wage job to support their family, and then it becomes hard to imagine not bringing any money in.”

“Unfortunately, there’s a bit of now or never,” she said.

Cook says there’s still time to save the high-school Class of 2021 — if colleges and access groups act with urgency.

“We’re getting to the crisis point,” she said, “but we’re not there yet.”