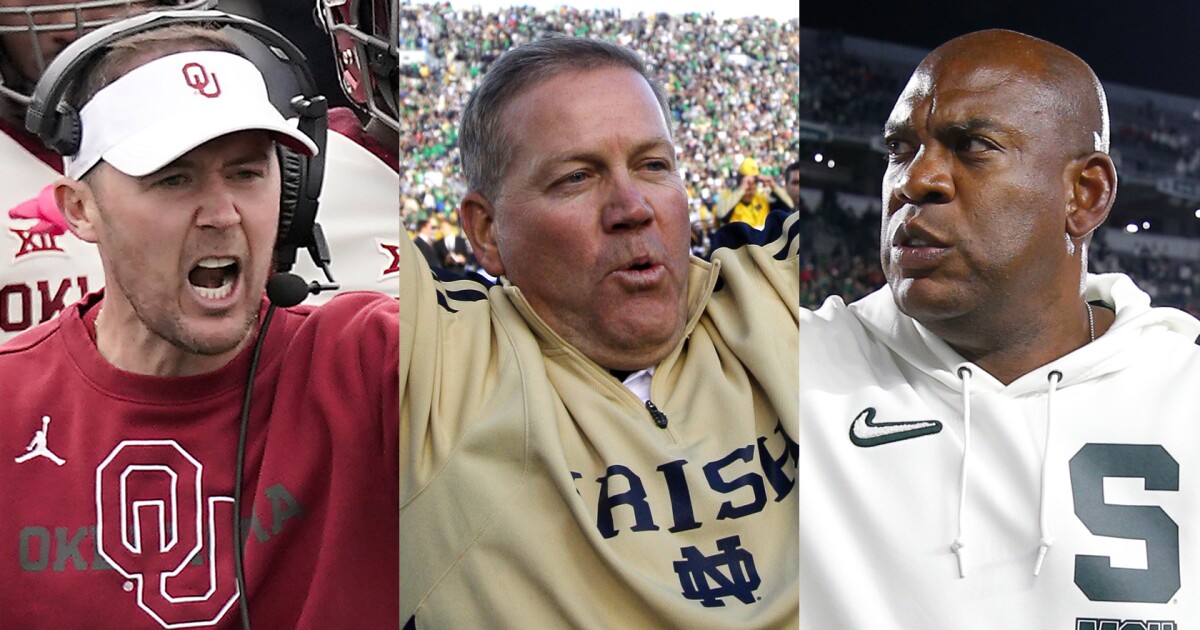 Not long ago, for a dark sort of fun, Joy Blanchard, an associate professor of higher education at Louisiana State University, calculated the difference between her salary and that of her university’s head football coach at the time, Edward Orgeron.

Blanchard’s base salary is “in the neighborhood” of $80,000 per year, plus she teaches three classes more than her contract stipulates, earns a stipend for being a program leader, and has a side job teaching spin classes at the university’s recreation center. Orgeron made more than $9 million per year before leaving LSU this fall, according to USA Today. Blanchard wanted to know how long it would take him, at his salary, to earn her salary.

“I based it off a five-day work-week,” she said. “I’m sure coaches are working seven, but I do as well.”

Now that Orgeron is out — and Brian Kelly, until recently the University of Notre Dame coach — is in, that number is even smaller. Kelly, the university announced this week, signed a 10-year contract worth $95 million, or $9.5 million a year. For universities with top football programs, this seems to be the going rate. The University of Southern California hired Lincoln Riley from the University of Oklahoma, and though Trojans management did not make the details of the contract public and declined to share them with The Chronicle, they are likely to approach or exceed Kelly’s figure. Meanwhile, Michigan State University announced last month that it had signed its head coach, Mel Tucker, to a new 10-year, $95 million contract as well.

That’s a lot of money on almost any scale. But for universities still emerging from a pandemic, it’s astronomical.

It’s especially jarring, Blanchard noted, given how hard the NCAA has fought to prevent players from making any money beyond their scholarships and associated fees.

Aside from paying Blanchard’s annual salary many times over, here’s a few other things that $95 million would cover at LSU or Michigan State:

This is not to say that administrators at Michigan State or LSU had an extra few million dollars in their budgets and decided to spend it on coaches. The most revenue-soaked athletic departments generate enough money to support themselves and are largely independent from their universities.

“It looks bad when you see those numbers being thrown around,” said Willis Jones, an associate professor of higher education at the University of Miami. “The first reaction is, how many libraries could be fixed up with those coaches’ salaries? But it is important to note that often those are two different pots of money.”

In recent years, some athletics departments with Division I football programs have seen a huge increase in revenue because of the contracts their conferences have signed with television networks like ESPN and Fox Sports, Jones said. The Southeastern Conference, for example, signed a $300 million contract with ESPN last year. Athletics departments with big football and basketball programs also make money from ticket sales and donations. Boosters, particularly, can loom large. This year, two donors at Indiana University joined forces to buy the men’s basketball coach out of the $10.3 million owed to him after he was fired, and to replace him.

How many libraries could be fixed up with those coaches’ salaries?

Universities will often point to their football programs as important emblems of their brands, saying they’re tools to reinforce relationships with alumni and attract new students. Jones said there’s some debate about whether that’s true. According to his research, a winning football team does have a positive relationship with numbers of applicants, but “it’s fairly small, and it’s fairly fleeting.”

Jones added that though big athletic departments often generate revenue separately from the university, “there’s a philosophical conversation to have about how we got to the point where there was so much value placed on athletics.”

“Is that really part of the mission of the university?” he asked. “For whatever reason, this country has made college athletics this symbol for higher education.”

It’s hard to make the argument that the money flowing to sports teams, even though they may be financially independent, doesn’t affect the university, Blanchard said. She pointed to allegations that LSU covered up sexual misconduct in order to protect the football program, reported by USA Today.

But she doubts she’s seen the end of the ever-growing coaches’ salaries. “Next year,” she said, “we’re going to hear about the $11 million coach.”

U. of Michigan Ousts Its President for ‘Alleged Sexual Affair’ With Subordinate