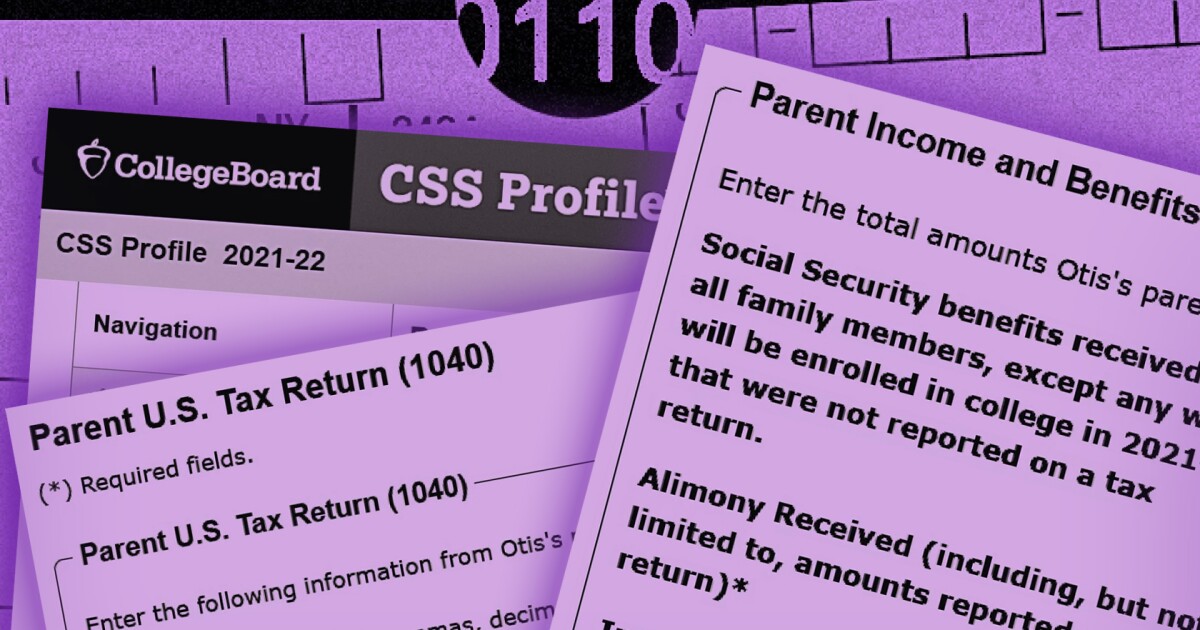 Families making up to $100,000 a year will no longer have to pay for the CSS Profile, an online form applicants must use to apply for institutional aid at scores of high-profile colleges. The College Board, which announced the change on Wednesday, also plans to create a “lighter, shorter” version of the lengthy application, which many college-access advocates have described as a barrier for low-income and first-generation applicants.

“Financial aid benefits millions of working families every year,” David Coleman, the College Board’s chief executive, said in a written statement, “and we need to make it easier to access those resources.”

The College Board, which owns the CSS Profile, has long provided fee waivers based on an applicant’s parental income and family size (previously, a family of four would qualify with an income of $45,000 or less). Orphans and wards of the court under 24, as well as students receiving SAT fee waivers, also qualify. Otherwise, an applicant must pay $25 to submit the CSS profile to one college, then $16 a pop for each additional one.

Granting a fee waiver to families earning less than $100,000, the College Board said, would double the number of students who don’t have to pay for the application, completed by more than 400,000 students a year.

“We’re always looking to streamline the way we serve a wide group of students,” said Gail Holt, dean of financial aid at Amherst College and a departing member of the College’s Board CSS/Financial Assistance Assembly Council. “We know that the application fee is one of many costs is that families worry about, especially at the lowest income levels.”

The CSS Profile, which approximately 300 colleges, universities, and scholarship organizations use to allot about $9 billion a year to students with need, provides a full picture of an applicant’s financial situation and family background. It’s more detailed than the Free Application for Federal Student Aid, or FAFSA, which families use to apply for government grants and loans.

Holt described the CSS Profile as an essential tool for complicated work. “Every year, more students, from a very wide spectrum of society, are applying for financial aid,” she said. “We are being tasked with really interrogating who we are giving money to and how are we doing it, and it’s becoming harder and harder to allocate those dollars in a fair, comparable way.”

As The Chronicle reported in a deep-dive article about the CSS Profile in February, completing the onerous form is difficult for many applicants — especially those who happen to be poor. Cost is one obstacle; the form’s complexity is another. One college counselor told The Chronicle that she warns students about the form well in advance by telling them, “When you get to the CSS Profile, colleges are going to ask you to chop off your finger and mail it to them.”

The College Board, which said the new version would be available as early as the fall of 2022, did not provide details on how it might differ from the current version. Samantha Veeder, chairwoman of the College Board’s CSS/Financial Assistance Assembly Council, said that the new version of the form would be more user-friendly, with fewer questions and “a lot more intuitive skip logic” that would factor out inapplicable questions for each applicant. The College Board and CSS Profile institutions, she added, are working to streamline the existing form as well, eliminating unnecessary questions.

The College Board said it continues to bolster its technology to make the current form easier to complete. The latest version includes enhanced skip logic and customer support for Spanish-speaking families, the organization said.

One change in this year’s form: After answering a few key questions, applicants who are eligible for a fee waiver will see a message that says, “Based on information you have provided … you can submit this form for free.” Previously, students saw such a notification only after completing the form.

The College Board’s announcement comes as many colleges are preparing for changes in the FAFSA. Late last year, Congress approved long-awaited revisions in the form and federal aid methodology. As a result of those revisions, which will be phased in over several years, the federal form will be much shorter.

That presents a challenge for colleges. Though the pared-down application will make applying for federal aid less tedious and time-consuming for applicants, some financial-aid officials say it will also make their aid determinations more challenging.

“While simplifying the FAFSA is wonderful news,” Veeder said, “it makes it more difficult for many of us at private institutions to be really equitable for families and make sure that we are truly awarding our limited financial-aid resources to those families who really need it.”

Michael J. Runiewicz, director of student financial services at Washington University in St. Louis, told The Chronicle earlier this year that many colleges “will be looking for information that will no longer be on the FAFSA.” That, he suspected, would create more demand for the CSS Profile.

There’s no law, of course, that says that the form is the only possible means of assessing a family’s financial need or allocating precious resources efficiently and fairly. As The Chronicle reported this year, some institutions, including the University of Chicago, have created their own institutional aid forms that are much shorter and simpler to complete than the CSS Profile.

Soon there will be a CSS Profile Lite. But will it be better for applicants?

Sara Urquidez, executive director of the Academic Success Program, which provides college advising to many low-income students attending public high schools in Dallas and Houston, has seen firsthand the toll that the CSS Profile takes on applicants. She was skeptical of the College Board’s announcement: “I’ll believe that the form will be lighter and easier for students to fill out when I see it.”