Climate Activists Rally at the White House to Demand Action 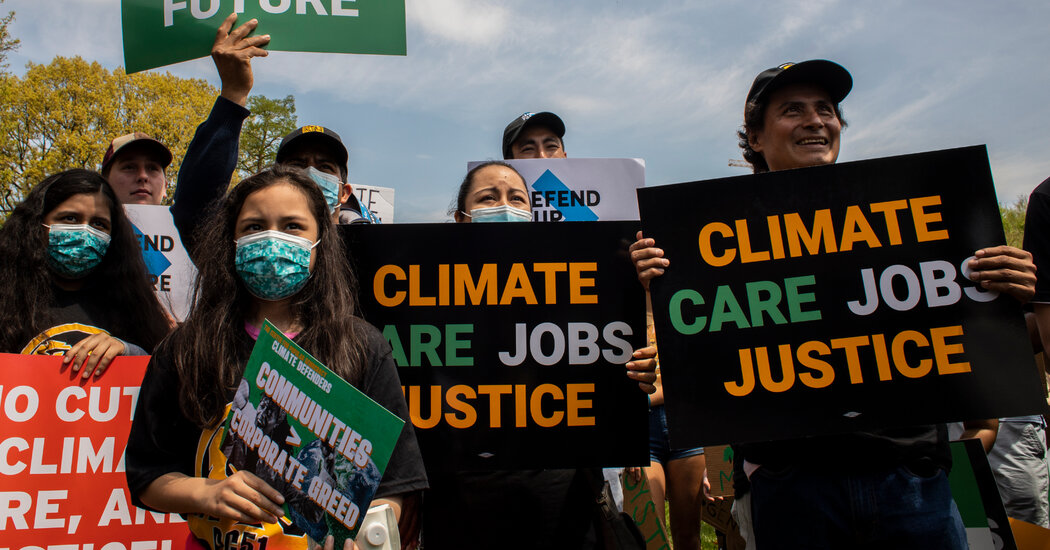 WASHINGTON — Environmental activists, distraught by the government’s slow pace of action on climate change, amassed in front of the White House Saturday afternoon, calling on President Biden and Congress to swiftly pass a climate bill that has been stalled in the Senate since December.

The White House demonstration was one of dozens of “Fight for Our Future” rallies held across the country to press the government to cut the pollution that is dangerously heating the planet, capping a week of events timed to coincide with Earth Day.

“We’re here because in North Carolina we keep getting hit by hurricanes back to back, and we ain’t got nothing fixed,” said Willett Simpkins, 68, a retired nursing home maintenance director from Wallace, N.C. “And it’s getting worse every year. It’s time for them to stop talking about it and do something about it.”

The event, which drew several hundred people under the pale green trees in Lafayette Park, was emceed by Rev. Lennox Yearwood of the Hip Hop Caucus, a nonpartisan group that tries to engage young voters.

Many in the crowd work for environmental organizations, but sprinkled among them were voters who wanted Mr. Biden to know that failure to enact climate legislation could cost him their vote.

Mr. Biden, who came into office promising urgent action on what he called the existential threat of climate change, has seen his ambitious plans pass the House but get watered down and stuck in the Senate because of unified opposition from Republicans as well as Senator Joe Manchin III, Democrat of West Virginia, a powerful swing vote in an evenly divided chamber.

Spiking gas prices because of the war in Ukraine have led Mr. Biden to take steps that are anathema to climate activists. He released a record amount of oil from the Strategic Petroleum Reserve and pleaded with oil and gas companies to step up drilling. In keeping with an order from a federal judge, Mr. Biden said he would open more public lands to drilling, despite a campaign promise to stop new oil and gas extraction.

Gracie Chaney, 27, a doctoral candidate in physics at the University of Maryland, said those actions felt like betrayal. “I’m pretty disappointed,” she said. “There were a lot of promises that he broke. It feels like we’re going back to the 19th century or something.”

The events come at a moment when scientists say the window is rapidly narrowing for nations to avoid tipping the planet into an irreversible future of more deadly storms, wildfires, floods, drought, food scarcity and mass migration.

Mr. Biden has pledged to cut greenhouse gases in half by 2050, a goal that is in line with what scientists say is needed from the United States to avert such catastrophes.

But if Democrats, who hold a razor-thin majority in Congress, do not enact major climate legislation within the next few months, many analysts say that window to meet that goal will slam shut. Republicans are favored to win control of at least one chamber of Congress in this fall’s midterm elections, and their steadfast opposition to climate action would likely doom the prospects for new legislation anytime soon.

Scientists have been declaring with increasing urgency that nations need to act now to avert a harrowing future. A major scientific report released earlier this month concluded that countries must immediately and drastically pivot away from the fossil fuels that have underpinned major economies for more than a century.

The Earth has warmed an average of 1.1 degrees Celsius (1.9 degrees Fahrenheit) since the Industrial Age largely because of human activity, namely the burning of oil, gas and coal. Scientists say that every fraction of a degree of heating translates into more frequent droughts, more violent storms, more species extinction — impacts that are already being felt in every corner of the globe. Once the Earth passes a threshold of 1.5 degrees of warming (2.7 degrees Fahrenheit), the likelihood of devastating heat waves, drought, wildfires and storms rises significantly, scientists say.

Brenda Mallory, the chair of the White House Council on Environmental Quality, reminded the crowd about steps the Biden administration has taken to cut pollution. But she emphasized the need to pass his stalled legislation, which would provide more than $500 billion in tax credits designed to speed the country’s transition to wind and solar power as well as to electric cars.

“President Biden will use every lever, use every tool, and push every resource to tackle climate change,” she said. “But Congress must act, too.”

Mr. Simpkins has followed Mr. Biden’s actions, including a crackdown on planet-warming methane that leaks from oil and gas wells and a ban on hydrofluorocarbons, a greenhouse gas produced by refrigerator coolants.

Mr. Simpkins voted for Mr. Biden in 2020, but he said that if Mr. Biden fails to deliver strong climate laws, he will sit out the 2024 election. “I hate to say that, but I wouldn’t vote,” he said.

War in Ukraine: The making of a new Russian propaganda machine