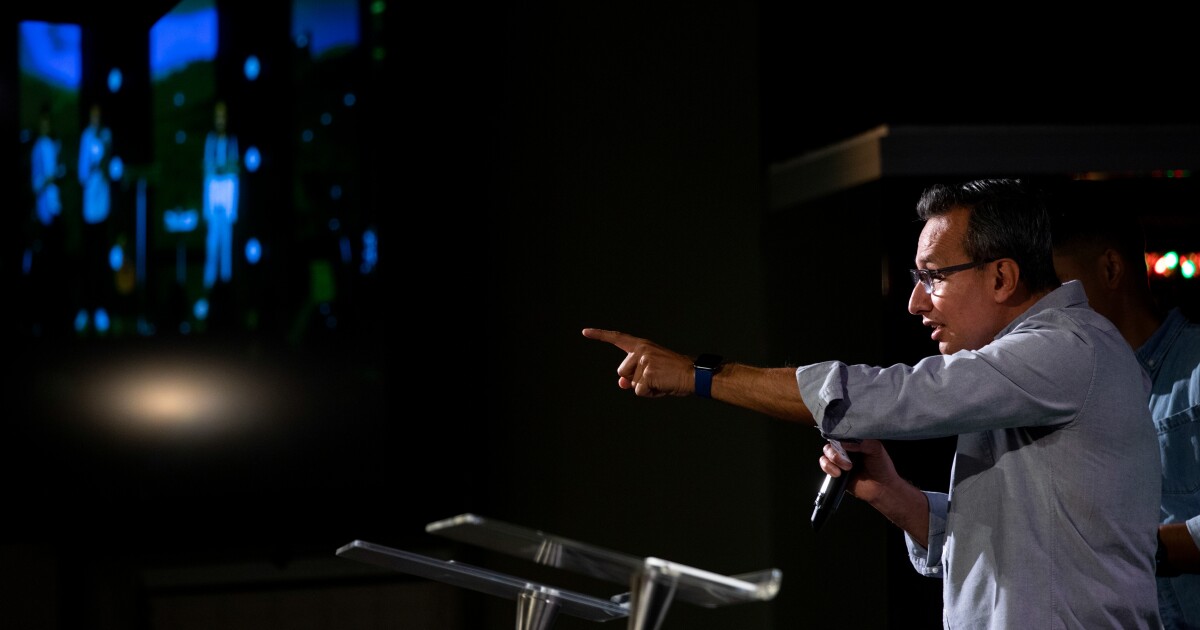 For Pastor Netz Gómez and the 1,500 members of his Houses of Light church in Northridge, the Supreme Court’s ruling to overturn Roe vs. Wade was an answer to their prayers and decades of hard work.

“We are thanking God that this injustice has finally been rectified, and that states have the right to decide how they want to proceed with abortion rights,” said the pastor, a Mexico native who started the church in his living room 22 years ago and has steadily immersed himself deeper into U.S. politics. “But we are really thanking God because we have prayed so much for the end of abortion. Abortion is injustice. Killing babies is injustice.”

It was one of the broad range of responses to the court’s momentous ruling that has divided members of the same faith across Southern California, including sometimes within the same congregation.

For some among the Christian faithful — particularly many Catholics and evangelicals — the ruling that allows states to decide whether and in what circumstances abortions will be legal, if at all, represents a long-hoped-for step toward saving precious, unborn life. For others it’s an incomprehensible attack on women’s fundamental right to decide what’s best for their lives and their families.

On Sunday, 30 miles to the south and east of Houses of Light, the Rev. Alfredo Feregrino, associate rector of All Saints Episcopal Church in Pasadena, said that he immediately knew he needed to rewrite his sermon when he learned of the Friday ruling from a flurry of text messages and emails.

The church hosted a vigil Friday night with Planned Parenthood Pasadena and San Gabriel Valley to grieve the loss of the constitutional right that was established in 1973 and reaffirmed in 1992, and had hung a red banner declaring “Abortion is Healthcare” outside the church for weeks.

In a sermon Sunday morning inside a chapel adorned with rainbow flags, Feregrino said the decision would have the most severe effects on people living in poverty, those with low incomes, and people with inconsistent access to healthcare. If this decision were truly about protecting babies, he said, there would be “months and months of parental leave for everyone,” free diapers and formula, universal preschool and other support for parents.

The congregation clapped and cried out in assent.

In the hours after the Supreme Court’s decision to overturn Roe vs. Wade, Archbishop José H. Gómez of Los Angeles who leads 5 million Catholics in 288 parishes in the L.A. area, and who has played an influential role in the abortion debate, released a statement applauding the ruling.

“For nearly fifty years, America has enforced an unjust law that has permitted some to decide whether others can live or die; this policy has resulted in the deaths of tens of millions of preborn children, generations that were denied the right to even be born,” he said.

Despite these strong words, the court ruling didn’t explicitly come up during the homily at Sunday’s service at the Cathedral of Our Lady of the Angels in downtown Los Angeles, blocks from where protesters had gathered over the past three days. Gómez declined to comment further on the church’s stance toward the ruling.

Some of his congregants’ comments reflected the divisions inside the Catholic church. Polls have shown that lay Catholics’ opinions on abortion are more nuanced than those of their leadership. According to the Pew Research Center, 76% of Catholics say abortion should be illegal in some cases, but legal in others while just one-in-ten say it should be illegal in all cases with no exceptions.

Some at Our Lady of the Angels said they supported the ruling. Standing outside the gates of the Cathedral following Mass, 70-year-old Vicky, who declined to give her last name, said that life and death should be in the hands of God.

Others disagreed. Eric Ruino, a nursing student at Johns Hopkins University, said he supports people having the right to have an abortion.

“It’s cool that the Vatican has its thoughts and it’s changed over the years, but in terms of where we are now and are as a society and what we do, I think having that overturned is just having us going backwards,” he said.

Rafael Hernandez, a Catholic who attended the Cathedral’s noon service and supports abortion rights, said it is important to establish your own identity and opinions regardless of the religion you practice.

“I’m Catholic, but a lot of the times I’m against things the Catholic Church has done. But my faith is separate to that,” he said. “I come to church to hear the readings and listen, not to judge those around me.”

“Personally, I would never have an abortion. But I don’t believe I should make that choice for somebody else,” she said. “I should never have to put my views on someone else, just like I don’t want anyone to put their views on me.”

In L.A.’s West Adams neighborhood, the Rev. ST Williams Jr., pastor of the 97-year-old St. Paul Evangelical Lutheran Church, a historically African American church, said that the ruling “set us back as a nation, a people and a culture.”

Williams, who shepherds a congregation of 375 families of Black Americans, as well as Caribbean, African and Latino parishioners, many of them immigrants, said the nation already was on edge because of COVID-19, mass shootings and inflation.

Telling people “they no longer have a right to choose” will not allow for proper family planning and will affect those who can least afford to have children.

“It’s a sad day as a Lutheran Church minister because it will cause a lot of chaos and calamity,” he said of the ruling. “You’re not allowing people to be who they want to be.”

Pastor Steve Lee, the head pastor of Gereja Injili Indonesia Los Angeles of Azusa, also known as the Indonesian Evangelical Church of Azusa, said that for him, the overturning of Roe vs. Wade was personal.

Twenty years earlier, Lee and his wife received news from a genetic counselor about their pregnancy: Their daughter, the couple’s first child, would be born with Down syndrome.

Lee and his wife carried the child to term. Six months later, their daughter was born without Down syndrome.

“What struck us, as we looked back, was the idea that some in society view a Down syndrome child as less than a person, that it is undeserving of life,” Lee said. “All life should be treated with dignity.”

Lee understands there will be celebrating for some and anguish for others. What he’s most afraid of, however, is the growing schism among Americans of opposing views.

“Thoughtful Christians also see the greater division, which is expected, but there is greater violence and hatred that has become the norm,” he said. “The vitriol that is and continues to come will only spark more violence and destruction of life.”

Although the politics of abortion and religion have centered on Christians of various stripes, representatives of other faiths spent the weekend weighing the implications of the court’s action.

In a sermon delivered Saturday morning, Rabbi David Wolpe of the conservative synagogue Sinai Temple in Westwood acknowledged that speaking about the Supreme Court decision from the pulpit was difficult, and that he expected people would disagree with his message. Ultimately, he said, Jewish law is unequivocal that it is not murder to have an abortion, but it is also clear that a fetus is a potential life.

Wolpe supports a woman’s right to decide whether she wants to have an abortion no matter where in the United States she lives, but he also said he won’t vilify those who disagree with him.

“I make, and I hope you do, a presumption of goodness with those who disagree with me,” he told the worshipers. “I don’t think on one side people are careless about life, or that on the other side people don’t care about women.

“I think this is a deep, divisive issue.”