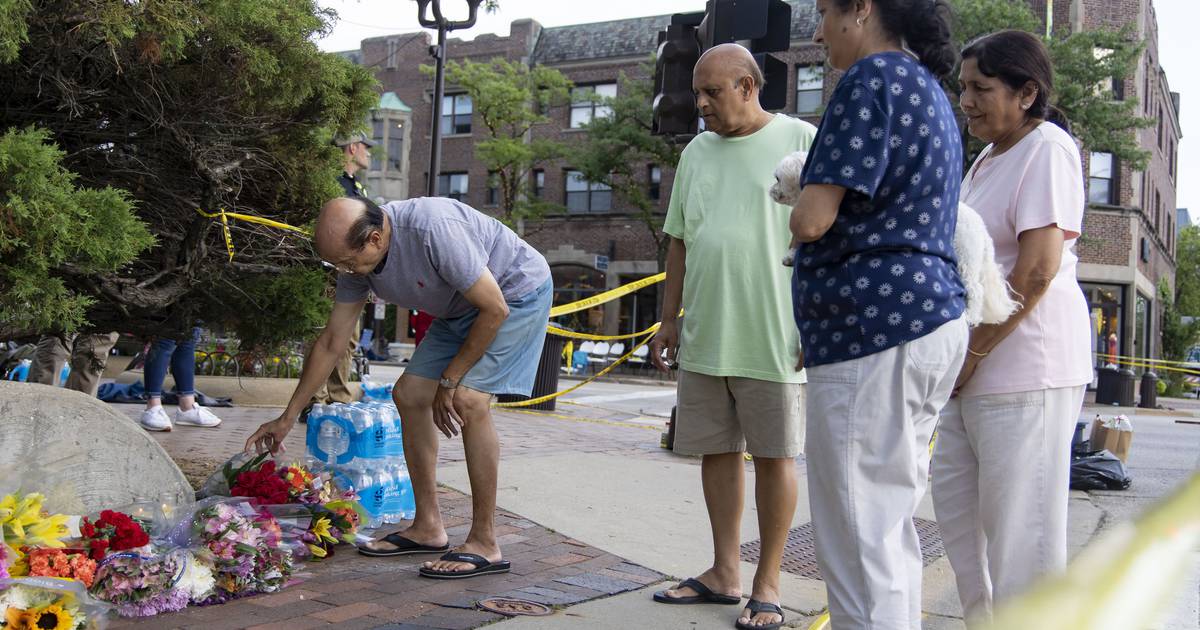 Members of the Highland Park community came together to grieve Tuesday after seven people were killed and more than two dozen others injured in a mass shooting during the town’s Independence Day parade.

In the first of several vigils, about 60 people gathered in a gym at Trinity Grace Church in Highland Park. Several pastors from nearby Christ Church attended, said Jill Carter, executive director of creative arts and communications for Christ Church. Carter said they weren’t able to host a vigil in their church because it was still roped off by police as part of the shooting scene.

The suspect in the shooting, Robert “Bobby” E. Crimo III, 21, attended Christ Church off and on for the past several years, Carter said.

”It has just shattered our communities and shaken all of us,” Carter said. “Our Highland Park campus is located just blocks from where the tragedy occurred, and many of our members live in Highland Park and were impacted.”

The church’s Highland Park congregation has about 100 members, she said.

Carter said the community will need “lots of prayer, lots of conversation and lots of making our pastors available for our attendees and for others in the community that may need to process through such a horrific event that happened right in the shadow of our steeple.”

Andrew Gadsden, who leads worship services at Christ Church, spoke to those gathered Tuesday afternoon at Trinity Grace Church. “It’s hard to thank God that you’re still here when so many people lost their lives,” he said before singing into a microphone at the front of the room.

Others joined him in singing, some standing up and raising their arms: “Lord, I need you, oh, I need you. Every hour, I need you. My one defense, my righteousness. Oh God, how I need you.”

A man walked over to the side of the room to hug a woman who struggled to hold back tears.

Gadsden said he decided to attend the vigil to show his support and was asked to sing.

“Anytime we deal with a tragedy, though we may seem to be divided for whatever reasons, or so many reasons, it’s very important for us to be able to come together to unite for the cause, in this case, of healing,” he said.

Gadsden said it’s important for members of the community to be there for one another.

Later Tuesday, more than a hundred people gathered at North Shore Congregation Israel synagogue in Glencoe as a choir hummed in varying pitches, harmonizing to the sounds of a guitar and base.

In between songs, speakers sermonized and prayed.

At one point, a woman read the names of the six identified victims.

“Jewish tradition teaches that each life is a world,” the woman said. “Yesterday and today, seven whole worlds were destroyed.”

Sarah Weiss, who is converting to Judaism, her husband and her in-laws attended Tuesday night’s vigil at the synagogue.

She and her husband were at an airport in Colorado on their way back to Chicago after a holiday weekend trip in Boulder when she got a news notification on her phone about the mass shooting.

”Immediately my heart just sank,” Weiss said. “You know, we’ve all been collectively experiencing these mass shootings all over the country, and for it to land in your neighborhood was surreal and shocking still, and just devastating.”

They called family right away to make sure everyone was OK. Her in-laws were at the parade, farther down from where the shooting happened, she said. They saw people running and they ran into their home off Central Avenue, letting others into their home to ensure their safety, Weiss said.

She said she hopes government leaders will act to change gun regulations and gun policies to try to prevent mass shootings from continuing to happen.

In the meantime, it’s important for the community to come together and for the church to hold space to “reflect on the unfortunate events and collectively create more peace and love in hopes that something like this won’t happen again in the future,” Weiss said.