Chris Wilder: The man who made Sheffield United fans fall in love again 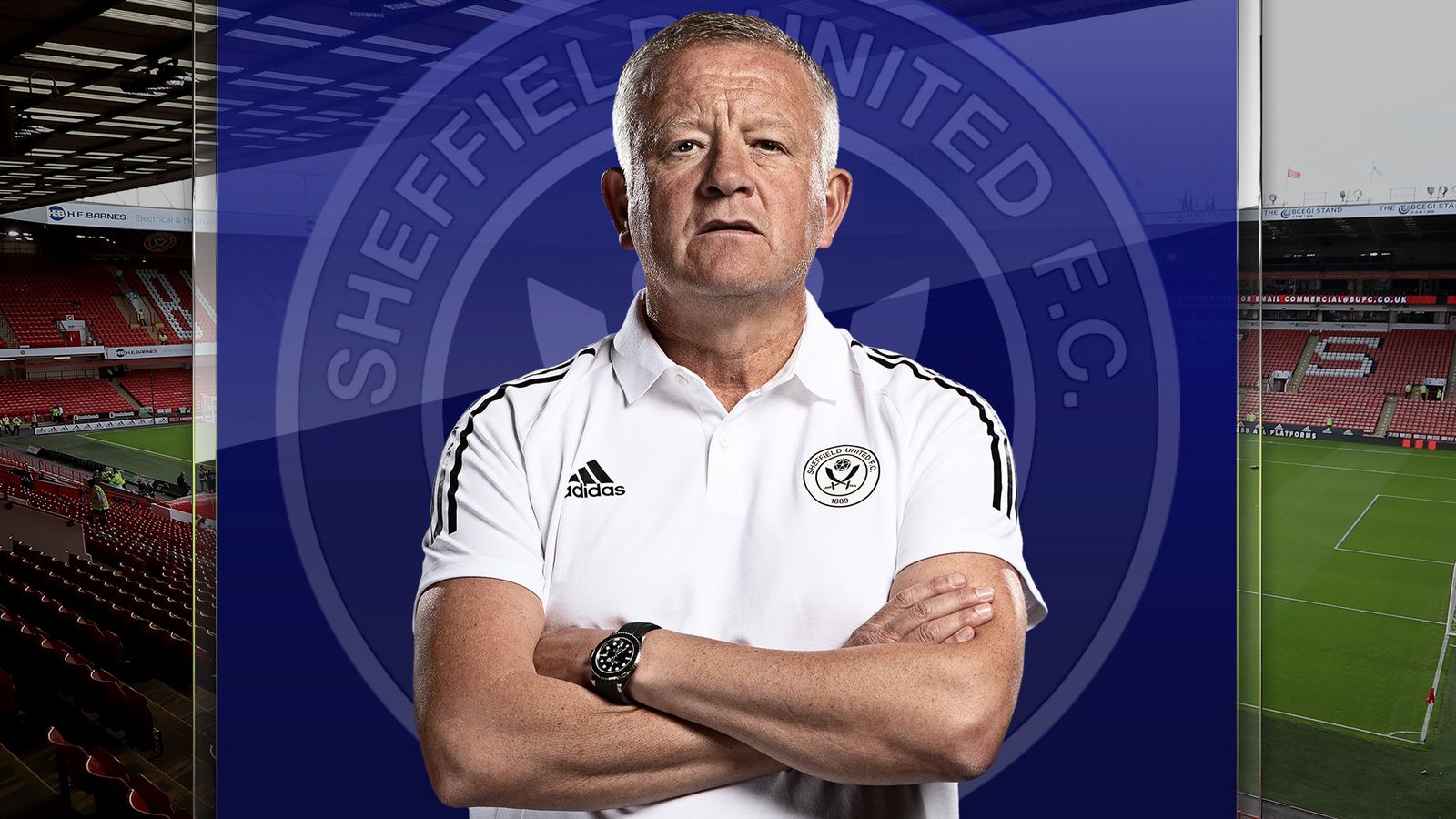 It is the day Sheffield United fans never wanted to contemplate but the Chris Wilder era is over and his departure will likely wound the Blades more deeply in the long run than the manager who made a fanbase fall in love again.

Six years in League One then Chris Wilder came home.

There have been few more remarkable modern football stories than how the lad who looked longingly out onto the Bramall Lane turf as a ballboy, who would pull on the red and white and later pack into the Kop with his pals, led his club from the stagnancy of the third tier to a top-half finish in the Premier League.

Nine months on, as the unthinkable challenges of a pandemic have endured, the emotional upheaval taken its toll, the financial realities of the top flight been laid bare, and – crucially – fundamental differences been exposed, Wilder and Sheffield United have parted ways and the separation will sting deeply.

The Blades remain rooted to the bottom of the Premier League, preparing for the Championship a season later than so many, so logically predicted after feeling the bite of significant injuries and football in soulless stadia.

That they had amassed more unwanted records than points by the turn of the year would likely have cost the jobs of other managers at other clubs yet Wilder was no ordinary manager.

“We’ve never been a glory club,” the man who fought his way up the English football pyramid would often say.

But the triumphs instead came and kept coming against all expectation: a club-record 100 points to claim the League One title in his first season, promotion from the Championship with a budget more suited to a survival scrap, an unimaginable European challenge on the biggest stage.

There were moments to last a lifetime.

Like the demolition of their fiercest rivals in the first Sheffield derby for five years. Like the afternoon against Ipswich, edgy until Jack O’Connell rose to score a goal immortalised by Daniel Mann’s commentary: That’s the one! Forget the maths! The Premier League beckons for Sheffield United! Like Billy Sharp’s bundled late equaliser at Bournemouth on their big return, or results at Stamford Bridge and the Emirates; scorelines that showed they were back and they belonged.

But the Wilder era, more than anything, was about how a fanbase came to feel.

It was rebirth and renewal and old romance stirred as the scars of late collapses and play-off failures finally faded.

It was identity and connection after the toxic apathy of Nigel Adkins’ short reign and a soul-destroying season-ending lap of dishonour.

It was the Greasy Chip Butty anthem that caught proudly in the throats of fans who had finally had their club back, the magic of matchday restored across generations, the red that steadily enveloped the blue across the city.

It might have seemed fanciful in the modern game but Wilder felt like their Shankly, their Sir Alex, and he was one of their own.

In the terraced streets surrounding Bramall Lane and far beyond, they loved how he played it straight when he spoke, how he understood earthier demands in a famous but no-fuss football city – “Win tackles, win headers, win races,” was a favourite mantra – and how he succumbed himself to tribal instincts.

Tipsy on promotion and Italian beer, Wilder delighted in jibing Leeds after winning a rollercoaster race to the Premier League. He relished telling Sky Sports how he wanted United to lord it over Wednesday in words unsuitable for print. He felt sheepish after celebrating one night against Coventry with a face-first Klinsmann dive but would later chuckle, knowing he had simply surrendered to the moment along with all those like him behind his dugout.

He was, in his words, “living the dream for all his pals” and players as well as supporters thrived off the co-dependency he cultivated.

His patchwork squad knitted together cast-offs and write-offs but the likes of Chris Basham, John Fleck and David McGoldrick were individuals who grew bigger and broader in his unit. While the quality to decide a Premier League match proved too often elusive this term, their commitment to Wilder never waned.

The Blades’ remarkable rise was fuelled by irresistible energy and alchemy but genuine tactical innovation too.

Their overlapping centre-backs were fashioned by Wilder and long-time assistant Alan Knill out of necessity back when more limited League One sides sat in but the artistry of the overloads startled the likes of Marcelo Bielsa and Pep Guardiola and soon slipped into football lexicon with the world watching.

Wilder, long backed more quietly by another managerial luminary in Sir Alex Ferguson, was happy for outsiders to dismiss the “gruff Yorkshireman in a tracksuit” – the sort of casual assumption to be pinned on the dressing room wall with the rest about his “journeymen” from the “pub league” – because he knew he and his tight-knit backroom staff were modern in their methods and upwardly mobile.

He was relentless on the pitch but also in pursuit of improvements off it, his “fingerprints everywhere,” as those behind the scenes at Bramall Lane put it.

But as the ambition of the 2019 LMA Manager of the Year could not be matched by those above him, and as his remit came increasingly under threat, relations with his employers became ever more strained.

Desperate for the club off the pitch to catch up with the team on it, he was the driving force behind plans to transform a new training ground from the “old working men’s club” he saw befitting a bottom-half Championship side and hindering recruitment.

It was just one of many warnings Wilder fired at warring co-owners Kevin McCabe and Prince Abdullah, before the latter gained sole control after a bitter court battle. Delivering Category One status to the club’s neglected academy was another.

Wilder would in fact sign a new long-term contract just months after the Saudi’s legal victory, allaying fears the club was set to change course, but a lack of progress under the new hierarchy when it came to infrastructure continued to rankle long before the shock of a global pandemic.

Tensions reached boiling point at the start of this year as Wilder questioned the direction of the club during an angry showdown that almost saw ties cut.

Shorn of key players like Jack O’Connell, Sander Berge and John Egan to long-term injury, the manager had hoped for reinforcements early in the transfer window but faced resistance from a boardroom braced for relegation and even warnings over his candour. Prudence had legitimacy but Wilder saw the U-turn as a white flag.

More than £50m was spent on transfer fees in the summer transfer window on the likes of Aaron Ramsdale, who endured a difficult start, and Rhian Brewster, who has yet to score a Blades goal, but Wilder’s hopes to pivotally raise the wage bill for proven performers were scuppered. Callum Wilson, Ollie Watkins, Ross Barkley and Matty Cash were all earmarked but out of range and a subsequent strategy to focus on young potential left the squad short for the present.

Wilder had generated funds for an outlay still dwarfed in the division but club chiefs are understood to have been keen to see him step back from recruitment and suggested structural change was a further source of conflict.

The 53-year-old, whose hands-on style had been key to the club’s rapid rise, was resistant to plans that would have seen him potentially work as a head coach under a technical director but had become resigned to that direction of travel.

The signing of Ismaila Coulibaly – loaned straight to Beerschot, the Belgian side co-owned by Prince Abdullah as part of umbrella company United World – was symptomatic, with the manager understood to have been sidelined from the process.

As trust and communication broke down, the end of an era loomed large.

Wilder had described last season as the “perfect storm”; a heady mix of momentum, vociferous backing, a fit, settled side playing with confidence and tactical panache to achieve the unthinkable.

The winds this term swirled unforgivingly in the opposite direction, the club’s limitations and deficiencies brutally exposed at the sharp end of the game, but Wilder retained the backing of an overwhelming majority of supporters, even as an upturn in results proved only short-lived.

The hope was that the club could take their cue from Burnley or Norwich; that stability under the manager who had propelled them to the top flight after years in the wilderness would afford them the best chance of returning there stronger and wiser.

Prince Abdullah had championed that line of thought, insisting back in December that he would stick with Wilder “no matter what” but though Wilder spoke recently of his desire to help United back to the top, his words hung heavy with the caveat: “If we stick to the plan”.

It was public cajoling in the hope of prompting assurances of conditions he believed were in the club’s best interests, conditions he is sure to have believed he had earned into next season, but instead it appeared to only harden divergent views.

The plan has not been a shared one and the ramifications could be far-reaching.

A club statement late on Saturday evening spoke of intentions “to keep the core of the player group together… invest further in the academy and first team” but a rebuild without the manager whom captain Billy Sharp among many others has called “the greatest in their history”, whose DNA has for five years imbued every fibre of the football club will be a significant task.

The backlash from angry and dismayed supporters is already fierce. Many, long familiar will boardroom wrangles and wrong turns, will uneasily recall Neil Warnock’s acrimonious exit in 2007 and the downwards spiral precipitated by a string of ill-judged appointments. Most will simply feel a deep sense of sadness.

He stitched Sheffield United back together, took his club on a dizzying journey and made a fanbase fall head over heels again. It was not meant to end like this but it was, and always will be, some homecoming.